A trawler that had been anchored off the Santa Barbara shoreline at Montecito, cut loose during the high winds of the week of May 17, 2021, and began drifting down the coast toward Carpinteria. People called and could get no one to help. Technically, there is a jurisdictional line in the ocean between City and County at the end of East Beach, and this wreckage cut loose on the County side, so no harbor patrol boat could go out after it as it drifted.

The boat hit the beach at Sandyland/Padaro on Friday, May 21, 2021. Boat wreckages on County beaches are handled by the Santa Barbara Sheriff’s Department, which has no boats but has the strings to State grant funding to clean up such mishaps. It involves days of paperwork and bureaucratic gotta-dos, that takes so long the ocean eats up the boat in the meantime, spreading toxic materials, gasoline, batteries, pieces of boat, and metal far and wide. 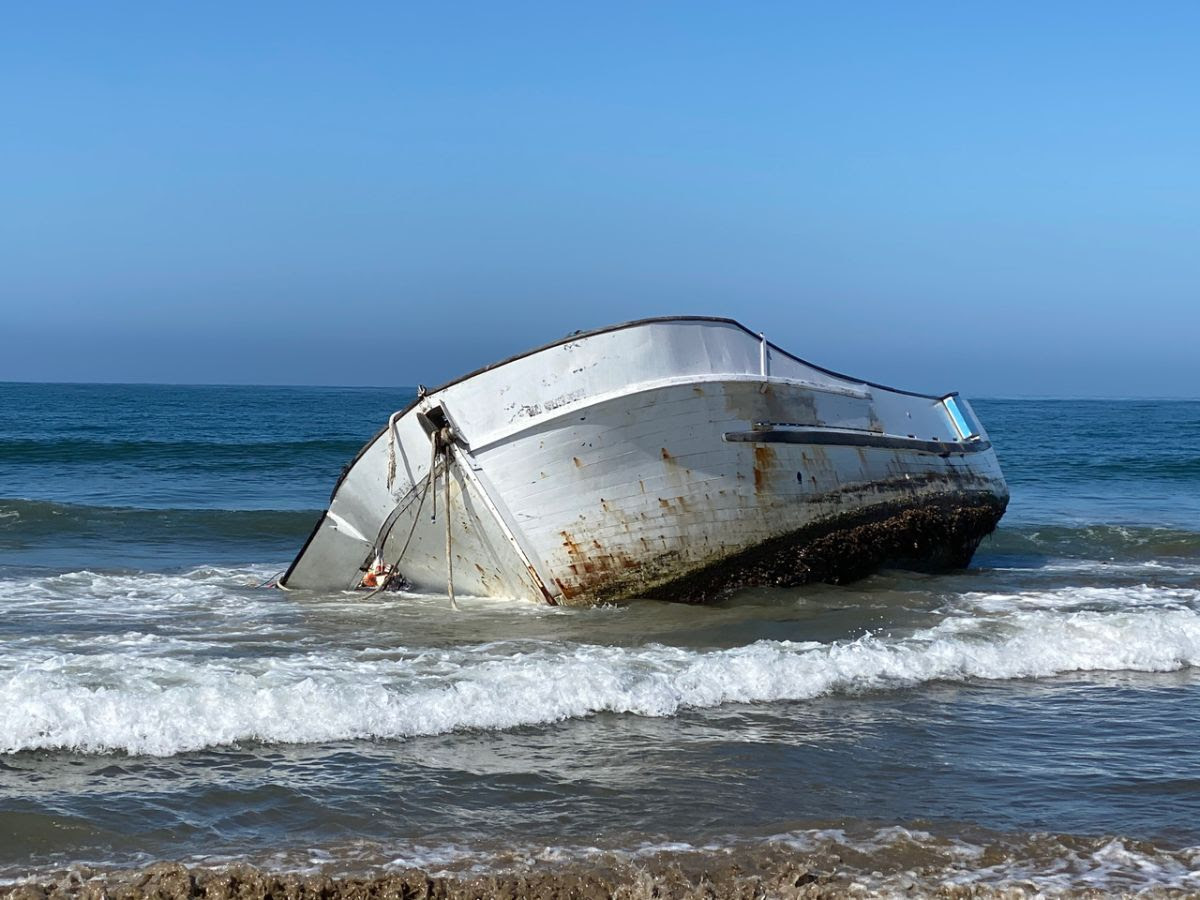 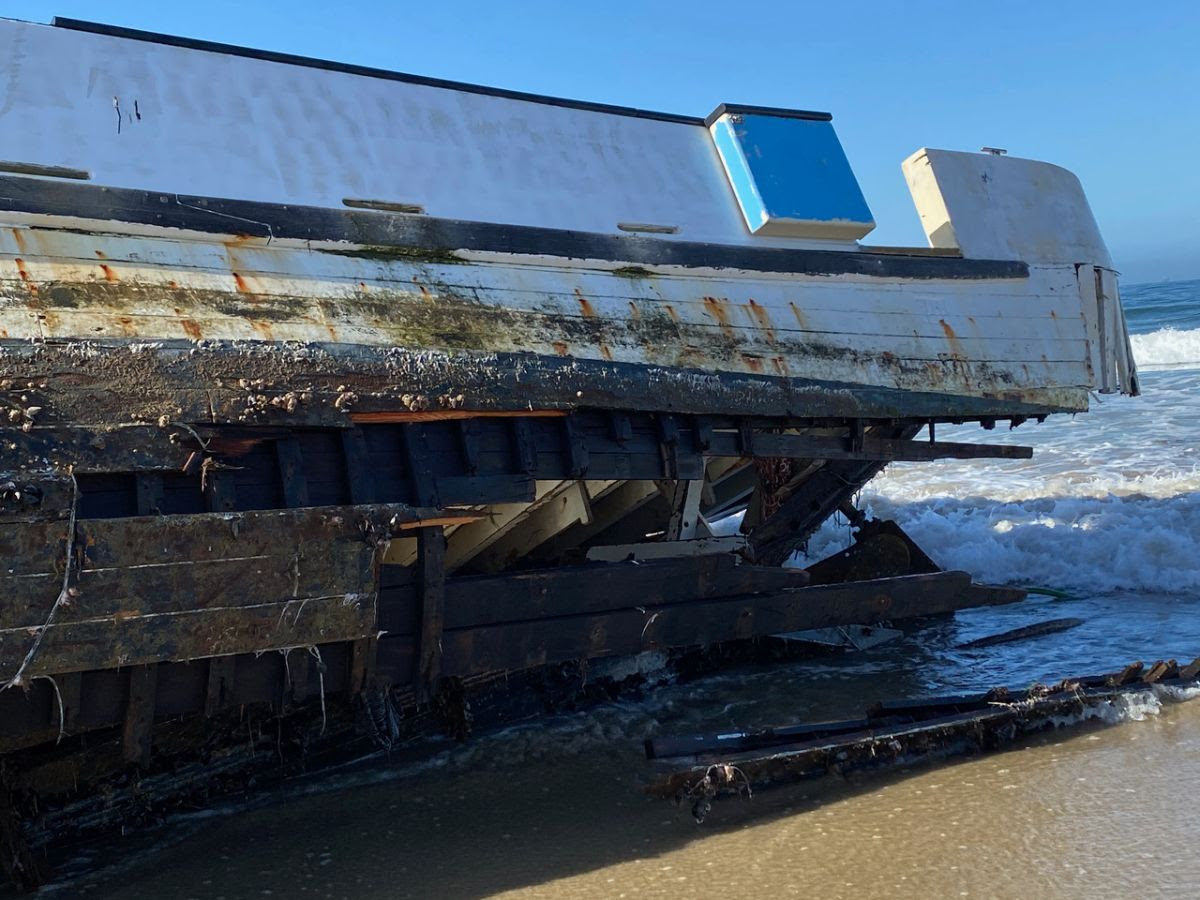 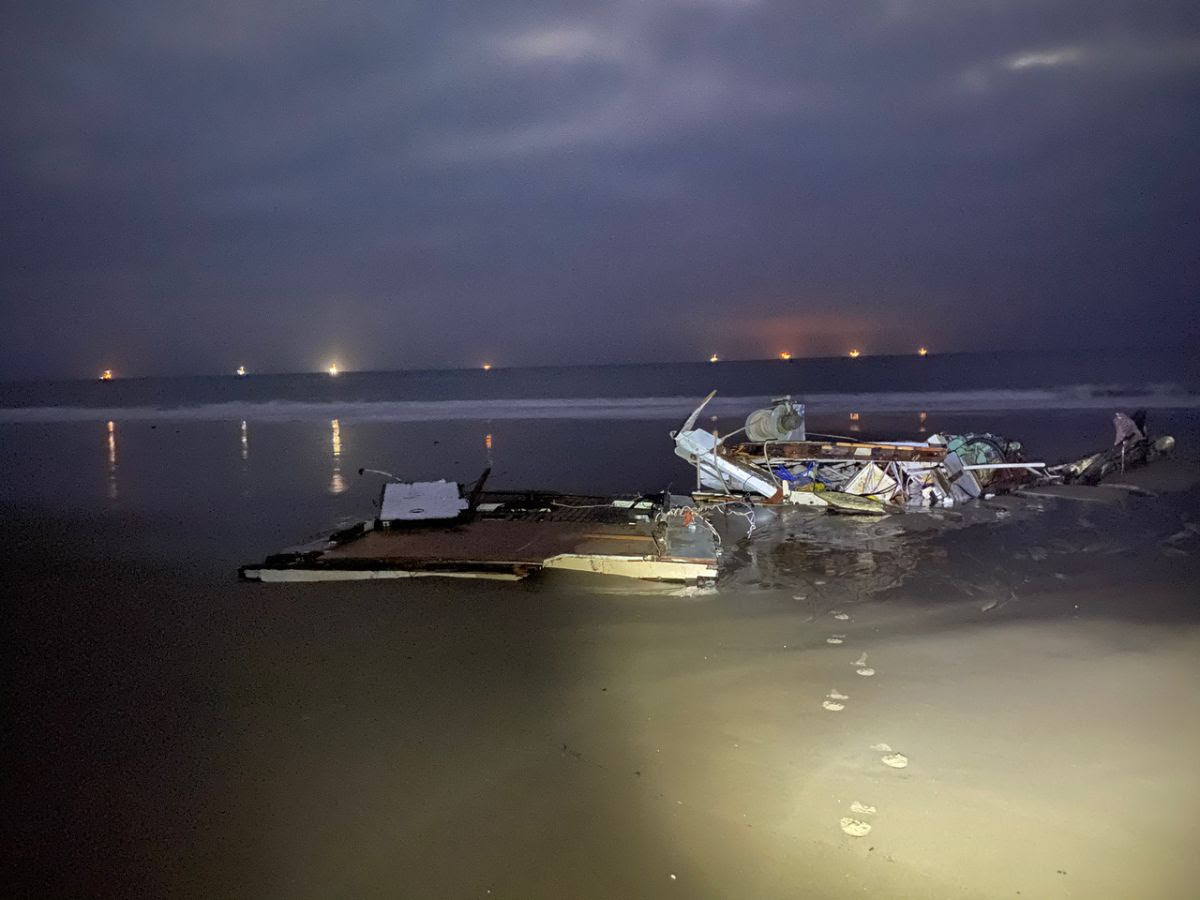 The boat pictures here, all by Harry Rabin, show how fast the sea will eat up a vessel if it’s not removed FAST. The sequence shows what one day in the ocean will do to a beached boat. When Harry arrived at the Sandyland/Carpinteria beach at 5 a.m. Friday morning, he was shocked by what he saw. During the night the ocean had slaughtered the boat, eaten it up, spreading oil, batteries, Styrofoam insulation, and other toxic materials, together with gas tanks, engine parts, and wooden pieces of the boat up and down the coast for 4 miles.

HTO Field Advisor Harry Rabin had already been at work the moment the boat hit the beach. Working with beachfront homeowners to gain access, Harry had led MarBorg workers through private front yards to grab by hand what could be walked through private property. Heal the Ocean, meanwhile, has always had an excellent relationship with Union Pacific Railroad, and when Executive Director Hillary Hauser called our contact at the railroad, the phone was answered almost immediately. We asked for permission for MarBorg to cross the tracks with heavy equipment during low tide, which fell on Friday, May 28, at 5 a.m. MarBorg needed at least three hours to get down to the sand and pick up the mess – which meant the train schedule had to be delayed or slowed down while the operation got in and out. We got an immediate YES from Union Pacific.

Despite the difficulties, the cleanup was done by 4 p.m. that day. By the time MarBorg replaced everything and cleaned up the area, you would not have known anything had gone on there. The tracks were checked by a Union Pacific RR work car, which found the area spotless.

The Hero of this episode is Brian Borgatello, who came up with solutions right and left, including the problem of the extremely heavy trucks getting stuck in the sand as they headed back over the RR tracks. And praises also be to Harry Rabin, who was on-site for six days in a row, morning to night, including working alongside Brian Borgatello and his workers on the big day of the boat removal, coordinating with Union Pacific. Heal the Ocean also thanks Lupe Valdez of Union Pacific, and Javier Sanchez, manager of track maintenance. We thank the Sandyland homeowners, who gave us permission to go through their front yards to the beach. MarBorg Industries is a miracle operation at times like this. Brian Borgatello, president of MarBorg, gathers his heavy equipment, trucks, forklifts, and other gear – plus a fabulous crew of workers. The general operation involves crunching the boat up into pieces, loading up big trucks with it, and hauling it off. The trouble with this particular wreck was that it was on the beach on the other side of the Union Pacific RR tracks. To get all this heavy equipment over the tracks was the vital key to getting at the wreckage. 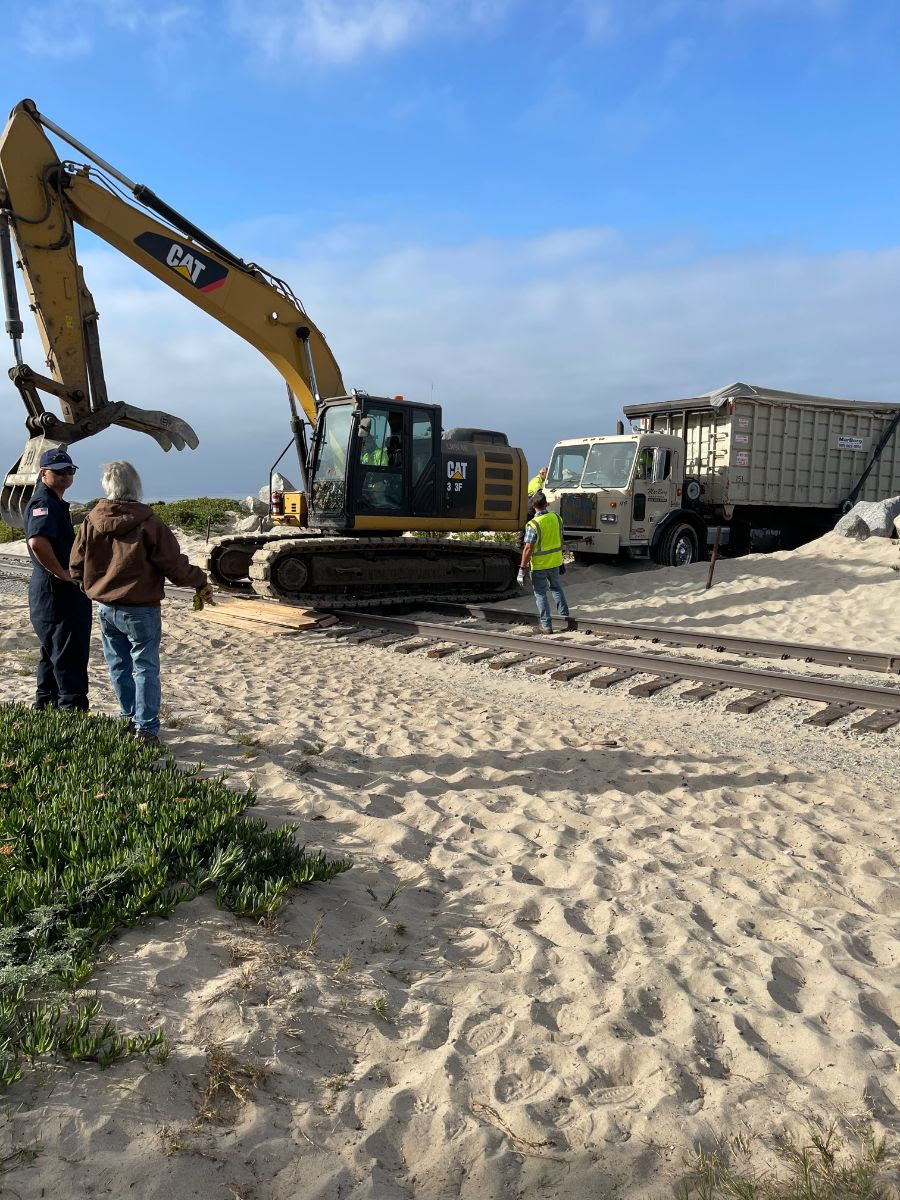 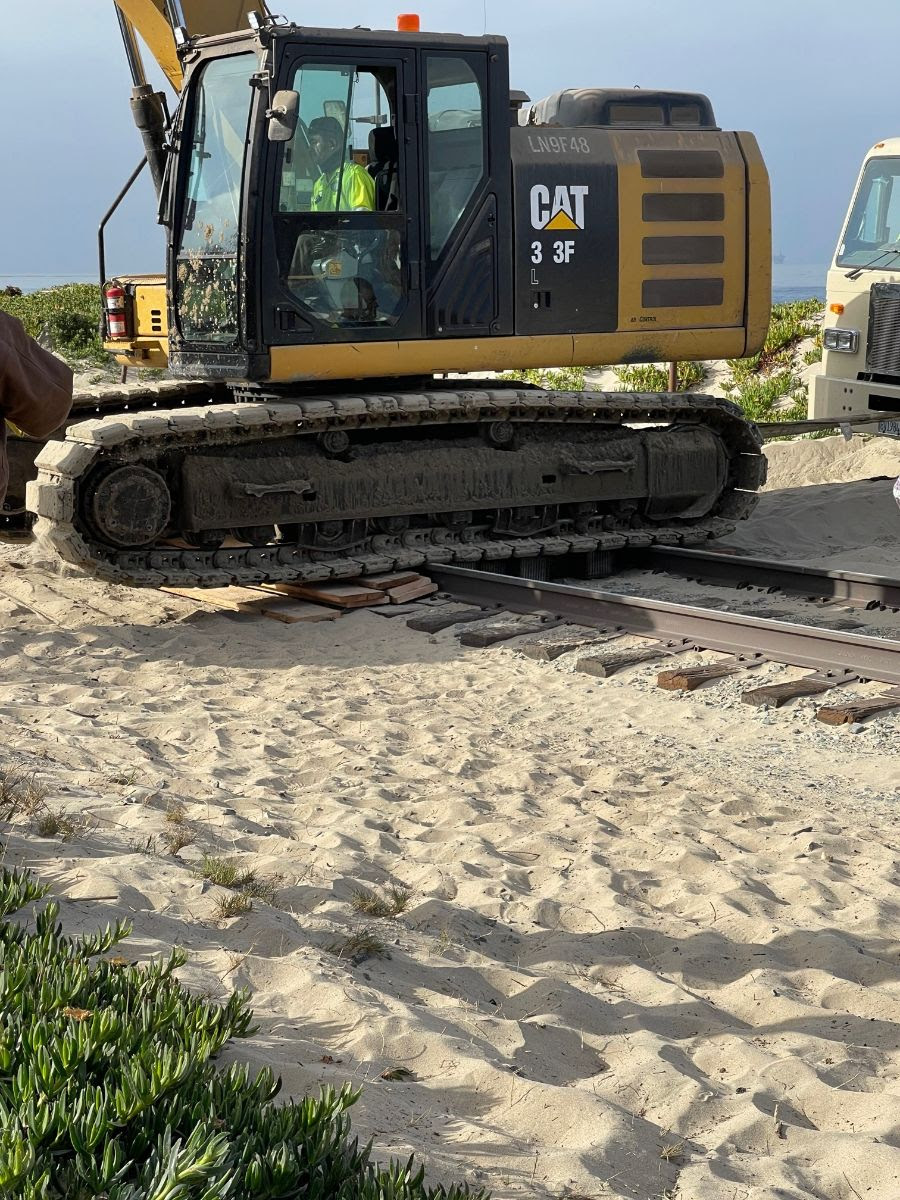 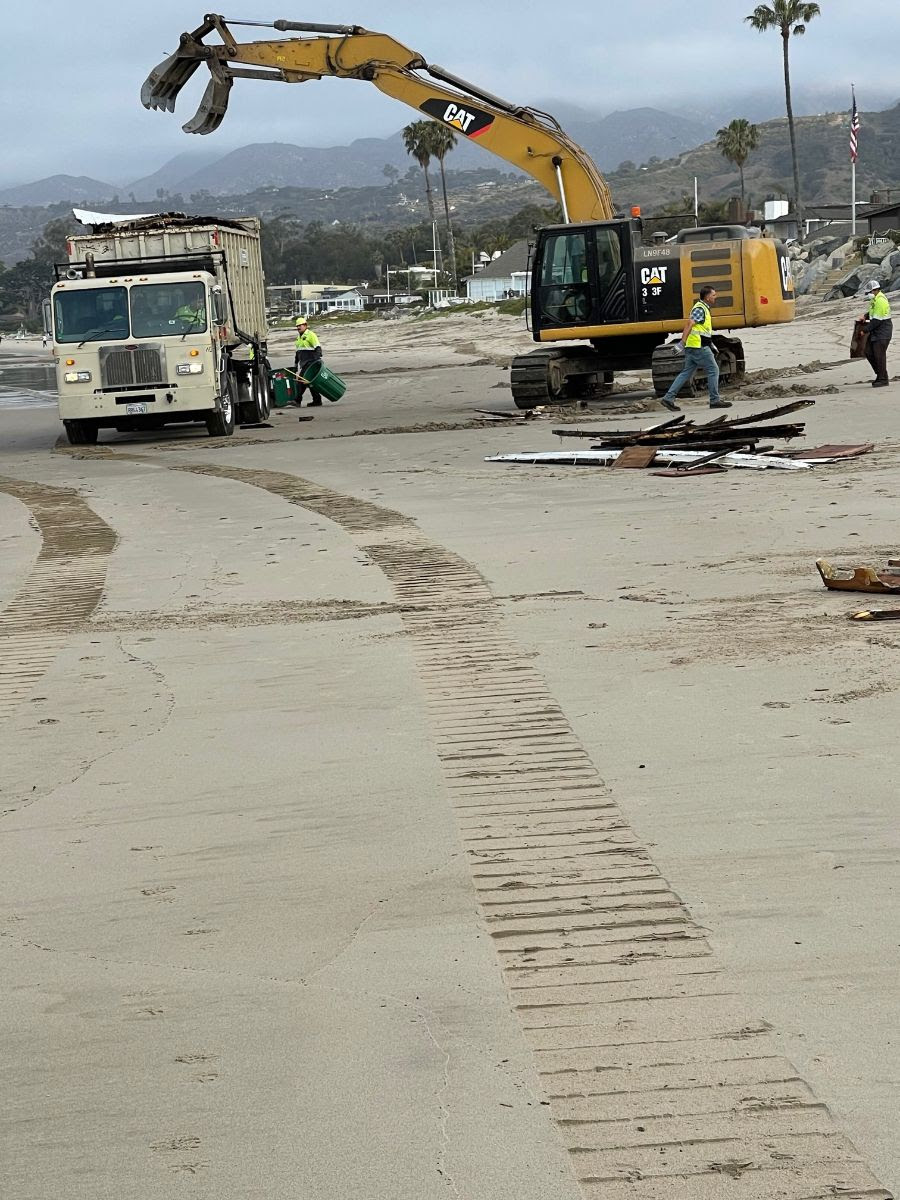 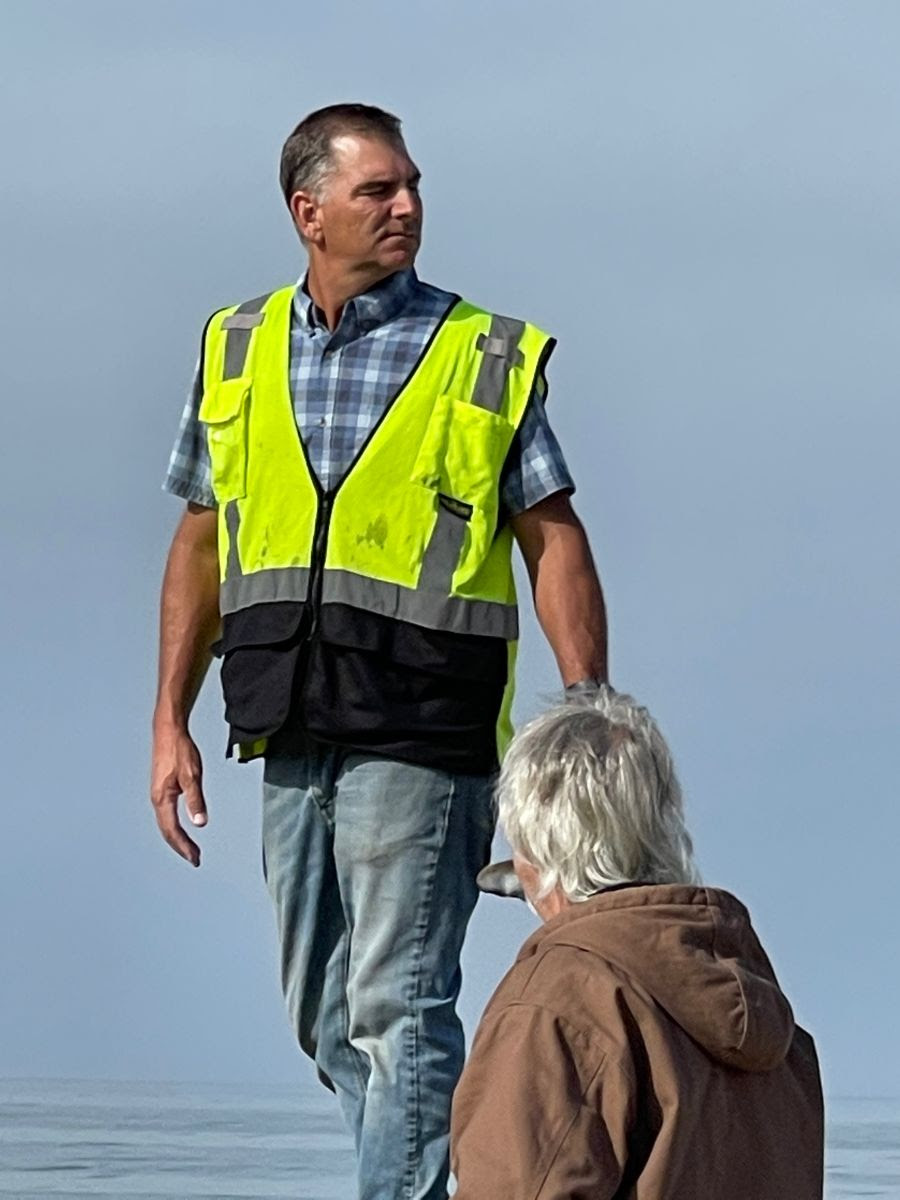 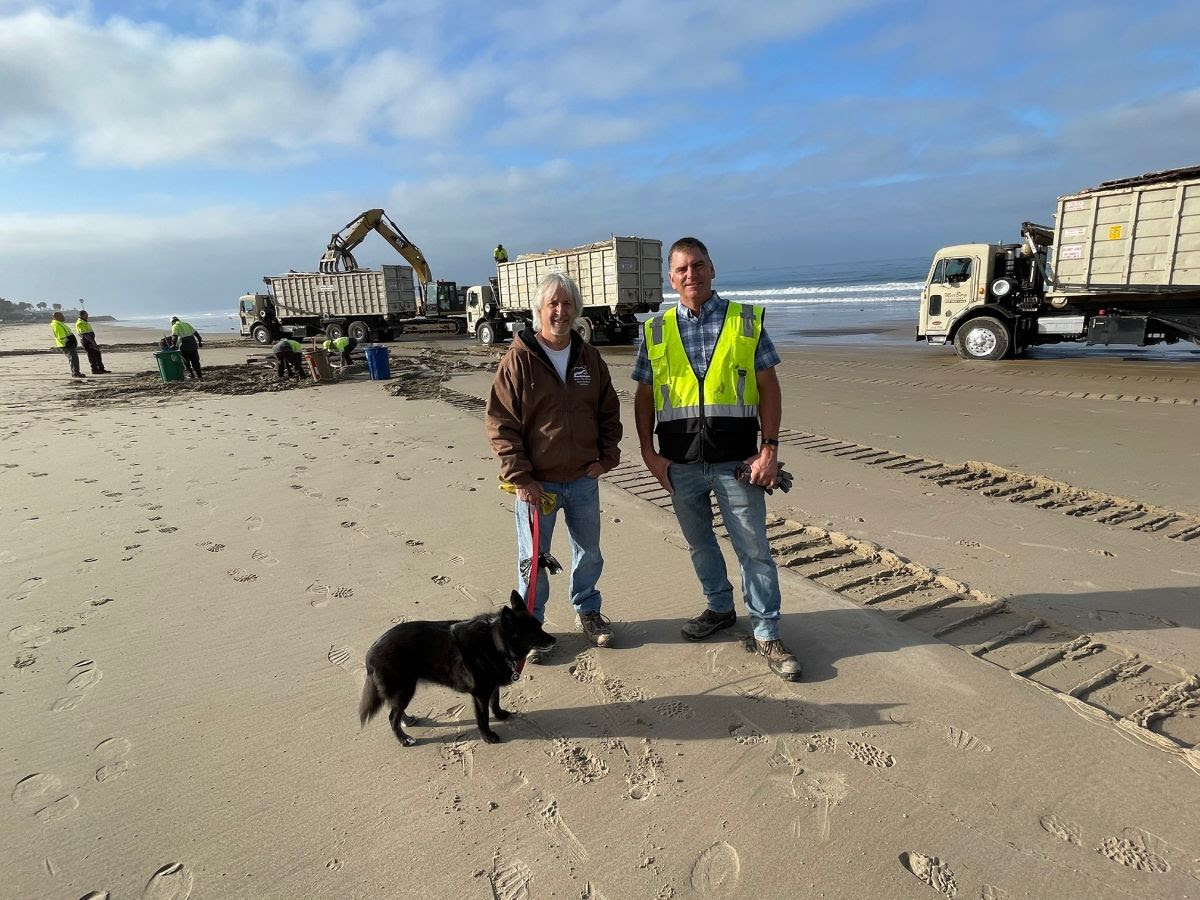 Heal the Ocean is already at work about the problem of this jurisdictional ocean stuff. We are working on getting a designated vessel, or the City harbor crew to help at such moments – to spring into action the moment a boat cuts loose. We also feel that derelict boats should be removed from the ocean if they’re not moored on a proper City anchor, especially if they are non-operable and/or unattended.

For a view of the Derelict Boat Cleanup Operations, click here for a video and newscast made by our maestro of the news, John Palminteri.

Show Comments
Heal the Ocean Tackles That Boat on the Beach

Very interesting article! Thanks to HTO for working to keep the ocean and shore clean; it would be nice to know who is in the pictures, though! As for "derelict boats" not being allowed to be moored except via city moorage, what's one person's derelict is another's home or treasure. Isn't the right to moor one's boat outside of a marina protected by law?

Thank you to everyone involved! Will the boat owner be responsible to recover the cost of this endeavor?

Terrific photos. THANK YOU Harry Rabin and Hillary Hauser (Heal the Ocean), Brian Borgatello (MarBorg), Union Pacific Railroad and SandyLand homeowners -------- Thank you to one and all who worked so hard to make this clean up happen. (Give the dog a treat, too, please.) --------- Glad to hear Heal the Ocean is working to get the jump on future wrecks. Hooray for keeping our ocean clean.

While the threat didn't originate in the City, Harbor Patrol should have acted to save the boat. Perhaps they were too busy. AND where is the f'ing Coast Guard, there was a day they towed and saved boats as part of everyday work.

It is called "vessel assist" now.

Lawyers and liability worries at its best. Fire and police will also stand and watch a person drown instead of going in the water.

Am interested to learn how the owners of the beached boats are found and what is their responsibility both solution and financial when this happens?

There's a big chunk of that boat deck on the beach just East of the Carp Harbor Seal Sanctuary that's been there a few days. It must have broke off the wreck and washed ashore. It's accessible at low tide. I guess that puts it on State property.

where exactly was this? LPNF

AHLIA, thank you for the kind