The “Holy Grail” of abandoned homeless sites is being tackled Monday, August 30, 2021, in a cleanup being done by a team of homeless workers who have been enlisted by EARTHCOMB, the brainchild, and business of Andrew Velikanje.

The Holy Grail site, located at the end of So Kellogg Ave, in Goleta, is the second in HTO’s list of over 20 abandoned camps identified in a survey done by HTO Field Advisor Harry Rabin. The first site, in the So. Fairview area of Goleta, HTO paid Earthcomb to tackle, and Andrew cleaned it up himself, with the pile of bags picked up by MarBorg Industries the next day.

Inspecting the sites listed on Rabin’s survey, Andrew came to site “Number 6”, next to the Schwan Brothers Excavating Contractors yard on So. Kellogg, and called Hillary Hauser, Executive Director of Heal the Ocean, and said, “This is the Holy Grail!” – meaning it was mammoth and it was bad. Santa Barbara County Sheriff Ben Sandu was brought in to inspect and OK cleanout and Brian Borgatello of MarBorg Industries came in to size up the need for roll-offs/trash bins, and more manual labor. 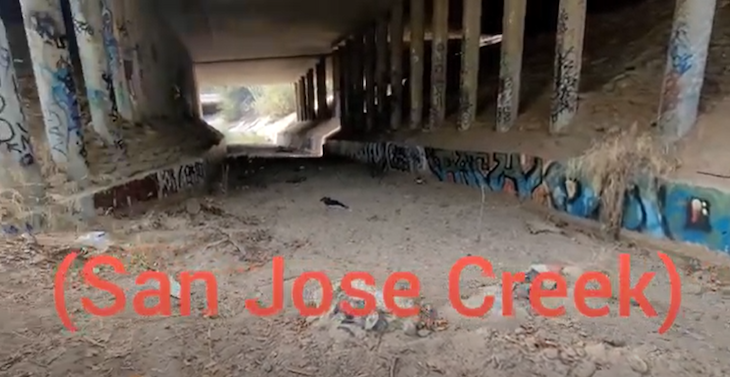 After the cleanup of San Jose Creek

The Schwan Brothers were so glad to see the cleanup coming, they have offered their own roll-off/trash bin, and even to pay for the hauling and dumping (Thank you, Jason, this represents considerable savings to HTO!). The Earthcomb workers will begin on the site today, with MarBorg workers arriving tomorrow, Tuesday, to gather up the rest.

“Look at this short video of the site these gentlemen are working on today,” said Hillary.  “No wonder Andrew (who took the video) called it the Holy Grail – it is giant, and is right smack on San Jose creek!”

Hauser says the work of Earthcomb might be the most significant work that could be done to remove ocean pollution sources from storm drains, creeks, or runoff to the ocean.

Earthcomb has cleaned up almost 9 tons of trash from the Rincon underpass, Rincon Bluffs, Carpinteria Bluffs, East Beach, Painted Cave, Highway 154, Lake Cachuma, and many other sites. See his “Vroom Vroom” videos that record this work on his Earthcomb website, where the motto is, “We’re cleaning up what you’re putting down.”

Andrew created the Earthcomb website – and did the work – singlehandedly while living in his car for six months. He is an illustration of one of the successful methods of “Functional Zero,” which is to get to know the homeless person by name and get to know his/her experience.

Sharon Byrne, Executive Director of Hands Across Montecito has formed a successful group that visits encampments with this in mind – and it is this group that pulled Andrew Velikanje indoors. Andrew now does outreach to other homeless people. Sheriff Ben Sandu does the same and has successfully found shelter for a number of people who had been living outdoors.

As for Andrew, he now has a home, with an office where he has set up a system to keep track of his work and his workers, for the benefit of us all.

Anyone interested in contributing snacks, water, etc. for the workers, please call the Heal the Ocean office for site location and/or to drop off items at the site or office. Call Alison at (805) 965-7570 for information or directions.

Way to go Andrew!!! Thanks for cleaning it up for the rest of us.

What an excellent program. I hope the entire community supports them with either volunteers or donations for this effort. We do not need government to keep the area cleaned up. Too much red tape for them. Let groups like HTO take charge and the homeless camps and the trash will disappear.

This is amazing, wonderful to see a SOLUTION. Andrew you are awesome :)

More good PR from HTO. This is what action looks like. Glad to see it. While the city continues hiring consultants and arguing about which parking lot to turn into a campsite, HTO is out in the field surveying and cleaning up trash.

But smart minds want to ask, why is our city and county not handling this?

It’s great for volunteers to step up but ultimately it’s a massive task that is being ignored by our municipalities, who are doing very little to prevent these camps and zero to clean them up.

My first thought also, Measure B the add on tax for TOT has focused needed infrastructure, but lags on maintaining, plus we have recently approved sales tax for such. For unincorporated areas the county should cough up a hairball. If not yet addressed, perhaps our self appointed Mayor Representative on the SBACG can throw them a bone.

Volunteerism is the cornerstone of any society. Why wait for the nanny state to do what we can do, outside of their red tape coated world? If you wait on the state, you'll wait forever and be ready to hear a litany of excuses why they can't or why it takes so long.
Great job by Andrew, Earthcomb and Heal The Ocean on this program, now to keep it going and with little government intervention.

There is no nice way to say this- Heal The Ocean is as much a environmental hypocrite as the Santa Barbara City Council.  HTC brags about cleaning up homeless areas, the "Holy Grail", as Hillary Hauser stated, yet they have never said or done anything about how the lack of proper street cleaning practices here are polluting the ocean from every type of pollutant flowing into the creeks and storm drains that ultimately wind up in the ocean:  Feces, oil, gas, fertilizer, pesticides, brake and tire particles, you name it!

Like it or not, The Santa Barbara City Council is responsible for the streets of our city being the biggest polluter in our city, including the homeless! The archaic street cleaning machine that they contract for brushes huge amounts of pollutants into the air, which fall back to the streets and are inhaled into people's lungs. Most of our city's streets and especially those in the foothills are not "cleaned" at all. Their pollutants flow downhill into the ocean and kill our sea life. The modern way and efficient way to clean streets is with a water spray truck running ahead of a vacuum truck that sucks everything up.

"Homeless job program" This has possibilities for positive results. A step in the right direction.

Another media report claimed the camp residents who signed up for the work crew never showed up; so it was just the leader and friend who had to carry on. This jobs program remains a work in progress, as they say. But clean-up is clean up, and deserves well-earned celebration.

BRAVO Andrew Velikanje! Just Do It.

I hope they will add the huge encampment along the tracks at the Las Positas underpass. And then the one up by the State St/154 exchange, right next to the Caltrans staging area. The panhandlers that stand in the offramp (southbound) of Las Positas are coming from the big encampment under there....and then they leave their mess at the panhandling spot. Why after numerous calls and complaint forms are Caltrans and the city allowing those guys to panhandle up and down the ramp and in between cars waiting there. Government/public agencies are an absolute FAIL so far. So glad other groups are finally stepping up in an organized fashion. Just do it.

Andrew, this is awesome man! Thank you! Andrew knows about the creek cleaups I've had to do in Tecolotito Creek & while they weren't as crazy as the 1's featured, it was still a mess.
The most recent cleanup wasn't too bad, but the 1 last year after a homeless dude who goes by the handle of "Survivor" left a HUGE mess in the creek entrance & some of that included hypodermic needles.
That mess was there for a long time, I just got fed up w/ it & decided to take matters into my own hands & the effort was worth it.
Now we have a cooperation between some of the local businesses & residents to clean up any mess before it gets out of control.
Andrew, Earthcomb, Heal The Ocean, Marborg, SBSO Deputy Sandu & all who have helped in these efforts, a huge thank you from us all!

Funny how all the people who

Your time is now.

@Zero, this is a local SB

I hear you Alex, I don’t

I’m not going to argue about

When did they resume staffing

I'm not talking about the

I feel that if this is the