By Heal the Ocean

Andrew Velikanje is Heal the Ocean’s Miracle Worker. In July 2021, we bumped into him cleaning up a homeless encampment at Haskells Beach out by the Bacara.

We then found out he had been cleaning up beaches, highways, lakefronts and every place else for a long time.  Andrew started an official business, Earthcomb “For a Cleaner California,” and  Earthcomb’s website lists how many pounds of trash have been removed from local areas such as East Beach, Rincon Beach, Montecito, etc. Collectively he has removed 112,600 pounds of litter. HTO has worked with Andrew, and his Earthcomb crew, and we have collaborated on major cleanups since then.

When Santa Barbara’s Old Spanish Days rolled around, HTO contacted the City’s Downtown Organization and volunteered Andrew and his crew – and only a few days after Fiesta and after lots of confetti and other offal, you couldn't find a spec of litter anywhere.

Andrew has some advice & observations:

Always the optimist, Andrew signed off his report to HTO with “Tons of gratitude, love and light from Earthcomb :-)” 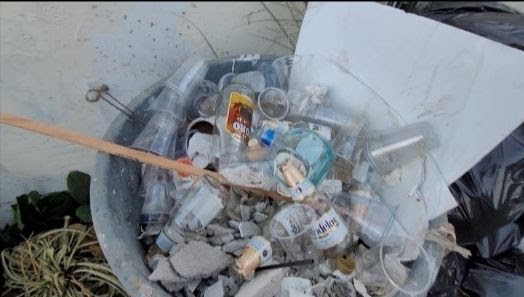 MEANWHILE, Eric Krueger of the Downtown Organization, who worked with Jasmin Tupy of HTO on the Fiesta storm drain covering plan, gave Jasmin the following debrief:

Last year (2021) Fiesta could not operate to its full capacity due to Covid-19 precautions, therefore this year’s (2022) trash output was much worse than the previous few years. Specifically, the Mercado in De La Guerra Plaza was hit hard due to all of the foot traffic to patronize food vendors. The take-out food was the origin of a large percentage of the waste due to the single-use of the plates, plastic cups, and plastic utensils. Due to this, most trash bins were packed to the max.

On the bright side, almost all cascarones (with a few exceptions) were filled with biodegradable confetti material instead of plastic or mylar.

Erik reported Earthcomb hard at work, and commented, “As always, Andrew and his team are killing it and the crew wearing HTO Shirts puts out a good message. Andrew, great job! HTO, great job!”

Reading this I kept thinking to myself way to go Andrew! Then Erik said exactly what I was thinking:
“As always, Andrew and his team are killing it and the crew wearing HTO Shirts puts out a good message. Andrew, great job! HTO, great job!”
mostly the killing it part, not so much the "Hancock movie references", but yeah, Thanks Andrew!

Good job guys. Can’t help but mention how much trouble Fiesta brings to SB - trash and traffic mostly. And I’ll say this, as a person with a lot of Spanish blood, watching a replay of the local news’TV coverage of the parade today (my son wanted to see it) I’m embarrassed at the commentary that’s happening. If I were a Native American I’d be pissed off big time hearing what they’re talking about. The Spanish, the friars, they did this they did that. Wow. Talk about a middle finger directed at the Native Americans. Zero acknowledgement of them.

It’s a giant Spanish party for taking over someone else’s lands.

"A Cross of Thorns" by Elias Castillo, Pulitzer Prize winning journalist and author describes the brutality of the Chumash by the soldiers and "religious" leaders. 62,000 Chumash lost their lives.
The Mission rose garden grows over a mass burial ground.

"Why do we recognize the land?
To recognize the land is an expression of gratitude and appreciation to those whose territory you reside on, and a way of honoring the Indigenous people who have been living and working on the land from time immemorial. It is important to understand the long standing history that has brought you to reside on the land, and to seek to understand your place within that history. Land acknowledgments do not exist in a past tense, or historical context: colonialism is a current ongoing process, and we need to build our mindfulness of our present participation. It is also worth noting that acknowledging the land is Indigenous protocol. "
---------Northwestern.edu/

New leaders are bringing compassion and respect to all living beings. One day, the Chumash will be rightfully acknowledged before SB events, at the site of Mission, etc...

It's about time that the City of Santa Barbara prohibit the use of single issue plastic plates and utensils at these public events.
“ The take-out food was the origin of a large percentage of the waste due to the single-use of the plates, plastic cups, and plastic utensils. Due to this, most trash bins were packed to the max.” Good that the confetti providers are getting the message.!