Two people were injured in a head-on vehicle collision on Highway 154 on Tuesday evening.

At 5:23 p.m., Santa Barbara County firefighters and a ground ambulance responded to the area just below W. Camino Cielo. They discovered two vehicles had collided with one patient in each car.

One person sustained critical injuries and the other sustained minor injuries. Both were treated at the scene and transported to Santa Barbara Cottage Hospital via ground ambulance.

A minor fire was extinguished from one vehicle following the collision but no extrication of the patients was required, said Fire Captian Daniel Bertucelli.

Highway 154 was closed for a short time as the vehicles were blocking both sides of the roadway. 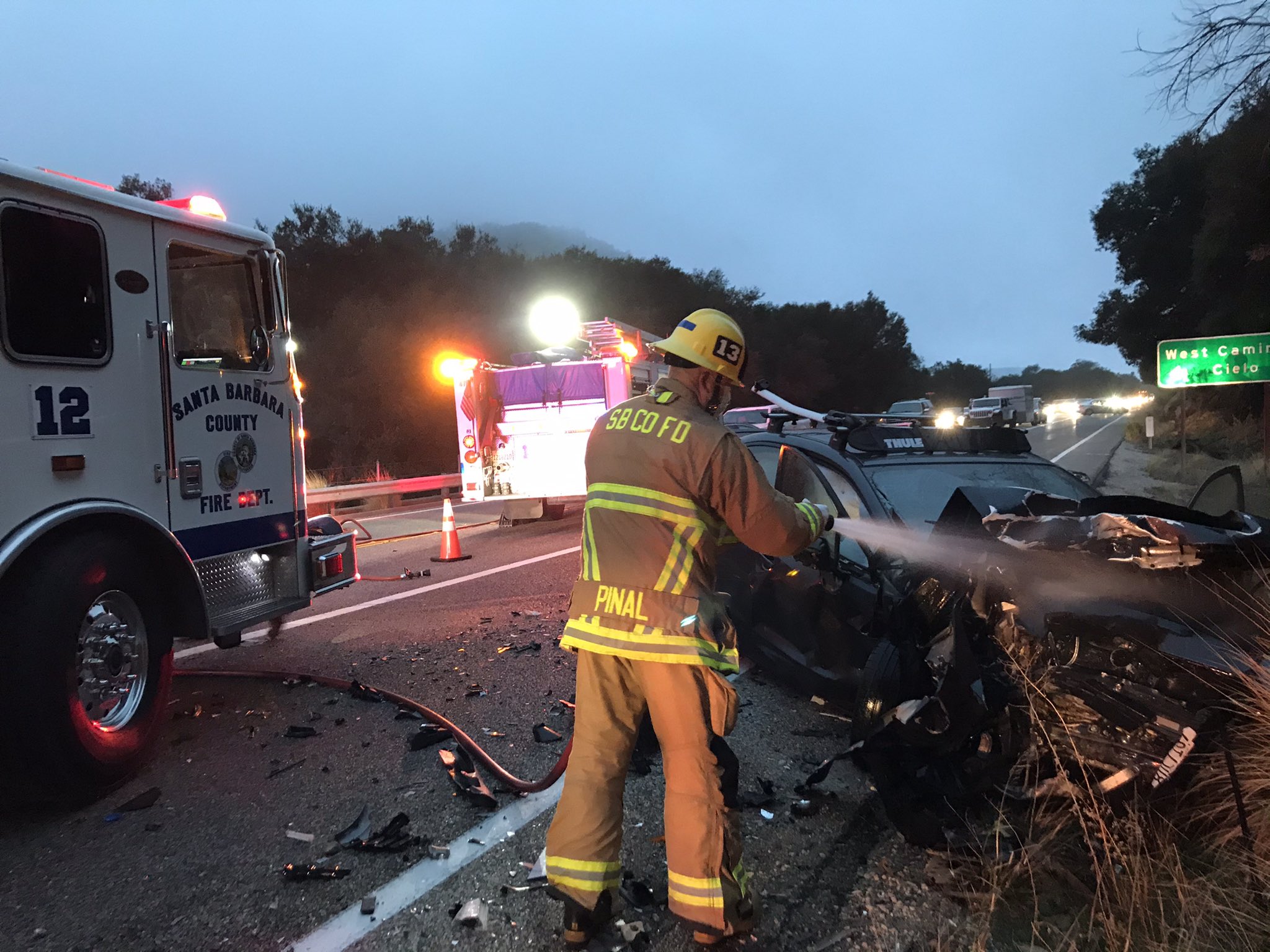 CHP, AMR, and county fire are responding to a reported head on traffic collision on Hwy 154 at W Camino Cielo. One person reportedly dead. Black sedan vs silver sedan. Patient in the silver sedan cannot get out of the vehicle, needing extrication.

CHP has it at West Camino Cielo. All lanes blocked.

Apparently there were NO FATALITIES.

Andrew. Correct, there was confusion among agencies based on an RPs initial report. SO and Fire double-checked the area and said there was not a fatality, just the one Red tag transported to Cottage and a Green tag being assessed now.

And it just goes on and on... over the past 25 years up here on the "Pass" from my experience.
Good to hear no fatalities, but senseless and avoidable.
Noticed actual CHP presence last 2-3 weeks, maybe someone's figured it out re: traffic enforcement and pulling people over. (it goes in cycles about doing anything at all)

Hard to believe you could come out of that crash with minor injuries. I guess they know what they are doing with the design of soft front end cars and air bags these days. I try to stay away from the pass, especially during commute hours.

It truly is amazing. Part of the reason it looks so bad, yet protects well, is due to that "soft" design. The crash energy is dissipated by all that crunching of material before it has a chance to dissipate upon the passengers.

Luckily was a Subaru and Hyundai and they bounced off of each other from the crumple zones....large truck would have likely been a different outcome.

I live within earshot of the 154. Since I've been living that close to it, I've realized how often accidents occur on that road. Now I never ever take it unless I absolutely have to.

Might be time to put in some low profile traffic separators in the median to prevent these head-ons.

not a bad idea.

I take this road daily to and from work. People are jerks and they don't know how to drive. I was right behind this accident and I can only assume someone was on their phone. People need to learn to slow down. There are a lot of big trucks/work trucks that drive very slow and people get impatient. Have I, yes, for sure. It can be a safe road if people respected the limit. But they need to take the trucks OFF this pass. It's terrible.

Oh yeah, blame trucks for the pisspoor decisions made by drivers who think rules don't apply to them ('coz, y'know, they're special). Always blame the other guy... it's the new American way.

Chill out 10:42AM ... She wasn't solely blaming truck drivers. Most semi trucks traveling along 154 don't have business ON 154, they're using it as a short cut. 101 is far more logical for a large semi truck, than a (mostly) one lane each way winding mountain pass. And for more reasons than just because they slow down/annoy commuters, it's just safer.

154 is not necessarily an unsafe road as a roads go. I've driven across our country several times. Roads just like 154 are everywhere. The problem is the CA drivers. Go take a safe road trip and see for yourself.

10:42: Please state where I blamed trucks for these decisions? Remember the truck that came barreling down the 154 and crashed into the apartments? I never blamed trucks.

It seems like a lot of people here are attributing all the accidents that occur on the 154 to poor driving practices. I think virtually any accident can be blamed on a driver’s actions one way or another. Blaming drivers is not going to make the 154 safer. Advocating for everyone to slow down and be more careful seems a lot like advocating for abstinence. It would work in theory, but we are all human. I think we need to investigate how to improve the road in order to make it safer, knowing that drivers will continue to be human.

Shutting down the casino would help, in part, to make a safer 154.

Wait, what??? Of course the accidents are human error! It’s not the road’s fault. Maybe we should just close it, tear out the asphalt, take out the guard rails and erase it from the map. That’ll work. Accident problem solved.

How has no one blamed the utter lack of law enforcement on the 154? Yeah, maybe a couple speed traps, but no one patrolling and stopping speeders or reckless and impatient passers. Put a couple cops on it, one on each side at least and have them stop the idiots from causing death and injury.

I've seen a few accidents and many near-misses attributed to shockingly stupid people attempting to illegally pass. Given the proximity to W. Camino Cielo and where the previous passing lane ends, I'm willing to bet that's what happened here. I wonder if signage about Illegal Passing/Speed Enforced by Radar/We've Got Cameras and Will Hunt You Down might help deter the idiocy.

I do like the “we’ve got cameras and will hunt you down” sign idea! And then they’d have to follow up by hunting down the offenders.

In Australia they have quite a few cameras set up that are spaced X number of kilometers apart...if you reach camera B too fast they send you a ticket. That being said there should be more speed traps and patrols on 154 (is it a bad time to acknowledge this would cost money and would yes entail a bit more funding for the police). Also tickets should be given to people going 40 mph as well as those going 70 mph.

DUKE - yeah, I saw that "fund the police" jab haha! This is EXACTLY what police should be used for. They should NOT be used for things like mental health emergencies, especially in minors. Pepper spraying a 9 year old, handcuffed and terrified little girl is the very reason I, and many liberals, say we need police reform.

We do need police reform! Let's start by making the police union quite a bit less strong, as like the teachers union they are a nuisance/problem that make it next to impossible to deal with problematic cops (or teachers!). The irony though is that it entails the exact opposite of "defunding"...we need MORE funding that can then be channeled towards additional training and the presence of more specialized individuals responding when/where appropriate.

What? Isn't that the same thing? Bad drivers/slowing down? I drive this daily and I can tell you that it is drivers who are on their phones, or speeding (along with drunk drivers from the casino).

@SBMom, don't forget all the drunk drivers from the dozens and dozens of wineries, tasting rooms, and breweries. I know a LOT of people who come up "tasting" for the entire day and head back home on the 154 thinking that their one meal or a couple of hours wait after getting hammered is enough. It is a joint effort by the casino AND the wineries.

There are next to no shoulders on that stretch of 154. You would have to light someone up, and virtually follow them for miles before there was a suitable place to pull them over. Not good "speed trap" territory.

You have aggressive drivers - some of who drive fast but competently - and the accidents are not caused by them. If you cause an accident such as a head on, your license should be history for at least two years. If you are involved and at-fault when on your phone, you should lose your license for at least one year. Period. No fines. No negotiations. I've seen fast drivers that are careful drivers. The folks causing accidents are usually driving with stupidity - like fast near the crest of SM Pass. Plain dumb and dangerous. I don't get in a twist about someone who drives quickly - maybe even over the limit - so long as it's done carefully. Those who want to hop into a vehicle and pay no attention to the driving should be off the road. Simple.

Drivers who cause accidents while using their phones should lose not only their license, but also their right to have a cell phone.

Feel sorry for the animals killed, and faster drivers would do more of that, right? Lost a couple of bears a few years ago by people trying to get to the casino.

I had presented the idea before, that
the 154-aka CH-HWY, since so named & all roads leading to..the casino, should be responsible for supplying kiosks, 2 on each side of the mtn..personed by 1 regular & 1 intern
officer with a patrol car & a motorcycle (stripped down for gnarleyness)..
Split the cost with the wineries, as someone mentioned..
I think folks would slow down.
It's affordable.

How does that keep someone from passing when they're not supposed to. Speed is not the prevailing cause of most of these accidents. Many, if not most, are due to someone trying to pass when it's not safe. A split second. That's all it takes. And, no kiosk, patrol car or stripped down gnarly motorcycle is going to prevent that. People need to learn how to drive on a road like this. It's that simple.

It appears that the City of

Doilies: Everyone has the

Grrrrr! damit and them. 2 so