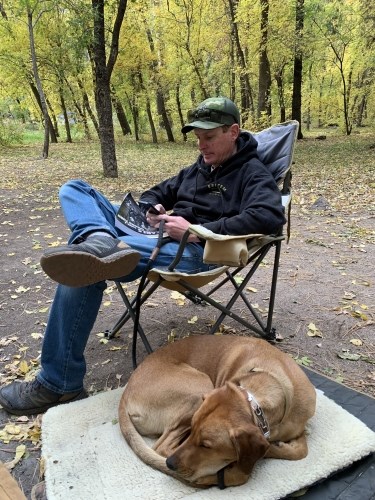 With profound sorrow, the family of Grahm Williams announce his passing. On 4/29/22 he died in his sleep from a previously unknown heart condition. Grahm was 41 and resided in Santa Ynez.

Born on July 2, 1980 in Denver, Colorado Grahm shared his birthday with his Grandpa Morris and cousin Iain Morris. He grew up skiing on the slopes of his hometown Leadville, Colorado. The family relocated to Fallon, Nevada where he graduated from Churchill County High School in 1999. He continued his education at Brooks University in Santa Barbara, California where he met the love of his life, Krista with whom he had one son, Jasper. August would have been their 21st anniversary. After graduation, he went to work for Santa Barbara County Parks Department as a ranger. He found a second home at Cachuma Lake where he spent his days surrounded by nature. He had just completed his 19th year with the department.

He loved nature and hiking and spent his free time at the beach or wandering in the country with his dog Satchmo. He was an artist, a photographer, an avid reader, loved to travel, tell stories, and cook. He could spend an entire day preparing one meal. Grahm also loved disc golf and cherished his time walking the course. He belonged to the Masons and for a time wrote the newsletter for Northern California.

His sense of humor and genuine ways endeared him to everyone. Loved by his family, friends, coworkers, and anyone he stopped to engage. He could make a friend anywhere. He was a master of noticing the subtle qualities of light. His presence will always be felt in those moments throughout the day where the details are illuminated.

He is survived by his wife Krista Williams, son Jasper Williams, mother Kathleen Williams-Miller, stepdad Joe Miller, Grandmother June Williams, father Steven Williams, step brother Alex, and numerous Aunts, Uncles, and cousins. A celebration of his life will be held at Lake Cachuma on May 22, 2022 from 2-4. All are welcome.

A reader wonders where the bicycle lane is on Carrillo Street at the Highway 101 underpass.

Can someone please explain how 10 year old kids are allowed to drive fully functional motorcycles on city streets and sidewalks?

Santa Barbara-based nonprofit, Equal Learning Fund, aims to create a world where education is available for all.

Pop-star and lead in the musical "Grease," Olivia Newton John, passed away at her home on Monday at the age of 73.