After conducting an independent water analysis, a Goleta woman is claiming local tap water is causing skin irritation with abnormally high levels of a chemical used to treat drinking water.

Caroline Bennet contacted edhat with a concern that her family had been suffering numerous skin issues (ranging from burns, itching, and eye-stinging) from Goleta tap water after recently moving from Santa Barbara. Several mothers in the area reached out to Bennet on Facebook stating their children were also getting rashes after bathing. One woman stated her scalp was so itchy she thought she had head lice. After hearing these similar complaints and with water filters failing to work, Bennet decided to have her tap water independently tested.

Bennet received a full report from KAR Laboratories, Inc., an environmental and analytical testing lab based in Michigan, and said the results were disconcerting. The Total Trihalomethanes (TTHM's) were reported to be 150 ug/L (micrograms per liter, also known as parts per billion). The Federal and California maximum allowable annual average level is 80 ug/L.

TTHM's are commonly found in municipal water supplies and are a combination of chloroform, bromoform, bromodichloromethane, and dibromochloromethane. They are colorless and odorless being formed when chlorine is used to disinfect water for drinking. They represent a group of chemicals called disinfection byproducts.

A charcoal filter is recommended to remove TTHM's from drinking water, but they are still categorized as Cancer Group B carcinogens which means they're shown to cause cancer in laboratory animals. Consuming water containing TTHMs in excess of 80 ug/L over many years may cause liver, kidney or central nervous system problems, although the health risk is generally considered low and tied to continued exposure over decades. U.S. EPA says it regulates disinfection byproducts such as TTHM "to address health risks posed by a potential association between chlorinated drinking water and cancer, particularly bladder cancer."

According to three studies posted on the National Center of Biotechnology Information, higher than normal levels TTHM's in drinking water may of pregnant women contribute to low birth weight and potential for birth defects.

Bennet stated she found research that TTHM's averaged 42 ug/L from a sample of 727 cities in the United States and 36 ug/L from 25 California cities. "Our water is currently worse than pool water," said Bennet after learning the average TTHM's found in 22 swimming pools averages 132 ug/L.

TTHM's gained national attention several years ago during the Flint, Michigan water crisis. According to Michigan Live, "Flint's highest running annual average of 99 parts per billion at one site was the highest of any of the violations in the state since 2010. Other averages among the violations ranged from 82 to 88."

The Goleta Water District's online report of Drinking Water Quality Tests from 2016 show the average TTHM's were 80 ug/L with a system average of 69 and a system range from 5.7 - 130.

"I called Goleta Water and they said it only matters if the average of the whole year (four quarter results averaged) are below the health limit. It does matter to me though, because I am showering in 150 ug/L right now, and it is extremely uncomfortable," said Bennet.

"As a comparison, other nearby water companies do not have such high levels of TTHM's. Lompoc, according to their water quality report, has a range of 6 to 29 throughout the year. I just received the results from Goleta water's own testing. The 3rd quarter numbers go up drastically for TTHMs, from 29 in the 2nd quarter to 100 in the third quarter at the Oak Grove sample location. Other locations go up from 8 to 77, and 18 to 88. Something bad has been going on and it shows up in the August testing," said Bennet.

Below is a graph created by her husband to show the average TTHM range according to a report from the Goleta Water District's 3rd quarter testing (this report is also provided below). 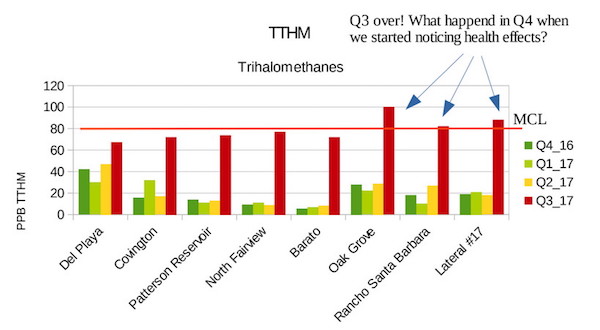 “We do use chlorination for disinfection. That is a very common way for both water districts across the state and country use to disinfect water," said KK Holland, policy analyst for Goleta Valley Water District, reports KEYT News.

Holland went on to say online water tests aren't reliable. “All of those water tests will state very clearly they’re only for informational purposes only. They’re not for use for regulatory compliance," she Holland. KAR Laboratories stated in their letter the report cannot be used for Safe Drinking Water Act regulatory compliance purposes because it does not comply with all of the U.S. EPA regulations, mainly in the area of sample collection. The complete letter and report are available below.

The water district stated to KEYT their records show the district's water quality is in compliance with all state and federal regulations.

Actually I had interaction

I will take a David Dorns

How many people woke up to