As a very young man, Joe Mickey liked surfing so much he started taking pictures of it. He had no idea where that would lead him, and it led him on some incredible journeys. 50 years later, he's still enjoying the adventure, led by his lens....

Thanks for sharing Joe. 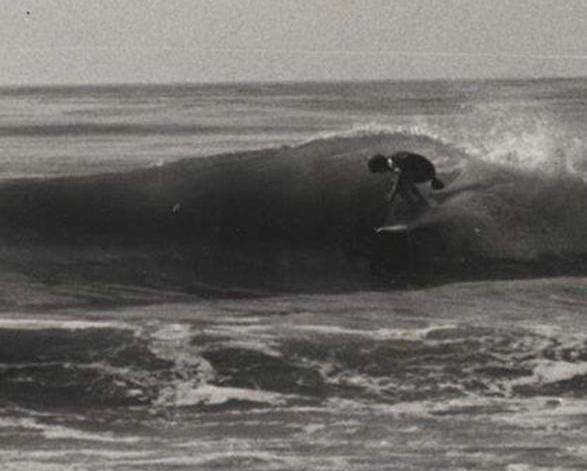 Long before Surfline, before the Internet, before cell phones and even computers, there were surfers in Goleta. It was a small and tight knit group. And they surfed the same spots we do today, with just a handful of buddies. Joe Mickey was one of these guys. But his love for surfing took him on quite a journey, through several careers and countless adventures. 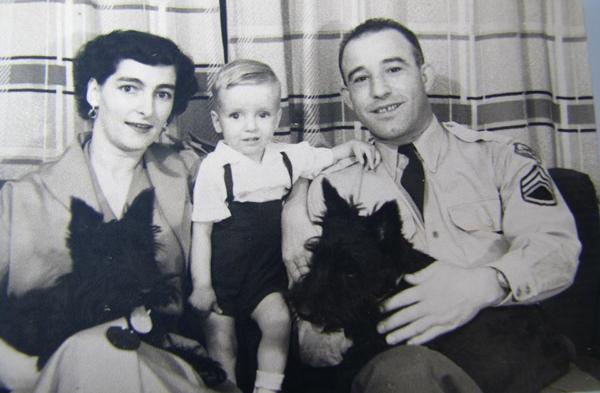 It all started when his parents decided to move to Santa Barbara. Joe’s dad was career military so they moved around. At one point they were stationed in Monterey and they liked it, so they went back when he retired. In the mid 1960s, Joe was 11 or 12 when they moved to Santa Barbara and rented a house near Earl Warren Showgrounds. 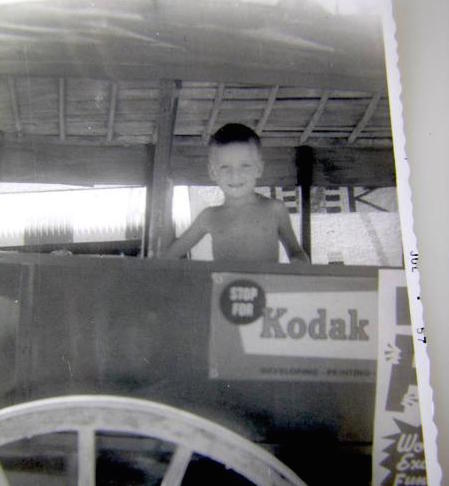 This photo was a premonition of Joe’s lifelong connection to photography. Joe had just one “no wetsuit” experience in Monterey, but he was pretty hooked on the idea of surfing. His uncle gave him an old, no name board and he was on his way. His parents thought Ledbetter and the harbor were good places to drop Joe off while they worked in the summer. So, they would drop him off around 7 a.m. and pick him up after work around 6 p.m. 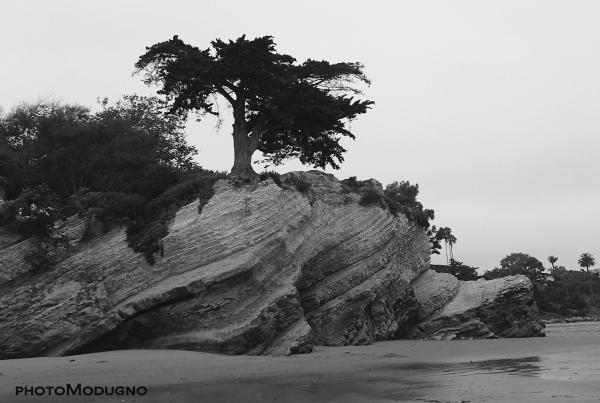 Young Joe met a guy named Lurch who said he lived in a cave along the cliffs at Ledbetter (how classic is that?). He gave Joe surfing tips in exchange for some of his 25 cent nachos from the snack shack nearby. Soon Joe got a paper route with the Santa Barbara News Press and Stu Fredricks helped him work his way into his first new board, a 9’ Yater spoon.

Fredricks was the manager of the Yater shop that was all boards and surf wax and nothing else at that time. He was very patient with a skinny kid who wandered in almost daily off the beach to look at the boards. He told Joe about other spots like Rincon and Hammonds and about ways to apply paraffin wax. 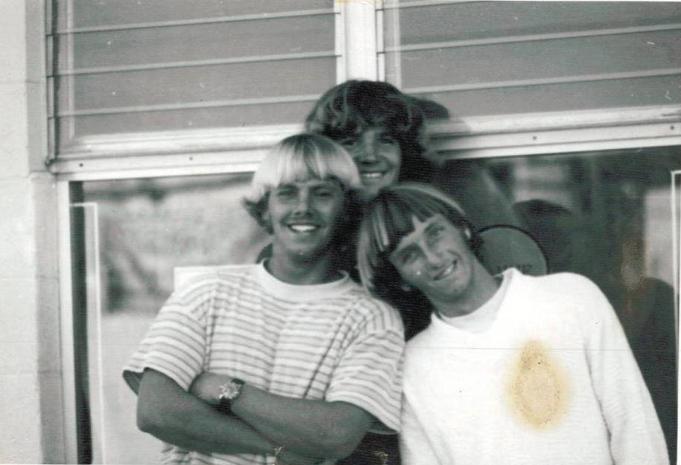 This crew with classic surf haircuts are John Magazino (left), one of the great surf talents from Goleta Rolland Yarnell (center) and Joe Mickey (right).

Joe surfed alone for his first couple of years. After learning at Ledbetter, he moved to Sandbar and then College, (today called Campus Point). Mickey says he never noticed any localization in the early days, it was all about fun… probably because there were so few guys surfing back then. Some more of Joe’s early surf buddies were Mark Mosby and Davey Smith. 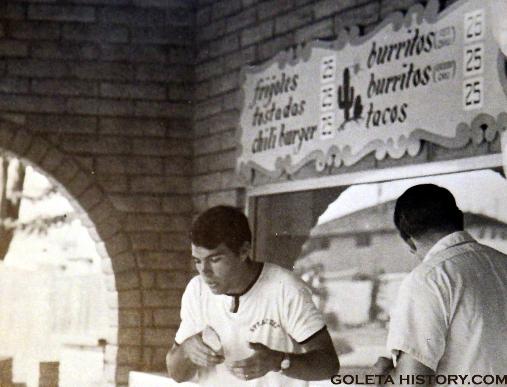 Surf racks on the car sort of gave away who the surfers were and they were drawn together by their shared love of surfing, and to share the cost of gas. A quarter got you a gallon of gas and another quarter could get you anything on the menu at Taco Bell, so if you had about 4 quarters each you could get waves and dinner after school! 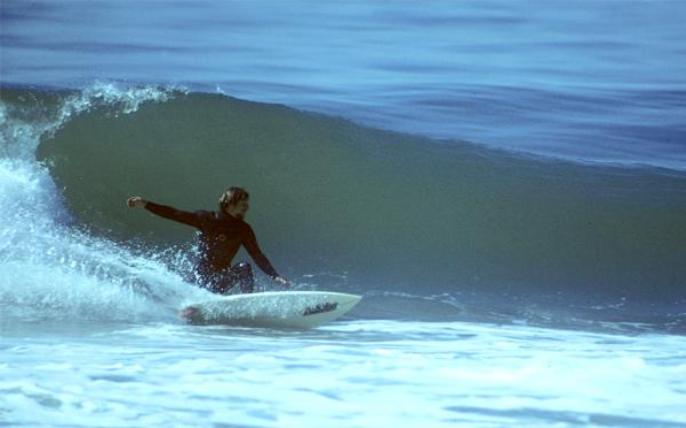 One of Joe’s first surf buddies he met at school was David Natal. Natal was on yearbook or the San Marcos school paper, which gave him access to a darkroom and through that, Joe got his intro to photography. 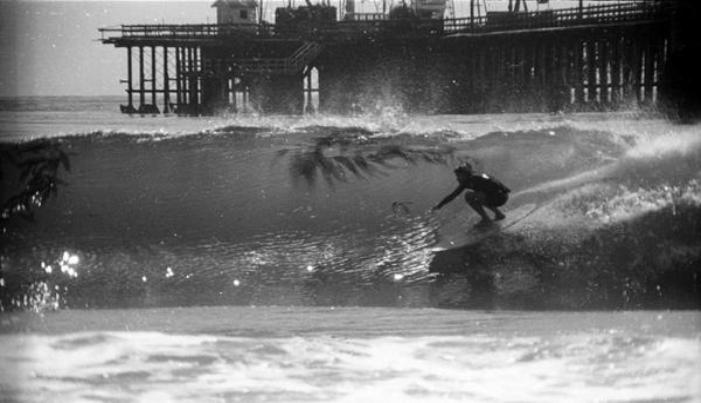 Mickey started shooting with anything that took a picture. Water shots with a plastic bag over a brownie or taping binoculars to the front of a brownie for a telephoto effect! But the main thing then was to surf and to get shots of his buddies surfing. Like this classic shot of Norman Graziano at the old Haskells pier… 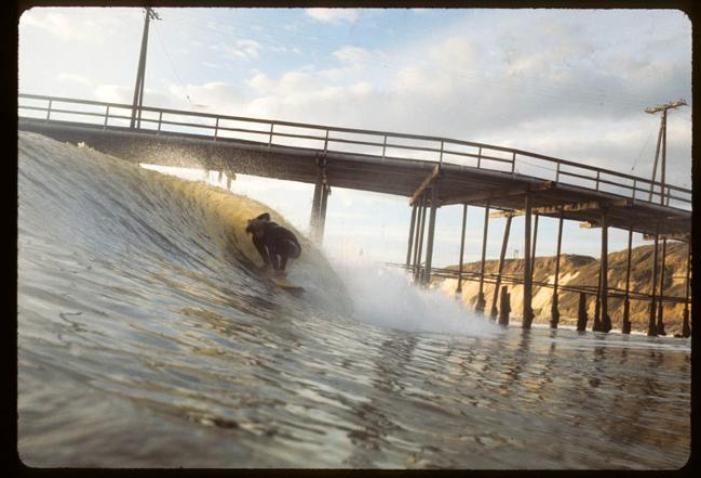 Joe getting barreled at the rickety old Haskells pier.

Sands was the go to spot for windswells and College Point and it’s cove were a much less crowded option than Rincon or Hammonds. Joe and friends often surfed Naples alone and they got plenty of days at the Ranch alone.

Joe got into the ranch before it was for sale because a friend’s father was handling the early real estate. He and his crew surfed the ranch before all the boats and the ranchette owners. They caught rare moments at the Goleta Slough and also crispy little windswells at More Mesa. They surfed Haskells a lot. Lots of good days, memories and empty waves. 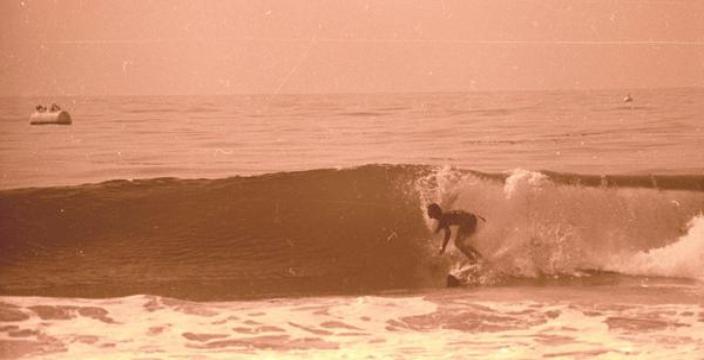 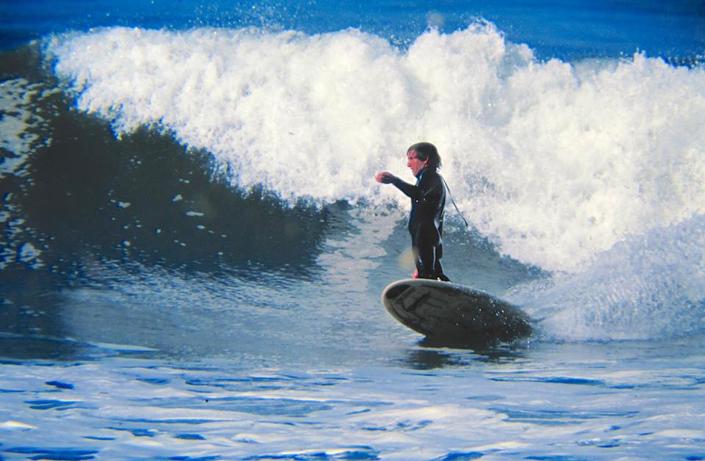 Joe Mickey at Oxnard Shores on a 6’ Stubbie.

Joe got good enough to land a spot surfing for Nuuhiwa Surfboards and even managed to go surfing with the legend himself once in Newport. He also remembers the day he surfed Little Drakes with George Greenough, who was mat surfing.

Joe remembers Greenough was very serious. “This was after he had made “Innermost Limits of Pure Fun” and all he talked about was the superiority of a mat over a surfboard… ‘you could travel with it easier, you could sleep on it’…very serious guy.”

It would do the county/state