The Santa Barbara Zoo’s Masai giraffe Audrey has given birth to a female calf, and the two are currently bonding, off view to the public, in the Giraffe Barn. The calf was born on Wednesday, March 14 at around 3 p.m. and is 6 feet, 1 inch tall and weighs approximately 180 pounds. The calf will be named as part of a contest sponsored by the Zoo and KEYT News Channel 3 (see below).

“This was the fastest birth Audrey has had,” said Michele Green, Curator of Mammals. “It was smooth and progressed well, and the calf stood up and was nursing in only two hours. Audrey is calm and this calf appears to be figuring things out very quickly. We couldn’t be happier for mom and baby.”

The calf had its first medical exam yesterday (3/15/18), where its height, weight, and general health was assessed by veterinarian Dr. Diana Boon, who is caring for the Zoo’s animals while the Zoo’s Director of Animal Health and Care is on sabbatical.

“We’re happy to report back that the calf is a strong and healthy female,” said Dr. Boon. “Audrey is an experienced mother and is taking great care of her.”

Animal care staff will determine when the calf will leave the Giraffe Barn, weather conditions permitting. Until that time, Audrey and the newborn calf are not on view to the public or available to media. 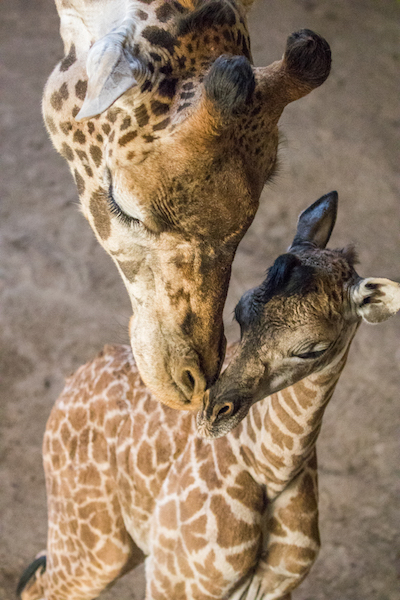 The calf’s name will be selected by popular vote by the public in a contest co-sponsored by the Zoo and KEYT NewsChannel 3. Four names have been selected by Zoo giraffe keepers and supporters – the one receiving the most votes will be announced live on KEYT on a date to be determined. Voting opens on today, March 16 at www.sbzoo.org and www.keyt.com. The names are Amirah, Makena, Nugget, and Quintin.

The public also can help the Zoo welcome this long-necked arrival by becoming a Foster Feeder sponsor of the giraffe calf. A donation of $50 helps with the cost of feeding the growing giraffe family. New giraffe Foster Feeders receive a baby photo of the calf along with a certificate, giraffe fact sheet, and recognition on the Zoo’s Foster  Feeder board. For information, visit www.sbzoo.org.

Audrey arrived in Santa Barbara in March 2010, from the Los Angeles Zoo. She was born on February 6, 2008 at the Los Angeles Zoo. Michael, the calf’s sire, arrived from Parc Safari in Quebec, Canada, in January 2012. He is considered the most genetically valuable male Masai giraffe in captivity, because he has few relatives in zoos other than his offspring born here at the Zoo. Michael’s genetics help the diversity of the North American Masai population. Joining Michael and Audrey in the Zoo’s herd is Parker, a male calf born in August 2016 to former resident Betty Lou (she recently relocated to the Fresno Chaffee Zoo); and Adia, a three-year-old female from the Cleveland Zoo who was introduced to the herd in December 2017 as a potential mate for Michael.

The Zoo’s giraffe herd among more than 120 Masai giraffes that live at 28 North American zoos accredited by the Association of Zoos and Aquariums (AZA). There are an estimated 37,000 Masai giraffes in Kenya and Tanzania, but a more thorough census is required. They are at risk due to poaching and habitat loss and degradation. Giraffes are the tallest land mammal, and the Masai is the largest subspecies, growing up to 17 feet tall and weighing 2,700 pounds.

Apparently these were never "white" rhinos, but rather a poor translation of their having a "wide" front jaw. Considering the current state of plunder going on in these native animal habitats, zoo preservation is something to celebrate rather than denigrate. I recommend a visit to the Santa Barbara Zoo to see how zoological gardens are done right.

What's sad is that in some instances, animals in zoos are becoming the last of their species. (Well, that and life in cubes under florescent lighting for most of one's adult, daytime hours. <G>)

How sad this gorgeous animal has to be locked up for its entire life. How heartbreaking when they sell this animal to another zoo. I feel the same way about people who keep indoor pets for their own perverse sense of control over a helpless animal. Please don't give me the old, "My <animal> LOVES me so much and loves being captive......" Sorry - animals are meant to live free (no inside all day all of the time and everything).

Welcome to a lifetime of incarceration, scrutiny and unnatural habitat.

All zoo animals are born in captivity today. Several generations of them now. To put them into the wild, would be sudden death. Zoo accreditation is remarkable today and the proof of their success is validated with every live birth. Protection from poachers, who still maraud their former native habitats, is one more benefit zoos provide..

Welcome to the world little girl.

This from a Noozhawk article

Marc Benioff has said, "The

Over 10,000 Pounds of Trash Collected in Goleta during Coastal Clean Up

Measure T is Not As it Seems

Measure T is Not As it Seems