As of 5:00 p.m., Incident Command is reporting the Real Fire is still around 420 acres with 50% containment.

The evacuations have been lifted for El Capitan Canyon and Ocean Mesa RV Park. There are currently 155 firefighters assigned to the fire and full containment is anticipated on Monday.

The Real Fire is estimated to be 420 acres with 20% containment. Santa Barbara County fire officials state the containment percentage is expected to increase today, but critical fire weather is expected this evening.

There are 105 firefighters on the scene today reinforcing the line and mopping up.

The Real Fire has reached 443 acres with 20% containment.

There are 250 firefighters on scene to be reinforced with 200 firefighters for tomorrow's day shift. All evacuations have been lifted except for El Capitan Canyon. No structures have been damaged and there are no injuries.

Residents between Dos Pueblos and Winchester Canyons are under an evacuation warning as a fast-moving fire heads towards the El Capitan Campground.

The fire will approach the state beach shortly and is "rapidly unfolding" as crews attack it from the ground and air, said Santa Barbara County Fire Captain Daniel Bertucelli.

Referred to as the "Real Incident," the fire is currently estimated at 50 acres and is actively burning in the canyon area. It's 0% contained and the cause is under investigation.

As of 7:15 p.m., Highway 101 southbound lanes have reopened and the number one northbound lane has reopened, according to CHP. Amtrak has also reopened the railroad lines.

Residents living between Dos Pueblos Canyon to Winchester Canyon are under an Evacuation Warning. While it is just a warning at this time, authorities urge that now is the time to be prepared in case you do need to evacuate. Stay aware as conditions can change quickly.

Fire crews will be on scene all night long and into the morning. 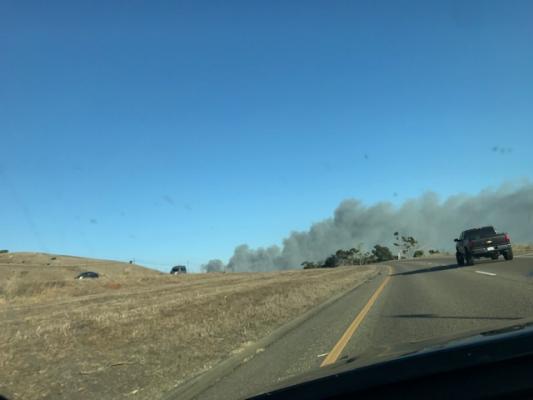 Santa Barbara County firefighters and air tankers are responding to a fast-moving, wind-driven fire near the El Capitan Campground.

Offshore winds are posing a threat currently gusting between 30-45 mph in the area.

Crews responded to the call at 4:32 p.m. Thursday and issued a 2nd Alarm. The nearby campground is being evacuated.

The fire is in the 12000 block of Calle Real on the Gaviota Coast burning east of the El Capitan Campground.

Was it started by the power lines? Probably not.

Northbound side acco0rding to the CHP Website is says it is pretty large not hearing alot on my pos digital.

I think the campground and the resort. They said fire is blowing southeast which means toward the ocean for the most part i think.

Going to evacuate properties on the east side which would be the El Cap Ranch homes and the Zacara horse ranch.

I got it on the SBSO Channel they are evacuating the camp ground scanner is breaking up if anyone else wants to report on this fire feel free to do so.

Sorry, but Ed and several others don't like me posting.

I like it when you post as well Tagdes, ignore the haters and do what you do,

I have no idea how it was started at this time.

I heard that and did not believe it @Katie...Thanks for the Help..

Alot of response going to El Cap it must be a big fire.

Units flying past me on Milpas headed up there to assist.

Spoke to an employee out at el cap ranch says the wind is blowing hard but towards the ocean. there is quite a bit a fuel back there to burn though

They say there is a ton of people still there to evacuate but only requesting one more unit to assist evacuating in that area Calle Real Side.

They should just work the flanks and let it burn to the beach...

I was picking up my car near the airport and saw the big plume west of Goleta. With winds expected to pick up, this could be a rough go of it. Good luck all firefighter, and keep safe.

VC Scanner says the 101 is being shut down in both directions north of El Cap. I saw almost a dozen emergency vehicles whizzing by on NB 101 on my way home from work. This could be really bad with all the wind forecasted this weekend.

@VCscanner
17m17 minutes ago
More
Santa Barbara County: The 101 is being shut down in both directions north of Goleta due to a fast moving brush fire. Adjust your travel plans accordingly. #RealFire

Amtrak is holding in Santa Barbara fire reported to be too close for their comfort..per Amtrak Dispatch.

CHP reports residents of El Capitan Road are being evacuated.

Fire has also reached the center divider of Hwy 101, according to CHP.

Las varas evacuated, dos pueblos in process but couldnt get thru locked gate

Am I the only one that would like a live news team covering this ?
Guess Keyt, will be on at 11 :00...
This is serious stuff..
Thank goodness for Edhat !

KEYT is generally not much help as far as updates on any fire, anywhere, from my experience. They tend to keep to their normal programming more than any station that I’ve ever known. That often leaves affected people in the dark about what is going on around them... sadly. Having been in the path of several major fires in Santa Barbara... it always amazed me how they keep to their schedule, ‘at the expense’ of their viewers.

Watched from up on Refugio Rd,, fire laying down at 7:15. Couldn't see down into El Cap Ranch area, but much less smoke. Fine air show late afternoon: 4 S-2s, BAE 246, DC-10 made five passes supporting the west flank, CH-47 spent a couple of hours in direct attack, County copter too. No freeway traffic yet, but smoke is way down. Great response. Hope the logistics crew gets some dinner up to the firefighters.

Due to changing conditions of the El Capitan fire, the evacuation warning has been LIFTED for residents BETWEEN DOS PUEBLOS CANYON and WINCHESTER CANYON. As always, please remain prepared as conditions may change at any time.
The City is monitoring the situation and will provide updates as they pertain to Goleta. Follow the Santa Barbara County Fire Department on Twitter for the latest news.
Please make sure you are signed up for aware and prepare emergency notifications. Go to www.readysbc.org.

Suggestion to all; get a basic scanner, cut out the middleman and uninformed speculation. Uniden is my recommendation. It does take some concentration and effort, and is not for everyone, but is great when big things happen.

Meanwhile, in other news... due to the 101 closure, traffic was bumper to bumper on the 154. People coming home unable to cross at Old San Marcos/Painted Cave. Traffic on OSM backed for for several miles including TWO semi trucks which are now jack-knifed on the hair pins. Have been there for nearly two hours.

Last update was 9:40 Thursday night. Are we to assume that the fire is completely out? Nothing on KEYT's site either.

The Fire Department just released a current update, see above.