From the Fire into the Surf: How Montecito Mud Winds up at Goleta Beach

A whiff of charred wood comes off the black mud that is being dumped daily into the ocean at Goleta Beach Park, part of the herculean cleanup that is underway in Montecito in the wake of the Jan. 9 debris flow.

It’s mud that came down from the Thomas Fire burn area in the mountains behind Montecito, and, according to Seth Shank, a senior environmental planner with county Flood Control, it will look like beach sand within 24 hours.

“Beach nourishment, that’s what we call it,” he said, noting that there is now a strip of sand at high tide where there had been none in recent years. “You can smell the fire, but it’s really beach-compatible – coarse-grained and sandy without a lot of clay.”

The beach may be coming back, but the water’s been unhealthy since Jan. 9. Swimming and surfing are off-limits at Goleta Beach, Arroyo Burro Beach, Carpinteria State Beach, El Capitan State Beach, Hope Ranch Beach, Leadbetter Beach, Summerland Beach and Hammond’s Beach because of high levels of bacteria in the water, county Public Health officials said Wednesday. The county is conducting weekly ocean water sampling along the coast.

The Jan. 9 debris flow itself, a catastrophic event, likely dumped millions of cubic yards of mud, trees, rocks and pieces of homes and cars into the ocean, Shank said.

East of Montecito, the sand and silt that poured into the Carpinteria Salt Marsh Reserve from Franklin and Santa Monica creeks on Jan. 9 is being dredged out and dumped into the ocean at Ash Avenue – more than 14,000 cubic yards to date. “Out of an abundance of caution,” a Public Health press release said, the public is barred from walking within 400 feet of the dumping zone there and at Goleta Beach.

This week, Shank said, the county began taking random samples of mud from dump trucks at Goleta Beach and Ash Avenue. The samples are sent to a lab in Santa Maria to be tested for toxins, including heavy metals, gasoline and polychlorinated biphenyls, or hazardous chemicals that were formerly used in electrical transformers. Testing will be performed at both locations at least once a week as the cleanup continues, Shank said.

Tests of mud samples taken in Montecito on Jan. 13 and 14 by a consulting firm for the county detected levels of two substances – fecal bacteria from untreated sewage and chemicals found in gasoline and motor oil – that could pose a health risk to cleanup workers. Workers have been advised to wear rubber boots and nitrile gloves and wash their hands often.

All dump trucks carrying mud and debris from Montecito must travel first to the Ventura County Fairgrounds, where their loads are sorted into piles of mud, rocks, metal and woody debris. 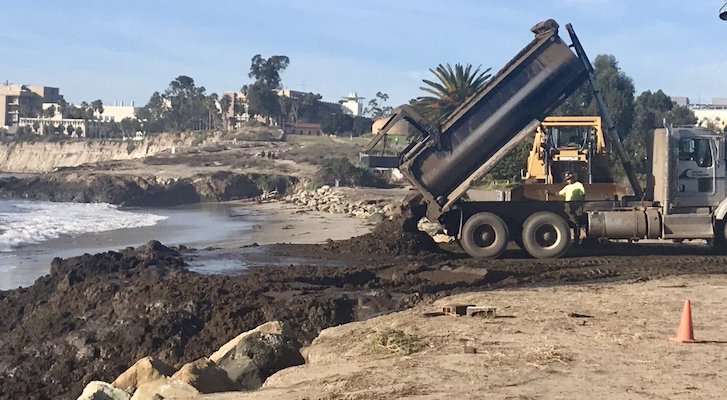 At Goleta Beach, Shank said, truckloads of mud containing too much trash are turned away. After a load is dumped, bulldozers spread it out on a portion of beach near the upper parking lots. County workers pick out pieces of scorched trees and other debris and throw them into a dumpster. Occasionally, they have found personal effects, Shank said – photographs, notebooks, even a china plate, which are saved in hopes of locating the owners.

As the cleanup proceeds, county officials said, Montecito roads and culverts are expected to be largely cleared by Jan. 31. Some repairs will take longer, including restoration of the arched bridge at Ashley Road and Highway 192, where the mudflow left a mark 12 feet high on the surrounding trees. (For a dramatic before-and-after view of the bridge, see the drone videos on the county’s Facebook page.)

The creeks below the Thomas Fire burn area have been cleared so that water can flow down them, said Tom Fayram, deputy director of county Public Works. But masses of rock and mud that were scooped out and dumped along the banks must still be removed, and that’s potentially a job for the U.S. Army Corps of Engineers, he said.

It will take at least another month, Fayram said, for the Corps to clean out the 11 debris basins that act as safety checks on the creeks below the Thomas Fire burn area. The debris basin on Montecito Creek has been cleared out, and the basin on San Ysidro Creek has been half emptied. But overall, only 40,000 cubic yards of mud, rocks and dead trees, or 10 percent of the 400,000 cubic yards that were caught in the 11 basins on Jan. 9, has been removed, Fayram said.

Fully one-third of the debris that was trapped in these basins lies in the Santa Monica Creek basin above Carpinteria, Fayram said. That basin, he said, “absolutely” prevented major damage to the city on Jan. 9.

In the San Ysidro Creek basin above Montecito, Fayram said, the rocks were piled up 30 to 40 feet above the rim. Boulders as big as 16 feet in diameter have to be broken up so that the pieces can be lifted out.

“It’s indescribable what happened out there,” Fayram said. “Every shovelful comes from the storm.”