On July 4, 2021, around 9:20pm, multiple Santa Barbara Police Officers, Fire Department, and AMR Paramedic units responded to the 2300 block of Cliff Drive for a report of serious injury traffic collision involving a single motor vehicle that collided with a tree.

Witnesses informed Officers that a black Ford Mustang was traveling at a high rate of speed east on Cliff Drive when it appeared the driver of the vehicle lost control while navigating the windy road and collided with a large tree on the ocean side of Cliff Drive. There were three passengers inside the vehicle at the time of the collision as well.

Neighbors in the area heard the collision and ran out to render aid to the occupants that all appeared to have serious injuries. The Santa Barbara Police Critical Accident Team responded to investigate this collision due to the serious injuries sustained by all involved.

Fire Department personnel needed to use special equipment to extricate the occupants. All four occupants of the vehicle were transported to Cottage Hospital for medical treatment.

The driver of the vehicle was identified as Marlon Anibal Valle Mejia, 23-year-old Santa Barbara resident. Mejia is suspected of being under the influence at the time of the collision and was administratively placed under arrest while he undergoes further medical treatment. This case is still under investigation. 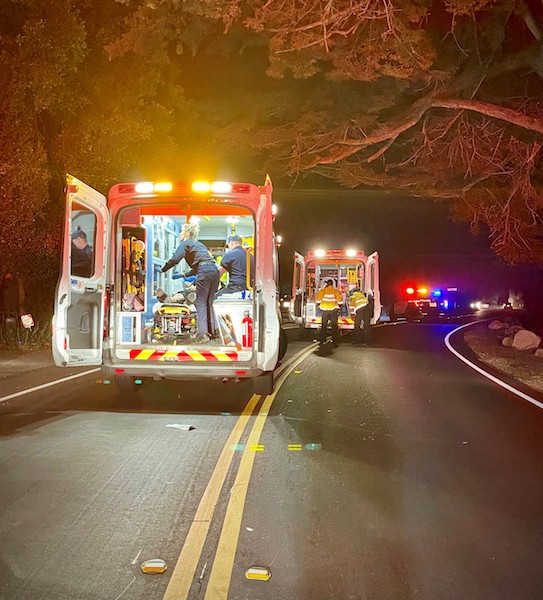 Vehicle vs. tree in the 3200 block of Cliff Drive.

Will he be charged with a felony for destroying the tree?

Nope but he will be charged with a felony DUI because of the injuries to himself and his passengers.

EL BARBARENO - if the destruction of the tree was intentional and resulted in over $10,000 in damage, then yeah, he will be. Why the concern?

I wonder if this is the guy who honked his horn at us on the Westside because we were *gasp* going the speed limit up Valerio street over the speed bumps. Timing is right, though I didn't notice the make and model of the car at the time.

An old friend that worked with me at Sears back in 1982 Leo used to take me through Hope Ranch curves at high speeds in his Audi though we were sober..

The report says the driver lost control navigating the windy road. Windy like lots of blowing wind? Or windy like winding? The road is straight for several blocks there. And I don’t recall heavy winds that night.

There's a typo in the report. This happened in the 3300 block.

Guess I won't be seeing that car again for awhile if ever...

Engine 76 enroute to Cottage for Manpower..

This is near the entrance to Hope Ranch...

Another engine responding to this accident.

2 males reportedly in a older

Suspects fled in a Toyota

Got it as well

I got it today and I replied

I got two of them a month or

got one today and one or two

Chip - Except none of these

We’re talking about SB9 and