By Tyler Hayden of the Independent

Dodge ― who until last spring operated Dodge City Shooters Supply alongside his father, Rick ― was pulled over after peeling out in his 770-horsepower Dodge Challenger Hellcat on Camino Del Sur in Isla Vista.

As deputies spoke to Dodge, they spotted a handgun magazine in the driver’s side door. A search of the car turned up 22 handguns, shotguns, and what officials described as “AR-15 style rifles.” Deputies also seized 97 grams of methamphetamine from the trunk.

Back at Dodge’s house on Vega Drive in Goleta, detectives uncovered 70 more firearms and another 33 grams of meth. 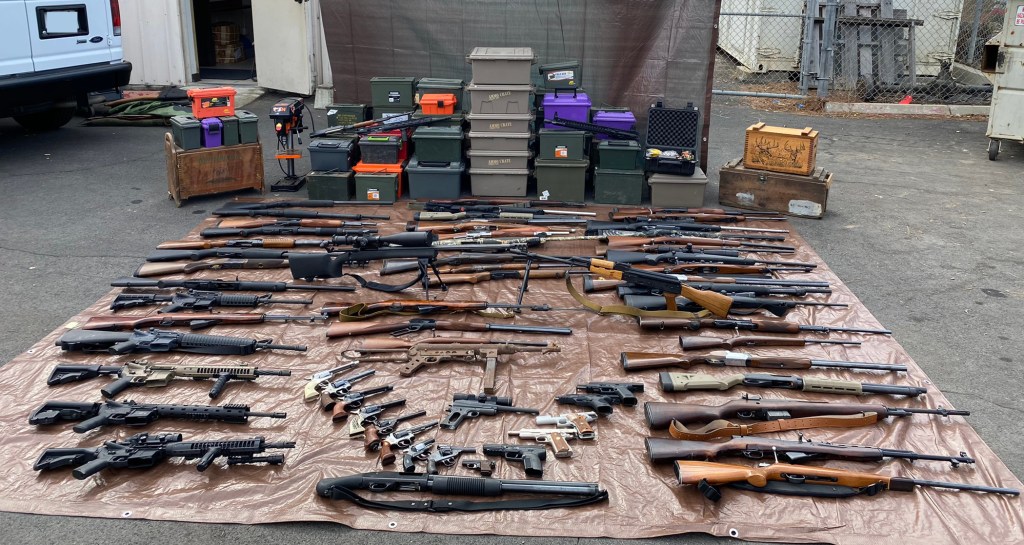 While many of the weapons appear to have been lawfully purchased and owned by Dodge, a number were illegally modified. Detectives found four customized rifles, two short-barreled shotguns, multiple factory firearms with filed-off serial numbers, and illegal attachments, including a silencer, large capacity magazine, and sniper scope.

But perhaps most troubling to authorities was the discovery in Dodge’s house of four home-built “ghost guns” ― unregistered firearms that are almost impossible to trace and therefore favored by criminals. They lay near a drill press and box of parts dusted with metal shavings.

These particular guns, all four of them pistols, were made from components sold by Polymer80, a Nevada-based company that offers “gun assembly kits” that come with 80 percent of the firearm. Owners then buy the other 20 percent separately and are responsible for putting the pieces together ― as well as serializing and registering the gun.

Sometimes, they don’t. The weapons then become convenient black market purchases for people who couldn’t pass a background check.

Dodge has been in jail since his December 5 arrest. His bail is set at $500,000, but his lawyer, longtime Santa Barbara defender Robert Sanger, filed a motion this week to have the amount reduced.

Senior Deputy District Attorney Kevin Weichbrod countered in his own filing to Judge Brian Hill that Dodge’s alleged crimes go far beyond his own “disturbing conduct” as “it appears clear that the defendant was facilitating and likely profiting from the criminal conduct of multiple other offenders.”

Weichbrod specifically pointed to the recent arrests of John Carothers in Lompoc on December 17, Jared Harwin in Isla Vista on December 18, and Curt Carpenter in Santa Barbara on January 19. In all three cases, the men were in possession of Polymer80 handguns, copious amounts of methamphetamine, scales, and baggies.

Carothers has previous felony convictions for selling drugs near a school and evading police, and he is not permitted to own a gun.

Harwin, a known Isla Vista drug dealer, was out on bail from an earlier arrest. He was a passenger in Dodge’s car when Dodge was taken into custody.

Carpenter has a lengthy and violent rap sheet and was apprehended during a robbery in progress at an upper State Street motel. It was his second arrest in 48 hours, after he was caught trying to burglarize a Nopalitos Way business. He was wearing a skull mask and carrying a cattle prod-style taser at the time.

“The cases illustrated above are not merely circumstantial in that they all possessed the same type of manufactured firearm without serial numbers, but they each have direct ties to the defendant in this case,” said Weichbrod. 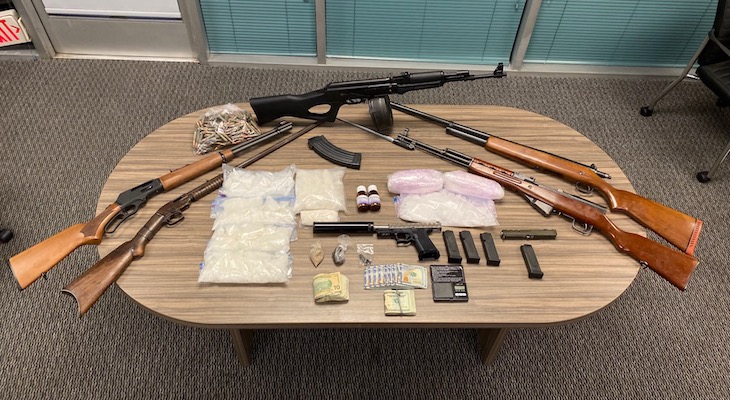 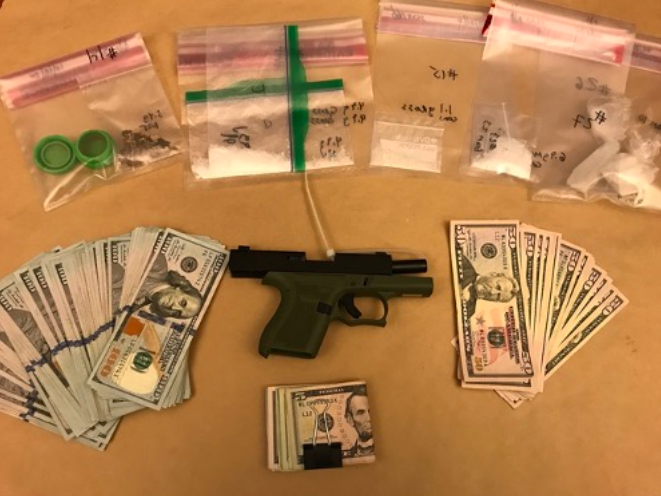 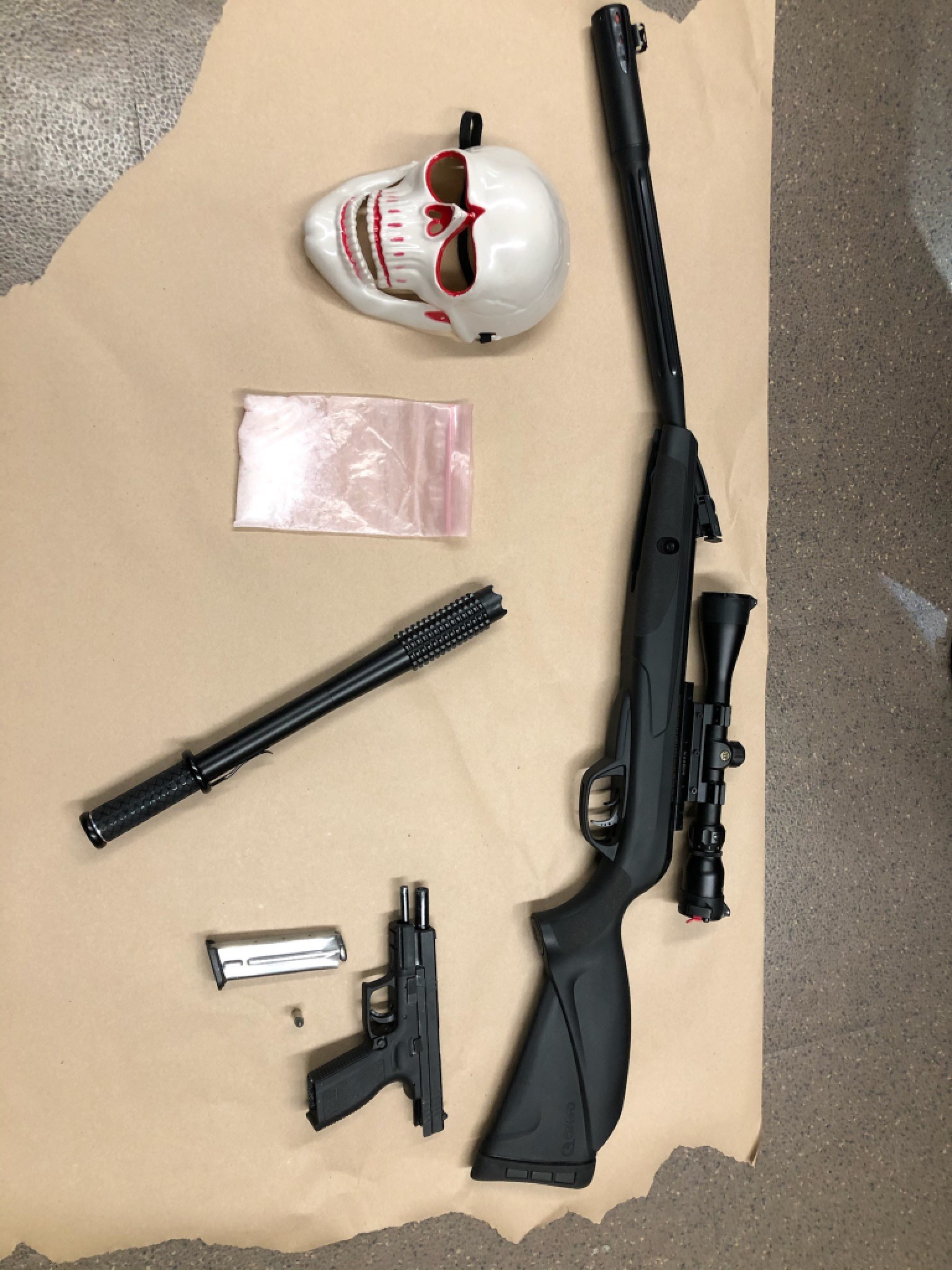 The weapons and drugs confiscated from Carothers, Harwin, and Carpenter, respectively. | Credit: Courtesy

In considering a bail reduction, Weichbrod continued, Judge Hill ought to look not only at Dodge’s current charges but also the “sophisticated criminality” of his actions.

“The illegal manufacturing and selling or giving of non-serialized firearms to known drug dealers is perhaps one of the most dangerous activities possible, and it creates a serious risk to the general public and law enforcement officers,” he said.

Weichbrod also detailed Dodge’s criminal history as a reason for keeping him behind bars. It includes previous arrests for reckless driving, domestic violence, illegal possession of a firearm after his domestic violence conviction, harassment, and trespassing.

Dodge’s current troubles are not the first time his family name has made local headlines. In 2006, federal agents swept through their store near the base of Highway 154. An employee had forged paperwork for nearly two dozen guns and sold them himself.

A closer look at Dodge City’s bookkeeping turned up other records violations, which the business had been cited for in 2002, as well. Their dealer license was revoked, and the Dodges have sold only ammunition, range targets, and other shooting supplies since.

I recently visited their gun store on Mission and State looking to purchase a used handgun... The owner and the guy with him were total @ss wholes... not to mention the ridiculous price they were asking... He simply said, "supply and demand" when I asked about the gouged price...

That store at Mission and State is Far West Guns and is not the one in the article; Dodge City.
Dodge City doesn't sell guns (in the store at least) anymore. They are located in the little strip mall just past Mc Donalds on upper State.
I know you feel you had a bad experience with Far West, but it isn't fair to tie them to illegal activity

@ EDNY I stand corrected- Thank you!

Far West if still owned by the original owners would NEVER Do any ILLEGAL Business.

Completely unfair to confuse these two stores. I've visited Far West five times since last June, nothing for purchase, but lots of useful advice.
The owner is a class act, with excellent customer service skills. As there is practically no ammo or new quality firearms within a 100 miles, most dealers are doing their best. The state continues to remove handguns from the roster. So used handguns are at a premium, with many stores selling on consignment, with the actual owner setting the price.

What's that skull for? I'm assuming something drug or weapon related since it made it into the evidence photos?

According to the article it’s a mask. “Carpenter has a lengthy and violent rap sheet and was apprehended during a robbery in progress at an upper State Street motel. It was his second arrest in 48 hours, after he was caught trying to burglarize a Nopalitos Way business. He was wearing a skull mask and carrying a cattle prod-style taser at the time.”

Hey 11:41
These people are criminals. Don't associate them with patriots.

Guns certainly do not "Make America Great Again." Quite the opposite. The cities with the highest number of murders by handgun are: Dallas (Mayor Eric Johnson), Houston (Mayor Sylvester Turner), Kansas City (Mayor Quinton Lucas), Chicago (Mayor Lori Lightfoot), Atlanta (Mayor Keisha Bottoms), Los Angeles (Mayor Eric Garcetti), Baltimore (Mayor Brandon Scott), St. Louis (Mayor Lyda Krewson), San Antonio (Mayor Ron Nirenberg), Jacksonville (Mayor Lenny Curry), New Orleans (Mayor LaToya Cantrell), and Washington D.C. (Mayor Muriel Bowser). These cities are all suffering from a poor lack of leadership, and yet the voters vote the same pols in year after year. These were all once great cities. Many of our West-coast inner cities are rife with crime and despair....and here in SB, unfortunately, is becoming less and less safe. Just look at all of our parks, nearly all of which have been taken over by less-fortunate individuals with mental/health/drug/money issues.

And what party do the majority of these Mayors belong to and represent...? Well, we're locked in now across the board, so buckle up! As a side note. Meth is horrible and destroys people. The person at their core may be great, but meth makes monsters.

Get Over It, shhh... many here don't like it when you point out that many of our problems aren't a result of the orange man but of the 'vote blue no matter who' mentality.

VOR--dude get over it. Trump lost, no one wants to talk about him any more. Fam, why you love to live in the past? Same with all these people still obsessed about Clinton. Move on.

Hey ALEXBLUE
How was your weekend? Spent mine volunteering at the vaccine clinic in Goleta.

Creepy. Never trust a meth head. They are completely spun.

Let's just hope that these dangerous horrible people do not get early release and are thrown away for a long long time. and by the way there's no way that father Dodge did not know what his son was up to it just is not possible throw them all away to jail shut down the business bar them from dealing weapons adios. As a society we can just not put up with this kind of crap. Once again, horrible horrible people.

The son of the gun store owner is basically strung out on meth so he sells guns and or meth on the side to other methheads. This is a big deal if true. Those kind of drugs limit your comprehension to the bigger problem at stake.

Thanks for providing the photo too - love the matching camo jackets and monster energy drinks.

BasicInfo, In that photo with the cammo jackets, there seems to be something wrong with his right hand. Is he handicapped?

We don't need new gun laws but what we need is our existing gun laws enforced. This particular event should be the harshest possible sentence.

Dad's probably saying to himself... "where oh where did I go wrong?"

SBWalkers--I sincerely doubt that the Dad would take any responsibility whatsoever for his horrible offspring.

"The rate of gun fatalities varies widely from state to state. In 2017, the states with the highest rates of gun-related deaths – counting murders, suicides and all other categories tracked by the CDC – were Alaska (24.5 per 100,000 people), Alabama (22.9), Montana (22.5), Louisiana (21.7), Missouri and Mississippi (both 21.5), and Arkansas (20.3). The states with the lowest rates were New Jersey (5.3 per 100,000 people), Connecticut (5.1), Rhode Island (3.9), New York and Massachusetts (both 3.7), and Hawaii." More current information is not available but the highest death states were in the control of Republicans, the lowest were in control of Democrats. For what it is worth.

True.... California/ Connecticut,RI,Mass,NY are officially, 20% or lower ownership.
Whereas, these other states, ie Alaska,Montana are near or higher than 50%.
Sixty percent of firearm deaths are suicide....many of these, resulting from unemployment and drug epidemic.

One of the people pictured above just got arrested again, on a domestic. Fortunately, no shooting. Hopefully these folks will settle down and change it up. DC used to be about as nice a shop as one could expect for hunting stuff. Too bad things went sideways.