Once again I led a Sierra Club hike from Gibraltar Rock to Flores Peak!

Here are my photos!

This was the second time leading this hike for me and for the Sierra Club! The Wednesday night hikers do this as part of a strenuous hike starting at the Rattlesnake trailhead. We made it easier and more pleasant. We carpooled to Gibraltar Rock, above the Rattlesnake Trail. We then hiked a steep, primitive, little-known trail to Flores Peak. The Wednesday hikers sometimes call this "The Medicine Circle". Elevation gain is about 700 feet in only a half mile! Short but very steep!

There was a red flag warning which affected parking only in Mission Canyon, but some people may have thought it affected this hike. As a result, we had just six people, but we had a good time! We had an energetic new hiker Arvin. And it was good to have Tatiana and Donnis back again! And City College Psychology Professor Spencer Sherman honored us with his presence. He is a very strong hiker, but he wanted to learn this new area.

Despite the red flag warning it was not too hot until we were heading down when it didn't matter much. At one point we could see four paragliders in the air at once. They were also enjoying the good weather!

The trail starts almost straight up on a trail of scree (loose, slippery stones) 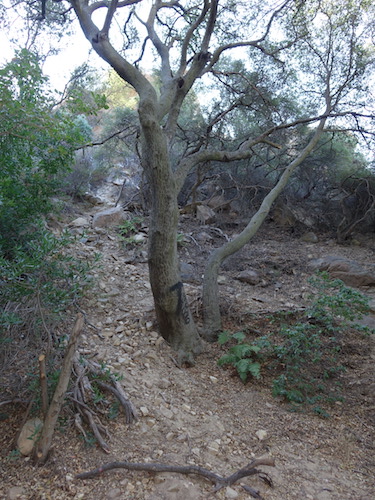 But there are branches (some dead) to hold onto 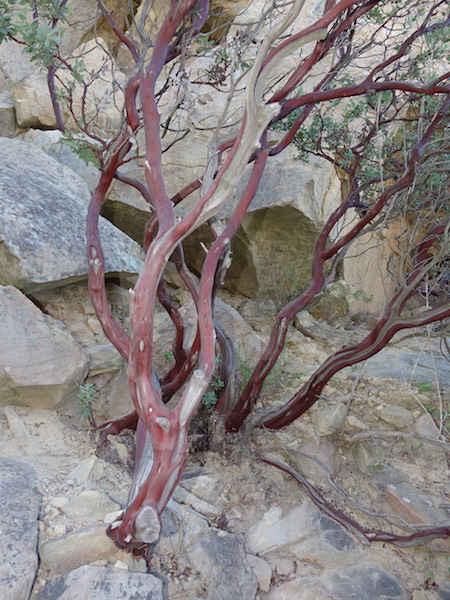 We very soon stopped at a nice little rocky overlook

And then continued on up what quickly became a rocky trail. Steep, but more pleasant than the scree! Energetic new hiker Arvin led the way behind me 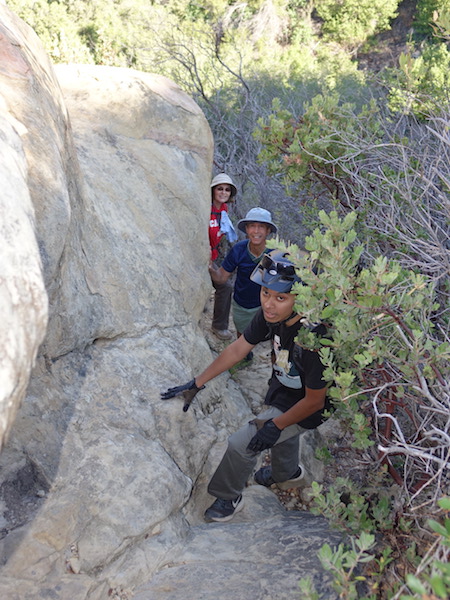 As we climbed we could see Gibraltar Road drop below us

Then we got our first views of our destination, Flores Peak, which is at the right edge of this ridge

Below it is a beautifully complex pattern of rocks

And we paused for group photos there

One hiker opted to stop at this ridge below the final climb to Flores Peak. She got almost the same experience as the rest of us, but avoided the most steep and slippery part near the top.

I had no such assistance!

Looking east from the peak we were met by a set of cairns (stacks of stones). Not sure if they had any special meaning, but they were very artistic!

Of course we had to pose for another group photo at the summit!

Then more exploring along the ridge

We also saw quite a few paragliders enjoying the updrafts as the temperature rose. At first they were just specks in the distance

Then we got closer views

Here we saw one flying over the former convent

This little bowl seems to have been assembled by human hands

Arvin led the way down behind me on the steep scree with a reliable method: The butt slide

Others used that technique, too and it paid off with a safe landing below

As this turkey vulture watched from above

And were greeted by Noah's Ark!

Remember, the Sierra Club has at least four hikes each week! Here you can find one that is right for you!
http://www.santabarbarahikes.com/hikes/sierraclub/listing

Thank you for the kind words, VYINLA. Yes, it is a beautiful spot and it was a pleasure sharing it with such an appreciative group.

Looks like an amazing time! Thanks for documenting Robert!

The head shape is completely

Dog of the Week: Duke

This is the 2nd residential

I don't know if the victim

I don't believe the drowning

I agree that certain youth

Delighted to see these!

Came across a huge