Back in 2008, attorney Robert Coldren and his investment partners purchased a senior mobile home park in Huntington Beach. They were on the cutting edge of what has become a national trend of private equity firms making cash cows out of senior parks, one of the last bastions of affordable housing for older people living on fixed incomes. Coldren immediately converted the property to all-ages and raised lot rents. His profits soared as 130 desperate and vulnerable people scrambled to find new places to live.

A similar story played out in 2013, also in Huntington Beach. Coldren bought a senior park, rents shot up, and another exodus of the elderly occurred. Some reportedly became homeless. Two years later, OC Weekly named Coldren one of “Orange County’s Scariest People of 2015” for his treatment of the residents of his newly acquired San Juan Capistrano park. “Mobile-home dwellers,” the paper warned, “lock your doors and stow your money: Lawyer/developer extraordinaire Robert Coldren is coming for ya!” Then just last year, the Fullerton Observer began documenting the impacts of yet another investment by Coldren and his associates at Pacific Current Partners (PCP) on 380 seniors living in Anaheim.

Coldren himself is getting up in years, so his son and business partner, Spencer Engler-Coldren, fronts the San Francisco firm more often these days. Their website states: “Our focus is on adding value through efficient acquisitions and solving operational and local challenges through our in-house asset management team.” They now own 20 properties in seven states.

On Tuesday, Engler-Coldren spoke to the Santa Barbara City Council about growing local fears of déjà vu at the 69-unit Flamingo Mobile Home Park on Cacique Street, which PCP purchased in 2018. “We’re just trying to be good actors here and follow the law,” he said. 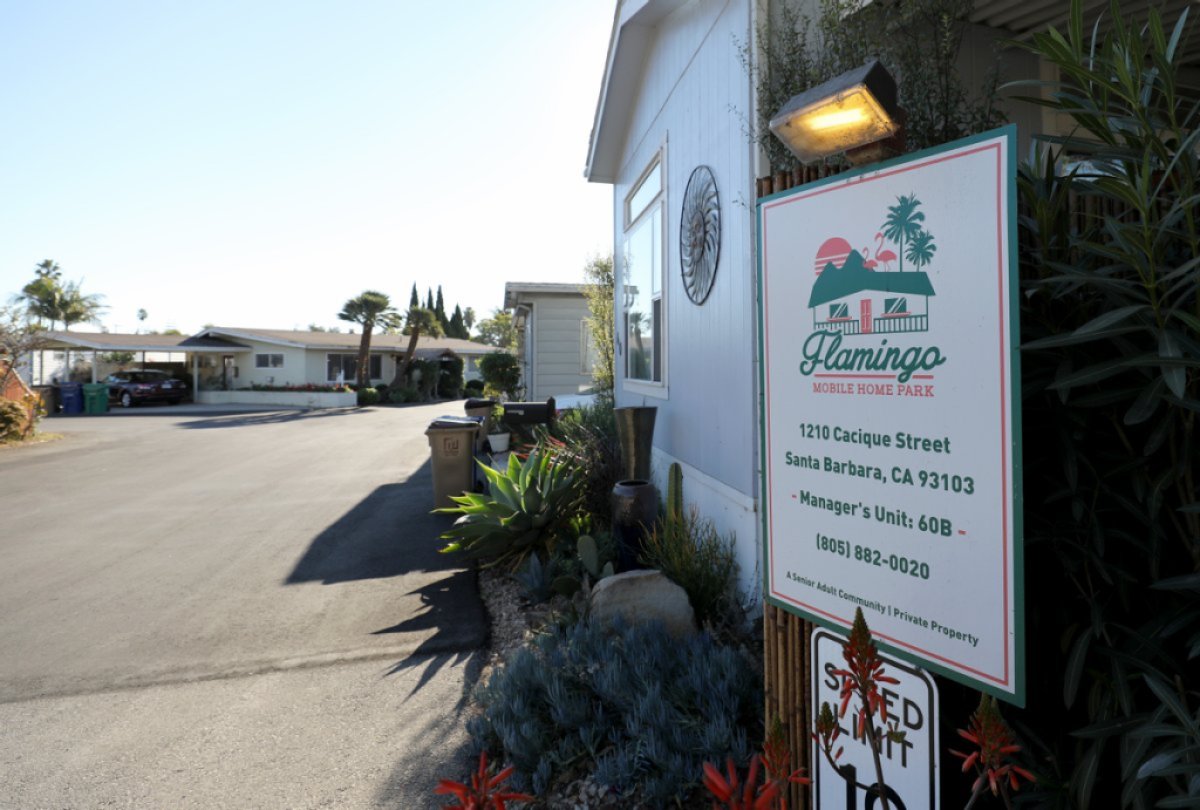 Last month, PCP and its property management arm, Star Management, announced plans to convert the park from senior-only to all-ages. The move elicited immediate fear among Flamingo’s residents, who also worried that PCP would raise rents as well as gobble up the owner-occupied units as they come on the market. Christel Barros, Sharyn Nielson, Dan Villano, and others rallied by Zoom and demanded swift protective action from the council, which it delivered in the form of an emergency ordinance preventing any senior mobile home park in Santa Barbara from going all-ages and enacting a vacancy rent control cap of 10 percent. The order lasts for 45 days, during which time the city will further investigate the issue and attorneys on both sides will confer.

But before the 7-0 vote on the hard stop was taken, tense words were exchanged. PCP lawyer James Ballantine delivered the not-so-veiled threat of a lawsuit if the city didn’t retreat from what he described as its blatant encroachment on his clients’ property rights. “We really don’t want to be in a position where we are speaking to the city through litigation,” he said. “I would urge caution on this. I would urge a dialogue with the park owner rather than just simply ramming legislation down its throat.”

Mike Cirillo, president of Star Management, pushed back against the idea that PCP wants to buy Flamingo’s units and advertise them as rentals or even vacation rentals, as had been suggested by some of the nervous residents. But when the residents pointed out to the council that PCP has already purchased two units and made offers on others, Cirillo hedged his statements. “Granted, we will seize an opportunity every once in a while when one arises, but we have no intention of owning everything,” he said.

PCP partner Brad Hill said when his firm bought Flamingo two years ago, it had the “reasonable, investment-backed expectation” it would be able to raise the homes’ below-market rents up to market rates “when they turned over.” He complained all the protective legislation passed by the city since 2018 to preserve its extremely limited affordable housing stock, including measures to prevent mobile home parks from closing or being converted to other uses, essentially stripped PCP of all its property rights.

The argument made most often by Hill and the others, however, was that Flamingo’s current seniors-only policy was discriminatory against all other demographics, including families with children. “There is a need for affordable housing for all ages, and we’re responding to that demand,” Cirillo said. Betty Jeppesen, head of the Santa Barbara Rental Property Association, echoed PCP’s stance that catering only to seniors was unfair.

Councilmember Eric Friedman, normally fairly reserved in his comments, took serious umbrage with that position. “The argument that somehow protecting vulnerable seniors is discriminatory is one of the most infuriating arguments I have come across,” he said. “It’s a non sequitur. It doesn’t make any sense. It’s infuriating.” Councilmember Michael Jordan took his frustration a step further, calling the accusation “insulting.”

Resident Christel Barros, a retired social worker, had difficulty containing her emotions following the litany of objections and threats put forth by the PCP representatives. “It is really hard for me to talk right now,” she said to the council. “I’m shaking. The intimidating tone of these powerful people is just overwhelming.” Barros resisted PCP’s claims that many of Flamingo’s residents actually welcomed the intended changes. “I defy you to find one single person in this park who supports the changes,” she said. Barros also skewered PCP’s defense that the residents hadn’t voiced any concerns about the conversion during an October meeting. “Well, we didn’t get notified until November!” she exclaimed.

Lastly, Barros blasted the company for trying to use her own words against her, when she said during the meeting she enjoyed the sound of children playing. “I love children,” she said. “I would love to hear their little voices. I grew up at this park myself. But that doesn’t mean I support these changes. Au contraire.”

Councilmember Meagan Harmon noted how other jurisdictions have enacted seniors-only policies for select mobile home parks. Assemblymember Steve Bennett did so while he served on Ventura County’s Board of Supervisors. “We’re not reinventing the wheel here,” she said. Mayor Cathy Murillo said opening Flamingo to all ages wouldn’t necessarily mean families moved in. “It might be wealthy international students. It might be someone looking for a second home,” she said. “The park is within walking distance to the beach. That’s what happens.”

The council will take up the matter again on January 26, 2021. In the meantime, Friedman said, the interim order will provide Flamingo’s residents some stability through the holidays of what’s been a terrible year. They’re clearly distressed, he said. “You can hear it in their voices.”

That should be Betty Jeppesen (not Jefferson). Not a fan.

Congratulations to the city council for showing some spunk. Too often the want to work it out with the business people which means the public loses. But the arrogant attitude that "property rights" prevail over social rights crossed over a line. Whatever the future brings, this was a great moment.

I’m surprised the city council is going so easy on the “owner” of this property. Why not simply declare free rent effective immediately? What would prevent the city from doing that if they have the power to regulate rents?

Oh, I get it, You say something everyone clearly agrees is unreasonable so we will agree with your logic that protecting vulnerable citizens is a stupid thing to do and corporations have the right to do anything they want. You need a new strategy.

Im surprised this was the best you could come up with. What stops the "business" from buying up all the properties when they become available and then dictate the rent by manipulating supply...... oh wait. but we have a shortage....... wait..... whos creating the shortage....... the same people creating the price tags.

We must not forget that "actual motives" of groups called "equity" hide in the outward "skin of decency" PC words to achieve real intention. Well maybe we are "waking up" to what "equity firms" are really out to do. Like other recent movements they use complex jargon meaning greater "profit" to hide their true intentions from investors . Using "children and families", an inherent value, like others do in campaigns hides their real intention of creating lucrative properties, or even worse creating middle- class high-rent ghettos with no open space to play but driveways? They will eventually evict them with market rental rates, and other costs will deplete savings. We need to remain on the lookout for sinister moves like this that remove housing, create homelessness and deprive them of community living matching their needs and incomes. "Manufactured housing", is an alternative to high cost assisted living, and provides decent housing and a protective, supportive community for the elderly who need it. This already happened here a few decades back. Great move to stop it. Now stop other nonsense.

I am glad this is being stopped, hopefully, will be stopped with an ordinance in January, but it is ironic that Barros says she grew up in the park from when her parents bought a home there. Were they seniors or has the requirement changed? It does point out the need for affordable housing for all demographics, however, not just seniors. As the city rapidly converts or tries to convert single family housing into dense multi-story and multi-family developments, AUDs, encouraged by the State, it is interesting that sections of the city are allowed to be mobile home parks.

These developments are pretty dense. It is all asphalt and mobile homes, with maybe one recreation area. The homes range from 500 to 1200 sq ft, with a parking strip next to it. You can get about 28 of them on an acre, or 56 people. That translates to 35,000 people /sq mi. Isla Vista, known for being really dense with students, has about 12,000/sq mi. So I think seniors are doing their share to preserve space.

Well here’s a case of changing the laws after the fact.
If that property were properly zoned. If the City truly cared about senior and low income housing they need to change zoning prior to a person/entity purchasing it.
Like it or not, what laws were in place upon new ownership should remain or the City should pay projected losses.
If the City cared about its people then why are they reactive and not proactive about protecting certain areas and housing now, yesterday. It’s not like short housing g just popped up today. It’s been an issue for years.
That’s why St George stated he’d convert a properly down town to sr housing with whatever recommendations the City had. But the City fought him and is still fighting him with beauratic nonsense.
City, why is your payment most important especially in these troubled times?
No other municipality in our state or country is this so against development.
But hey, it means your property values go up. Who wants to fight City Hall?

They bought a senior only property with low rents, expecting that the City Council would roll over and let them triple the rents. They were wrong. Sometimes your gambles don't always pay off. That's how the business world works.

If you're looking for

Amazing how a small

Let's consider not the

Don't count her out. She's a

And if pedestrians are