Crews responded to reports of smoke just north of The Grove condominium complex in the 7600 block of Hollister Ave around 7:00 a.m. They discovered a large brush fire in a eucalyptus grove near Highway 101 southbound next to the railroad tracks.

The fire had burned approximately 1/4 of an acre before it was extinguished an hour later. Firefighters used foam due to a large amount of debris at the base of the trees. A hand crew then finished up the job to make sure it was fully out.

There were no reported injuries and no one appeared to be in the camp at the time of the fire.

The Amtrak Train was shut down for a short amount of time due to firefighters laying down their hoses on the tracks.

The investigation is ongoing to determine the cause of the fire. 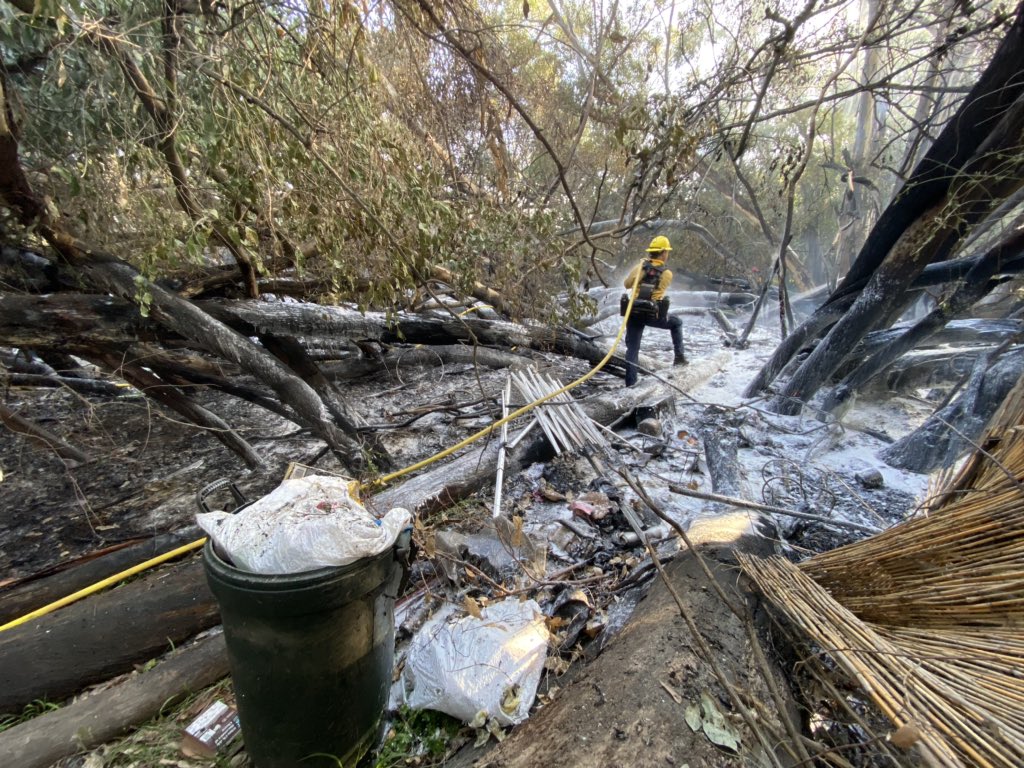 Vegetation fire off Highway 101 northbound at Winchester Canyon. The fire is in the vegetation and trees. Santa Barbara County Fire Department and Helicopter 308 are responding with a full fire response.

Below photos by A.D. 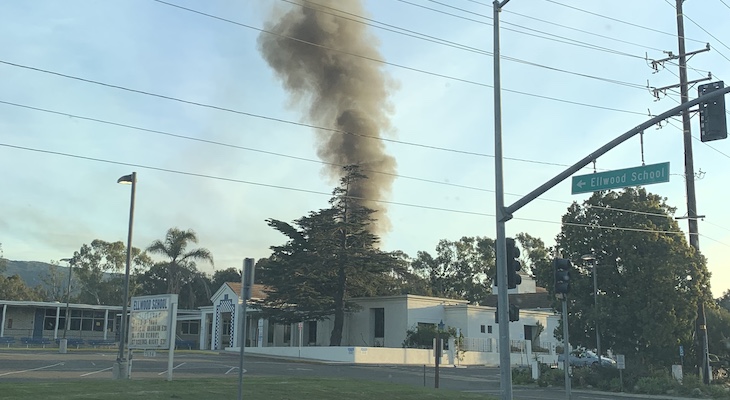 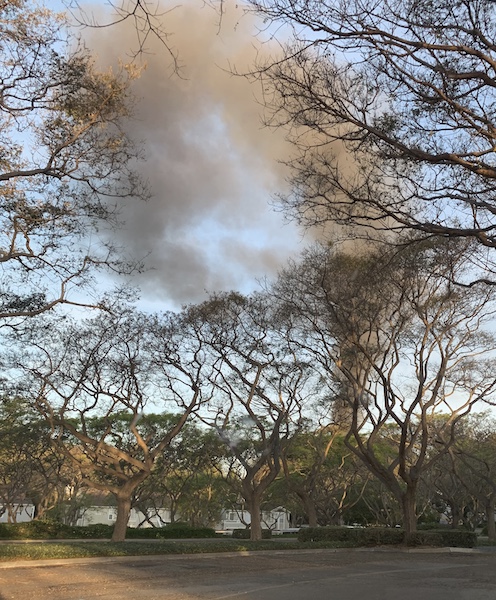 If you take the train between Lompoc and the South Coast, you can see all the encampments starting in this area, all along the tracks through Goleta, SB, and Montecito. Union Pacific needs to lead the charge and get the Cities and the County and Caltrans to clean these out. You see panhandlers on both sides of Las Positas overpass. They live in these encampments. Standing or walking on these on/off ramps is illegal but the police/CHP do nothing as the panhandlers are there every day. Yes, all residents near these areas are endangered because of the threat of fires, not to mention public health issues.

One more example that our current congressman, Salud Carbajal, fails to protect our coast. He has done nothing to get new federal regulations to prevent this toxic build up along federally regulated railway tracks in his own congressional district. New blood in Congress is badly needed and get someone who actually cares about what is happening right here and right now, right under our noses.. Send Carbajal packing and vote for the other guy Caldwell, who has a clear track record protecting the interests of this district.

I have observed some severely overgrown eucalyptus groves in this area. The tree trunks are so close together in some areas that it would be difficult to walk between them. This incident should be a wake-up call to address this problem. These areas need to be cleared, or at a minimum thinned out dramatically. It is fortunate this fire started when it was relatively cool with little wind. However, we have a rapidly increasing population of drug addicts and mentally ill living in these overgrown areas. If we do not take action now to mitigate this hazard, we will see these overgrown eucalyptus groves burn catastrophically. Having said that, I would encourage anyone with property near these overgrown areas to plan for a catastrophic fire. Its a shame some of these groves cannot be thinned and maintained. Instead we will lose them entirely when they burn down.

I hope no butterflies burned....

There is a lot of conflicting information. If it is on the ocean side of the freeway, I apologize. Reports say NB 101 Winchester offramp and the map of the incident on SBCFire shows mountain side of freeway by Timbers / mobile home park.

It was the ocean side.

No trains in the area or affected.

Drove south by it over an hour ago. Looked like a homeless camp caught fire?

Wait, so what side of the 101 was it? Mountain or ocean? Was it near the 76 station? If so, maybe not a homeless fire.

Ocean side. I am standing near the fire trucks now.

Fire contained in the vegetation behind the Grove condominiums between 101 SB and railroad tracks. Several units stationed in the complex parking lot for mop up duty. According to a firefighter, it was an encampment.
Fast response, as usual from County Fire,

What do you mean by "the Grove condominiums"? I can't find anything by that name

After viewing SBCFire.com, it appears the initial report was that the fire was south of the 101 at the train track near The Grove, but first responders realized it was across the freeway near Timbers. There’s a mobile home park nearby.

Unless there are 2 fires, the initial report was correct. I saw the flames in the trees on the ocean-side of the 101 while driving past.

The initial report was correct.

Any updates? Is it out?

Trains just got the go ahead to go through...Per Amtrak channel 161.050

I don't know if it's out at this point not hearing much I know they are on another channel and my digital is not transmitting that channel I don't know why? I'm getting Ventura either way Fire units will be there for some time.

It appears to be by the NB 101 Winchester offramp. Near the Timbers property. So not at the train track, as that’s south of the 101. SBCFire website lists multiple units dispatched.

Another homeless encampment, wait for it...

Sounds like another engine going in they are on another channel, Train service halted for now..

quite a plume of smoke visible

They are calling it The Grove Incident.

The fire is on the rail road tracks North Bound at Winchester...

Haven’t been on the

Olive and Laguna are parallel

"He should probably leave

Right... but obviously CSF is

Right... but obviously CSF is

The issue should never be

Why haven’t they painted stop

Couldn’t agree with you more.

Couldn’t agree with you more.