During the prime oyster eating season, and after a 3-year hiatus, the amazing Shuck & Swallow Oyster Eating Competition returned to the rooftop of the Kimpton Canary, and was bigger than ever! On Sunday, September 16. From 1-4pm, patrons flocked to Canary’s rooftop to watch some of Santa Barbara’s top restaurants indulge in a friendly oyster eating competition.

Guest enjoyed music, dollar oysters, cocktails and an action-packed competition that had everyone cheering for their favorite restaurant team. Local family Steve, Arleen and Lily Feinberg were among the many guests enjoying the beautiful afternoon on the hotel rooftop and savored some delicious oysters. 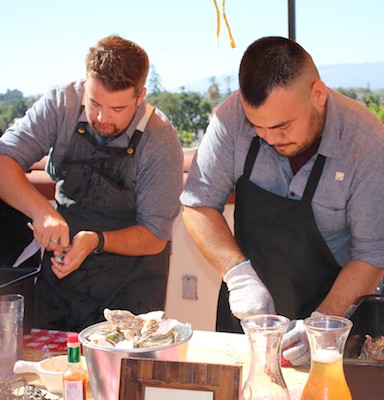 Each restaurant provided a shucker and a swallower, and all raced to see who could eat the most oysters in a 10 minute period. Enthusiastic fans cheered their preferred teams on to victory while enjoying food, drinks and hot music by DJ/MC Scott Topper. Local food judges kept score on what team's shucked and swallowed the most oysters. Participating restaurant teams included Bluewater Grill, Finch & Fork, Outpost, BibiJi, Tyger-Tyger & Blackbird, who all did an amazing job. The Finch & Fork team won with 96 oysters swallowed.

JSG - You are mistaken on

Correction: I meant to write

It was residents who caused

I don't man to piss on anyone

The kneeling is to show an

As anyone who's ever been in