The 34th Santa Barbara International Film Festival began with a fun-filled opening night Red Carpet that attracted local celebs, filmmakers, politicians and more. State Street was alive with activity as the evening began and area media showed up in force to cover the annual event. Despite some torrential rain that closed Highway 101 and required event changes for a few days the 34th took on a “Singin' in the Rain” style of fun film viewing and sensational celebrity award presentations.
Sponsors of the 34th SBIFF included UGG®, Toyota Mirai, Belvedere Vodka, City of Santa Barbara, Amazon Studios,  ADL, Montecito Bank & Trust, IMDbPro, Union Bank, Driscoll’s, Santa Barbara Vintners Foundation, Bentson Foundation, SEE International, Manitou Fund, Patagonia, Winchester Mystery House, Netflix, Mary Beth Riordan, Lynda Weinman & Bruce Heavin, Volentine Family Foundation, and many more supporting through trade.
Opening night film Diving Deep: The Life and Times of Mike deGruy was directed by Mimi deGruy and was a history of the work her husband Mike deGruy had done during his career as an oceanographer, prior to his death during a helicopter crash while shooting in Australia. Mike deGruy was instrumental in bringing special movie viewing and educational opportunities to kids in Santa Barbara through the Mike's Day at the Movies program, enabling grammar school kids to view and learn about the film making process.
Roger Durling introduced Mimi, her children and her production team on stage prior to the showing of the film where the audience, many who knew and loved Mike, were both touched and impressed with the beauty of this labor of ocean love story. The film is a fantastic forever tribute to Mike and all that he stood for. The Opening Night Gala following the film was a huge party at El Paseo Center, where SBIFF attendees enjoyed sips and bites as they danced the night away.
A screening of ROMA followed by a Q&A with the director and star was a huge draw at the Lobero Theatre, despite the rain. Director Alfonso Cuaron and his star Yalitza Aparicio were gracious in answering questions from the audience and media following the film which has gotten numerous awards and nominations and is a major contender for several Oscars this year. I was told it was a very moving program and that people brought flowers to the talented duo and audience members were in tears. 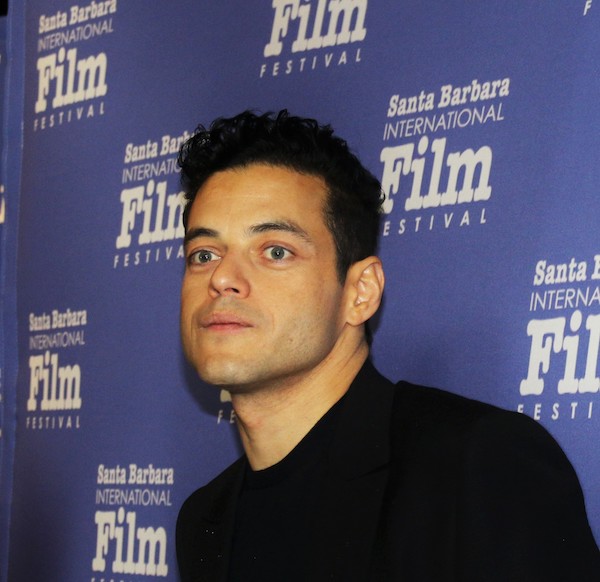 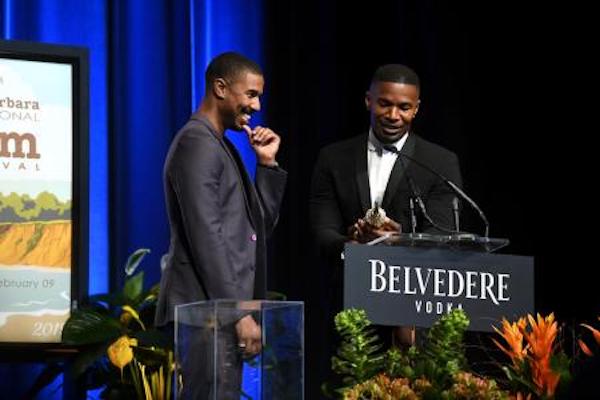 Michael B. Jordan and Jamie Foxx
The Vanguard Award, a tribute that was created with the intention of honoring actors with the tenacity to forge new ground in their craft, was presented to Michael B. Jordan, who was greeted by a huge crowd before walking the carpet. He was very entertaining and interesting on stage and the audience seemed charmed by his candor during the interview. The Cinema Vanguard Award waws presented to actor Michael B. Jordan, for his work in two of the year’s most critically acclaimed, culturally significant and record-breaking box office hits: “Black Panther” and “Creed II.” The Cinema Vanguard Award recognizes actors who have forged their own path, taking artistic risks and making a significant and unique contribution to film. The one-on-one career retrospective conversation was moderated by Scott Feinberg from The Hollywood Reporter. Jordan was deeply touched by the standing ovation he received from the audience. At the conclusion of the conversation portion, Feinberg invited Jamie Foxx to present Jordan with the award.
Foxx received a standing ovation when he took to the stage and proceeded to deliver a heartfelt and hilarious monologue in which he not only praised Jordan’s skill as an actor, but also teased him about his sex appeal. He (Foxx) even engaged in a playful dialogue with the audience. “It looks good coming from you,” Foxx told Jordan. “The decisions that you’ve made and what you laid in the groundwork of ‘Fruitvale Station,’ and then to take that DNA and put it into ‘Black Panther,’ a huge hit, but you brought so much integrity. You made us walk different. You made us feel better about ourselves, whether you were black, white, red, or brown, you made us feel something. And I told you that is something very hard for the antagonist to do.”
After receiving the award, Jordan expressed his gratitude and shared some insight into what motivates him. “I’m not in this for fame. I’m not in this for the attention. I’m really trying to create a blueprint to show people that if you’re good, and you’re good-hearted, and you do the right thing, that you can be successful,” he told the audience. “You can hold yourself to a higher standard and you don’t have to cut corners. There is no substitute for hard work and you don’t have to do it by yourself, you don’t have to do it alone. You surround yourself with people that believe in your vision, that are like-minded, that are like-hearted, and you’ll be surprised at where that will take you.” Jordan proceeded to make a commitment to produce film and television that “represents all of us,” as well as create opportunities for people “of all walks of life” both in front of and behind the camera.
10-10-10 Awards were presented to student competitors following a showing of this years films. Santa Barbara High School and SBCC students and their parents and mentors were in attendance at the Arlington for this special award recognition during the annual Santa Barbara International Film Festival.
The Closing Film Spoons brought to a close the 2019  Barbara International Film Festival. SPOONS: A SANTA BARBARA STORY is an exploration of how one of the most significant corners of the world produced, and continues to produce, some of the most talented surfers and innovators. Deeper than all is a story of craftsmanship, work ethic, renegades and tradition. This is a film that goes beyond the time spent in the ocean to define how one spends a lifetime.
Congratulations to SBIFF on their 34th event honoring the film industry, and to the filmmakers, award recipients, volunteers and attendees. Despite real weather challenges it was a wonderful week of film enjoyment and festival history. Dates for the 2020 SBIFF will be January 15-26. For additional information visit: www.SBIFF.org.
Please Login or Register to comment on this.