Pandora’s Box, perhaps the first feature-length documentary about periods, opens by stating of the 800 million people around the world who are menstruating, half had no knowledge about periods before their first cycle. This sets the stage for a film that spans four continents, touching on various cultural, political, and personal perspectives, and the importance of a collective world-wide movement with menstruation as the cornerstone of achieving equity.

Access to information, as well as menstrual products, while at its core should be a basic human right, is instead viewed as a political issue, even in some of the richest countries in the world. Meanwhile, Kenya, recognizing that half of their population menstruates, over a decade ago was the first country to ditch the tax on sanitary products, and since 2011 the Kenyan government has allocated millions of dollars from their budget to distribute menstrual products to schools in low-income communities. The impact is seen within schools where children can continue their education, in the home, where resources can go towards food and other necessities, as well as the workplace.

Normalizing a topic as natural and commonplace as menstruation should not be groundbreaking, but in societies and cultures around the world, there are still deeply seeded taboos that reflect the underlying gender inequality still prevalent. Through conversations and films that touch on the humanity of this topic, we see examples around the world of individuals, communities, and organizations that have taken matters into their own hands where governments have failed to recognize, let alone take action. But through persistence and organized action, we’re starting to see change. 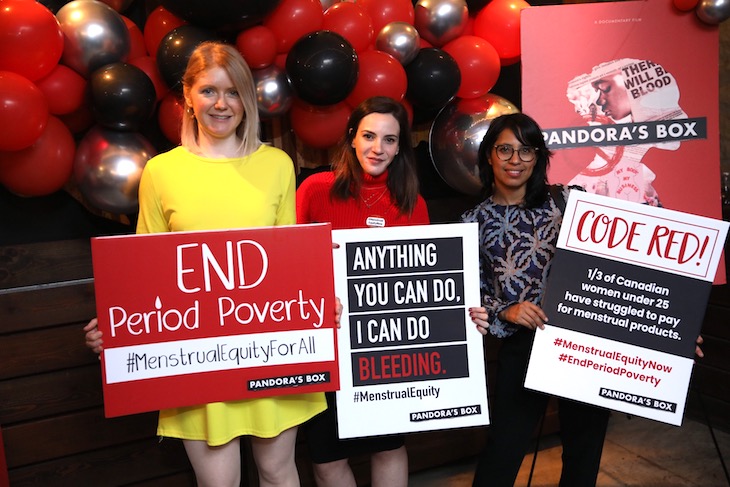 In the United States, the statistics at the end of the documentary were already outdated since states such as California no longer tax menstrual hygiene products as a luxury tax, leaving 31 states that currently do. However, as lawyer and leading menstrual activist Jennifer Weiss-Wolf aptly pointed out in the Q & A following the film, California just has a temporary tax exemption, which means we need continued action to make this exemption a law. For reference items such as Viagra, pop tarts, marshmallows, golf club memberships, and condoms are exempt from sales tax while tampons are not.

Pandora’s Box is presented by Diva International, makers of the DivaCup, a reusable menstrual cup that’s been selling internationally since 2003. They made the ranking of Canada’s Fastest-Growing Companies in 2017 with a five-year revenue growth of 712%, reflecting a strong shift towards menstrual products that are more sustainable and cost-effective.

Executive Producer and CEO of Diva International and Founder of DivaCares, Carinne Chambers-Saini and I spoke briefly during the after party of their U.S. premiere at SBIFF. I thanked her, sharing that DivaCup was how I first learned about menstrual cups years ago. She then shared a little about how the company started and spoke to how this film was a passion project that was two years in the making. For anyone who remembers the short documentary, Period. End of Sentence that won an academy award last year, Pandora’s Box felt as though it was wanting to expand the conversations and perspectives further through a feature-length documentary.

The documentary took a jarring pivot when an interview was interrupted by a voice off-camera to ask whether the interviewee had heard of "Days For Girls" and the work they were doing in Kenya. Ultimately, that scene provided some of the most unscripted insight into how passionate people are about menstruation since they understand the tangible benefits that can be seen almost immediately on an individual basis and collectively as a society. Areas where the film fell short, as one member in the audience from India expressed in the Q & A, were with directorial decisions to utilize cultural points out of context to try and provide scenes of humor seemingly geared towards a Western audience.

Overall, the film was informative and generally served as a call to action with regards to the importance of recognizing our shared humanity and the tangible actions that can be made by each and every one of us, as demonstrated time and again from women and individuals across the globe who’ve taken action so that basic dignities and rights would not be stripped from others in the same way that they themselves witnessed or experienced. Access to menstrual products and information can be achieved, and in doing so, we will simultaneously make tremendous strides towards gender equity, which is imperative, since any alternative is absurd.

From the Q & A after the film viewing, it’s unclear what’s next in terms of whether this film will be made accessible to others outside the festival as their response was to follow their website to learn more. For anyone wanting to take action now, there’s a myriad of ways to support and get involved. You can learn more at period.org, daysforgirls.org, #periodpositive, Safe N’ Happy Periods, Myna Mahila Foundation, periodequity.org, #HappyPeriod, get involved locally with Direct Relief Women, and many more.

There will be one more film screening at the SBIFF of Pandora’s Box on Sunday, January 19th at 1:15, Fiesta 5 theatre.

Christine Brown is the founder of Kind Cup, which produces a redesigned menstrual cup, based in Carpinteria.