A federal judge late [Wednesday] reinstated the Bureau of Land Management’s 2016 methane waste rule, aimed at protecting people and the climate from methane waste and pollution from oil and gas extraction on public lands. The ruling, requested by a coalition of environmental and public health groups including California-based Los Padres ForestWatch, is the third defeat for the Trump administration’s efforts to suspend, delay or repeal the rule.

The rule requires oil and gas companies operating on public lands to take reasonable measures to prevent the waste of publicly owned fossil gas. It will go back into effect in 90 days. Such measures significantly reduce pollution from methane, a dangerous greenhouse gas 86 times more potent than carbon dioxide, and are an important step to address the climate crisis. 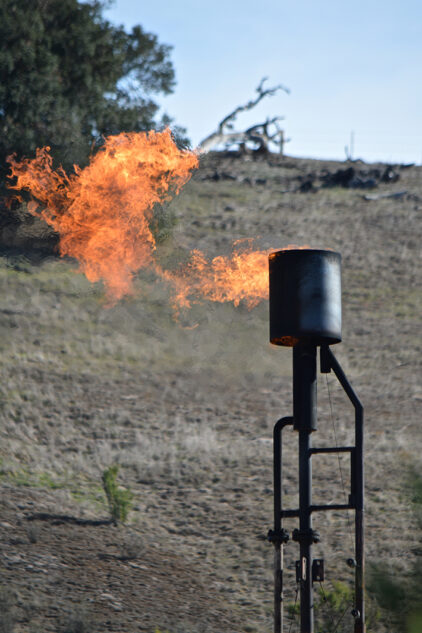 “The Trump administration has abused every opportunity — legal or otherwise — to maximize the oil and gas industry’s profits at the expense of taxpayers, public health, and the climate,” said Erik Schlenker-Goodrich, executive director of the Western Environmental Law Center. “We welcome the court’s forceful repudiation of the Trump administration’s reckless and unlawful conduct.”

In 2018, a broad coalition of conservation and citizens’ groups challenged the cancellation of most provisions of the rule after defeating prior Trump administration attempts to end these protections. In today’s ruling the court found the administration had downplayed the significance of the rule’s benefits to public health, local communities and the climate. The court also determined the Bureau’s cost-benefit analysis ignored global climate costs.

Reviewing the BLM's effort to undo the methane waste rule, the court found "the rulemaking process resulting in the Rescission was wholly inadequate. In its haste, BLM ignored its statutory mandate under the Mineral Leasing Act, repeatedly failed to justify numerous reversals in policy positions previously taken, and failed to consider scientific findings and institutions relied upon by both prior Republican and Democratic administrations."

“It’s despicable that the Trump administration has repeatedly tried to gut modest protections for our lungs and our climate to benefit a dirty, climate-destroying industry,” said Michael Saul, a senior attorney at the Center for Biological Diversity. “We’re grateful that the courts continue to reject these unscientific, indefensible attempts to give fossil-fuel companies a license to pollute.”

The coalition’s lawsuit sought to reinstate the 2016 rule to reduce methane waste and pollution and address the longstanding problem of reduced production royalties caused when the fossil-fuel industry wastes publicly owned methane. The U.S. Government Accountability Office estimates lost royalties at nearly $23 million annually under the pre-2016 regime. The 2016 rule will help taxpayers reclaim about $800 million in royalties over the next decade.

A Delaware-sized methane “hot spot” in New Mexico's San Juan Basin is the major contributor to San Juan County’s “F” grade on ozone from the American Lung Association. In Texas and New Mexico’s Permian Basin, recently the highest-producing oil basin in the world, gas flaring is now at an all-time high of 750 million cubic feet per day. That’s a 650 percent increase over less than a decade, and the highest emissions ever recorded from a U.S. oil and gas basin. These data show that voluntary methane waste measures aren’t working.

In addition to flaring and methane emissions, gas waste associated with oil and gas development results in smog pollution and releases other toxic pollutants, such as benzene, toluene, ethylbenzene and xylene.

The 2016 rule was crafted over four years with input from the oil and gas industry. It accounted for nearly 300,000 public comments and earned approval from 75 percent of Westerners.

“The Bureau’s methane rule is a common-sense solution to protect our climate, reduce air pollution and save taxpayer money,” said Will Roush, executive director of Wilderness Workshop. “The court’s reinstatement of the rule is a step forward for people across the west and especially those in communities disproportionately impacted by pollution from oil and gas development.”

“Today’s decision protects our forests, parks, wildlife refuges, and monuments from harmful greenhouse gasses caused by oil development,” said Los Padres ForestWatch Executive Director Jeff Kuyper. “From the Sespe to the Carrizo Plain and beyond, California’s public lands—and the communities that depend on them—can all breathe a lot easier.”

“Unabated methane releases from oil and gas operations on public lands will harm both wildlife and the ability of people to use and enjoy our natural treasures—all while fueling the fire of the climate crisis,” said Jim Murphy, director of legal advocacy for the National Wildlife Federation. “Rescinding the 2016 rule represented an illegal, unwarranted, and unwise step backwards in efforts to conserve and restore our public lands and reduce the harmful emissions. Today’s court decision represents a huge victory for sound science, public health, and the environment.”

“For over three years, this administration has attempted to get rid of BLM’s waste rule based on a myriad of inadequate justifications, trying to grant favors to their corporate friends at the expense of the public’s well-being,” said Darin Schroeder, attorney from Clean Air Task Force who co-represented National Wildlife Federation with the Western Environmental Law Center. “We are grateful that the rule of law has yet again prevailed.”

The largest component of natural gas is methane. Most homes have methane gas stoves. As long as there's fracking and other types of oil extraction, there will be methane flaring. Anyone who's driven past La Conchita at night has seen it. Something worse? One of the largest man made methane leaks ever to occur took place 5 years ago at Aliso Canyon in Porter Ranch at a SoCal Gas facility. They pretended it didn't happen and when caught, are still dragging it through courts. Worse? There second facility is here in Santa Barbara just east of the Goleta Slough. They were even given a permit a few years ago to Increase storage. So we, in Santa Barbara, are sitting on one of the largest man made methane storage facilities in the US if not the world. We here nothing of this facility. No transparency. We live off the hope that everything is just A-Okay. Let's hope so.

Terrific news. This made my day.

And NOT respecting this "rule

Yeah, the design change is

I'm so happy to see two

I know all the ultra