Awe-inspiring, breathtaking, amazing, and spectacular - just a few of the superlatives used for old growth Coast Redwoods.  Standing in a silent grove of them, people often describe the experience as profoundly spiritual.  There are good reasons for this uplifting emotion, because these conifers are the very tallest of all trees, some of the longest-lived, and certainly the most massive living things on earth.

Coast Redwood trees have been recorded with heights of 380 feet tall - and it is thought that some now exceed 400 feet.  They can develop a trunk of up to 30 feet in diameter - and can live to be 2,200 years old!

While it may not be possible to duplicate the immense size and grandeur of these ancient trees in our Mediterranean environment, we can grow magnificent specimens in Santa Barbara - though on a much smaller scale.  Here, Coast Redwoods can reach a height of 60-90 feet with a spread of 20-30 feet.

During the last Ice Age, Coast Redwoods had a much larger natural range than they have today.  Currently, they are native only to a narrow band of the California coast (470 miles long and up to 45 miles wide) from Northern San Luis Obispo County to just above the Oregon border.  This coastal area is often swathed in the dense fog that rolls in from the Pacific Ocean.  Surprisingly, these enormous trees depend on fog, especially in the dry season when rain does not recharge the water table.  The fog condenses onto the flat needles where it is directly absorbed, supplying a large percentage of the trees’ water needs.  Any excess condensation drips to the ground at the base of each tree, supplementing ground water to the roots.

Coast Redwoods are monoecious, meaning that each individual tree bears cones of both genders, pollen cones (male) and seed cones (female).  Amazingly, this tallest of tree species has one of the smallest of all seed cones - ¾ to 1 inch long.  Its pollen cones are even smaller - less than 1/4-inch long.  Pollinated seeds are winged, incredibly small, and very lightweight - 8,000 seeds weigh just an ounce!

The lush foliage is created by flat needles (1/2- to 1-inch long) that are bright green on top and blue-white underneath.  The crown is narrowly conical.  The bark is strikingly reddish-brown, fibrous, deeply furrowed, and thick enough to protect the tree from all but the hottest fires.  The typically straight trunk has a significant flair at the base.

Raising Coast Redwoods locally can be quite easy, provided you plant them in the right location.  They are not considered drought tolerant, so finding a suitable site is crucial.  A good location would ideally have regular irrigation in the dry season - or a reliable source of natural runoff or subterranean water - and sufficient space to allow the tree to grow to its full size at maturity.  The best location would also enjoy our summer fog - but would not be too close to the ocean, since salt spray will damage the foliage.  They are also quite sensitive to soils and reclaimed water that may have a high salt content.

Coast Redwoods can tolerate moist soils and even occasional flooding but do better with a sandy loam and good drainage.  With favorable growing conditions, they are fast-growing, adding 3-5 feet in height per year.  They can often survive drought but will then grow much more slowly and will have sparse and browning foliage.  Do not be alarmed when older needles brown and begin to drop in late summer and fall; this happens annually in advance of new needles sprouting out in late winter and spring.  The soft matting of fallen needles makes a superb natural mulch, which retains moisture and provides beneficial organic matter and nutrients for the roots.  Coast Redwoods require little maintenance, except for occasional fertilizing if their needles begin to yellow.  They are resistance to most tree diseases and are rarely affected by insects.

While Coast Redwoods can be propagated from seed, the seeds have a low viability rate, and the resulting trees are quite variable in appearance.  For these reasons, almost all Coast Redwoods available for purchase at nurseries are grown asexually from cuttings, making the new trees genetically identical and visually uniform.  Some of the most popular and readily available varieties are ‘Aptos Blue’ (with dense blue-green foliage and drooping branchlets), ‘Soquel’ (with blue tinged foliage and horizontal branches that turn up at the tips), ‘Majestic Beauty’ (with dense green foliage and pendulous branches), and ‘Filoli’ (with a distinctively blue colored foliage).  In addition, there is a handsome dwarf spreading variety, ‘Adpressa’, which only reaches 3-6 feet tall. 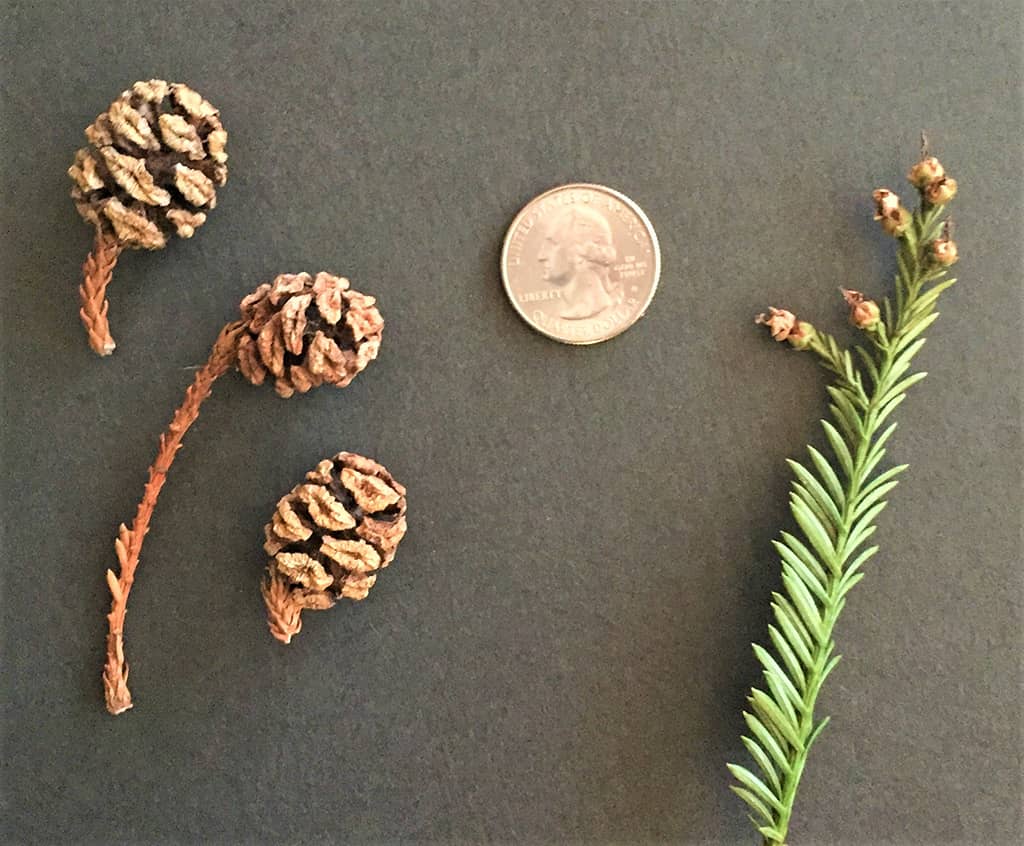 The botanical name for Coast Redwood is Sequoia sempervirens.  It is the sole remaining species in its genus.  The genus name, Sequoia, was the Cherokee name of the scholar and Native American, George Gist (1770-1843), who invented the written alphabet for his people's language.  The specific epithet, sempervirens, is a combination of the Latin words “semper” (meaning always) and “virens” (meaning green).  Coast Redwood has additional common names, California Redwood and Coastal Sequoia.  It is a distant relative of the Giant Redwood (Sequoiadendron giganteum) in the Sierra Nevada.

In addition to being a magnificent forest tree, Coast Redwood has been an extremely valuable tree for the timber industry since the early 1800’s.  Its lumber is renowned for its resistance to insects and decay, as well as its beauty and light weight.  It has been used extensively for building construction, outdoor decking, railroad ties and trestles, and furniture.

For landscape purposes, this evergreen tree makes a grand statement in private gardens and public parks.  Its prized ornamental status earned it the Royal Horticulture Society’s Award of Garden Merit.  It is considered such an iconic symbol of California that it has formally been designated as our State tree.

It creates an excellent screen or a sturdy windbreak, when planted in large numbers. Surprisingly, it is also frequently used to create miniature bonsai!

Mature Coast Redwoods can be seen all around Santa Barbara and surrounding communities.  In Goleta, perhaps the oldest specimens to be found in anywhere in the County are at the Stow House and at the Sexton House (on Hollister Avenue) - these trees are close to 170 years old.  The tree at the Stow House is certainly over 120 feet tall.  At Stow Grove Park, there is a grove of some 300 trees that were planted in the 1930’s.  In Santa Barbara proper, multiple Coast Redwoods stand at the County Courthouse, at the Genealogical Society (Castillo Street near Highway (101), and in the Redwood Section of the Santa Barbara Botanic Garden.

Have to give away our 25’ California Coastal Redwood. It’s free, but needs to be moved by someone who is bonded and insured. Please message back and let’s relocate it. Otherwise it will be firewood for someone else.
Pictures upon request. Located behind Fairview Center residential area. Thanks. Bob

The first year I taught at La Cumbre Junior High School (1967) we had Redwoods in tubs as classroom Christmas trees. They were then planted at the edge of the fields next to the Fire Station. Most of them have survived. Don “Skip” Skipworth organized this and I believe the trees came from Kata Shi Nursery in Goleta.

oscar's constituents are a

I work near the old Saks/BOFA