This house collapsed on Montecito Creek during the Jan. 9 debris flow, just below the East Valley Road bridge, while the house next door remained standing. The county Board of Supervisors on Tuesday streamlined the review process for debris flow survivors who want to build back essentially the same structures that they lost in the disaster. (Photo by Melinda Burns)

The county Board of Supervisors this week cleared away the red tape for Montecito property owners who want to rebuild what they lost in the catastrophic debris flow of Jan. 9.

Voting 5-0 on Tuesday, the board said that no design review or zoning permits would be required of Montecitans who propose to build back essentially the same house, garage or guest home that they owned before the disaster. Such proposals, known as “like-for-like,” will need only building permits, which do not require notice to neighbors. Building permits cannot be appealed.

The “like-for like” exemptions for debris flow survivors will go into effect on June 14. They will apply even if replacement homes have to be elevated because of mud on the property, and even if they have to be relocated elsewhere on a lot because a nearby creek has changed course. The county requires a 50-foot creek setback for new homes.

“People have to move to a safe place,” said board Chairman Das Williams, who represents Montecito and wrote the ordinance amendment regarding the relocation of structures. “Any process that takes a year-and-a-half really endangers the ability of the community to get back to their lives.”

The new rules will allow Montecitans to increase the height of like-for-like structures by 10 percent without design review or zoning permits, regardless of whether the structure must be built at a higher elevation because of mud deposits on the property. The height will be measured from the “lowest finished floor” to the peak of the roof, the board said.

“We do not want to force people to remove the mud,” Williams said.

More than 200 homes and 100 garages, guest houses, pool cabañas and other accessory structures were either destroyed on Jan. 9 or were badly damaged and have not yet been restored. Most property owners are waiting for the Federal Emergency Management Agency to release a recovery map in June before applying for permits. The map will set new flood water elevations along the creeks, based on the topography that was changed forever by the massive river of mud and boulders on Jan. 9. 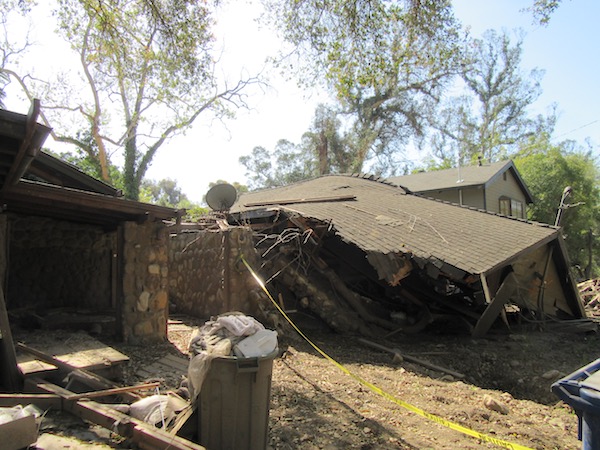 A number of Montecitans who lost everything in the debris flow repeatedly thanked the county on Tuesday for helping to shepherd them through their recovery, but they said the uncertainty about rebuilding was hard to handle.

“I definitely appreciate your willingness to be flexible and not delay the process any longer,” John Keating told the board, speaking softly as he explained that his vocal chords had been damaged by fire on Jan. 9. Keating’s house on East Mountain Drive exploded and lit up the pre-dawn sky when the debris flow on San Ysidro Creek ruptured a gas line.

“That light in the darkness gave our family a way to find a path out of our house,” Maggie Geyer of East Valley Road told Keating and the board. Geyer urged the supervisors not to “add another layer” of review on top of everything else the survivors had to contend with.

“Every day we have to wake up and find something positive,” she said. “Debris removal is very, very hard.”

Anne Price, associate director of La Casa de Maria, a nonprofit retreat and conference center at 800 El Bosque Road, said nine out of 17 buildings were lost on Jan. 9 and five were severely damaged. The banks of San Ysidro Creek along the property have receded by up to 15 feet, Price said, adding that without the like-for-like amendments, “we would be very impacted as to rebuilding.”

In voting on Tuesday, the supervisors brushed aside earlier requests by the Montecito Association, a homeowners’ group, and the Montecito Planning Commission, an advisory group, to delay their decision until after the FEMA map is released next month. These groups had argued that the maps would help the county develop a better strategy for building back a safer and more resilient community.

The Montecito Association, Montecito Planning Commission and county Planning Commission also had recommended that the board require design review by the Montecito Board of Architectural Review for any proposed changes in the exterior design of rebuilt structures. Such checks and balances, they said, would allow neighbors to have a dialogue about privacy, views, noise and even sunlight.

But the supervisors wanted to speed up, not slow down county review for the debris flow victims. Under the circumstances, neighborhood aesthetics does not trump people’s “ability to survive,” Williams said, adding that lengthy delays in rebuilding could effectively exile them from their community.

On Tuesday, the board said design review would be required only if the exterior design of a proposed structure was “substantially different” from what it was replacing.

Supervisor Janet Wolf recalled the difficulties her own family faced after their home burned down in June, 1990, during the Painted Cave Fire on Highway 154. Wolf said she wanted to remove any “glitches along the way” for Montecito residents who lost their homes.

“It was important for us to get back to some sense of normalcy,” Wolf said. “You just don’t want roadblocks.”

My understanding is that this FEMA map that everyone is waiting for is a hazard map showing the areas that could be potentially affected by another debris flow. But the 100-yr floodplain maps (FIRMs) that determine whether you have to buy flood insurance or elevate your house above the predicted creek water surface elevation will not change. The stories that I have read have not been clear about this. The hazard risk map procedures are notoriously uncertain with regards to how much runoff occurs and how much sediment and boulders are mobilized. The lucky people will have housing pads that are outside of both boundaries. But if they are outside of the 100-yr boundary but inside of the hazard boundary, will banks give them mortgages and will insurers give them insurance? In this case only the wealthiest that don't need loans or insurance can afford to rebuild.

Let's fast track Cal Trans to widen 101 all through Montecito because the traffic is beyond bad due to the "pinch down."

I have read where this is eventually going to happen, but will the Cito folks continue to use the NIMBY excuse to not widen? I sure hope because it should have happened 15 years ago.