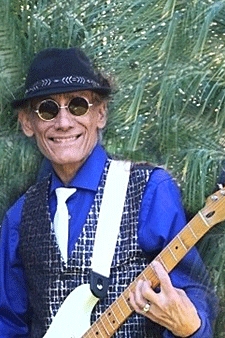 Ernest "Ernie" Joseph Orosco was born in Compton, California, on Dec. 15, 1946 and he passed away on Nov. 3, 2021 in the Compton Wing of Santa Barbara Cottage Hospital.

It was his father Joe M. Orosco who during a Pacific World War II battle, prayed to God to survive the war. In that prayer, Joe asked the Lord for three sons, and he prayed he would live to raise them to be musicians. The prayer was answered, and Ernie Orosco was the first of three sons born to parents Joe and Esther Orosco.

Ernie, along with his two brothers Raymond “Cory” and Brian, were Santa Barbara music pioneers whose musical travels eventually spanned the entire United States. The band Ernie & The Emperors was the first group from Santa Barbara to sign with a major label, Reprise/Warner Brothers Records. The band's No. 1 regional hit song “Meet Me At The Corner” was released in 1965.

Based in Atlanta, Ernie soon established himself as a popular favorite. He performed notable shows that launched his career including The Jimi Hendrix Memorial, The Nashville Music Festival, and the historic 1970 Love Valley Music Festival in Statesville, North Carolina, which has come to be noted by music historians as “The birth place of Southern Rock."

Ernie eventually returned to his roots in Santa Barbara, where he continued to perform locally as Brian Faith Band aka Ernie & The Emperors. It was at this time, along with brother Cory, that he established Songwriter's Recording Studio (SRS). Their recording studio became an integral part of the local music community.

As studio engineers/producers, Ernie and Cory had the distinction of being the first to record now mega star Katy Perry, and recording the first demo recordings for Jewel and countless others.

Aside from his accomplished musical career, Ernie was always proud of wearing the “Olive and Gold,” leading his team as a football team captain and a Santa Barbara Don quarterback.

Ernie was preceded in death by his father Joe Orosco in 2002, his mother Esther in 2011, and brother Raymond “Cory” Orosco in 2017. He is survived by brother Brian and sister Elaine Orosco.

The family wishes to thank Santa Barbara Cottage Hospital MICU and the Compton Wing doctors and nurses for their extraordinary care and service.

RIP Ernie! I grew up in the 60's in Santa Barbara and Ernie & the Emperors were one of the best bands in town. We used to have a lot of fun going to see them play. A great part of growing up in Santa Barbara. My sincerest condolences to the family.

I was too young for the Earl Warren heyday, though I went to open-lawn concerts at the Bowl in mid-70's. I met Ernie around 1976 or '77. He was such a lovely man, just a prince. I was young, my social circle people were musicians, and he was kind and gentlemanly and outgoing and just wonderful to be around!! I so wish I'd spent more time with him and gone to more concerts. Ran into his partner, must've been Cathy Swain, years later, and she remembered me. Bless him loving heart, RIP.