Electric vehicle (EV) drivers now have more fast-charging options along state highways in Central California — including at the popular Tejon Pass Rest Area near the Los Angeles/Kern County line — with the installation of 22 new EV fast chargers at nine locations by the California Department of Transportation (Caltrans).

“Fast chargers are essential to continue growing EV adoption in California and meeting our state’s goals for combating climate change,” said Caltrans Director Toks Omishakin. “Expanding the availability of convenient fast-charging stations along state highways is significant for the future of California transportation.”

The Level 3 DC fast chargers provide an approximate 80 percent charge in 30 minutes to EVs with fast-charging capability. The chargers have universal connectors and are able to serve all EVs on the market, including Teslas with an adapter. Charging is free with no time limit.

According to the California Air Resources Board, 70 percent of California transportation sector greenhouse gas emissions come from light-duty vehicles, including passenger cars, SUVs and light-duty trucks.

“This project is a tremendous example of how public agencies can collaborate with the private sector to fill gaps in the zero emission vehicle (ZEV) market,” said Tyson Eckerle, Deputy Director of ZEV Market Development at the Governor's Office of Business and Economic Development (GO-Biz). “More chargers throughout the state will help to incentivize the purchase of EVs, getting us closer to Governor Newsom’s goal of 100 percent ZEV sales by 2035.”

The Tejon Pass Rest Area is about 60 miles north of Los Angeles and 40 miles south of Bakersfield and is a popular stopping point for drivers traveling along I-5. The four new fast chargers are located on the southbound side of the interstate. Motorists traveling north on I-5 can exit at the Lebec off-ramp to Lebec Road, which loops over the highway, to access the fast chargers, including one that is compliant with the Americans with Disabilities Act.

In addition to the new chargers in the Central Valley, Caltrans has six Level 3 DC fast chargers in San Diego County, two in Monterey County and one in San Luis Obispo County, and two Level 2 charging stations in Napa County and three in Contra Costa County – all available to the public.

The U.S. Department of Energy has a searchable database on public alternative fuel stations in California and nationwide.

Motorists can find real-time traffic information and rest area locations at Caltrans’ Quickmap by clicking on the Options menu.

Caltrans reminds drivers to “Be Work Zone Alert” and to “Slow for the Cone Zone.” 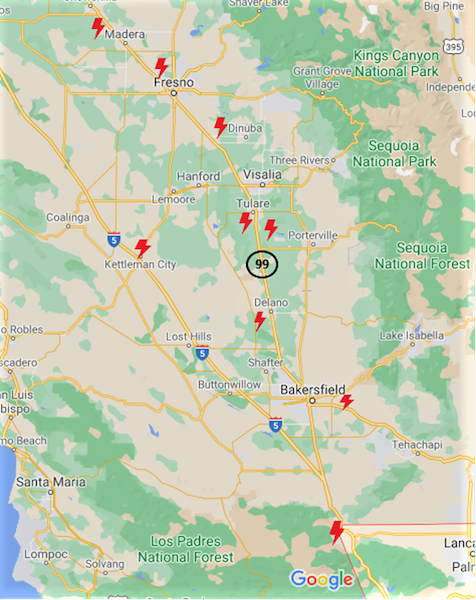 Are you kidding me 22 new ones who approved that Newsum? when are we gonna go out electric in the year 3030 what a bozo show

Apparently a fan of alcohol-based fuels.

This is a start, infra structure needs to be built so that people will have confidence in their future choice of fuel. Yes, in the begging the stations may go unused but over time this will feed on itself. And the technology will improve. Consider that 100 years ago gasoline powered vehicles left urban areas with large containers of fuel on board so they could venture to the next urban fuel station.

How am I a fan of alcohol based fuels I think you're on the wrong story - there's over 260,000 electric vehicles in California and only just put in 22 new quick charge stations -did they have big oil money pay for this in lieu of a multi million dollar fine? Do they really need a database for 22 quick charge stations things are a little askew here - once we get a new governor hopefully a nice intelligent one (not so corrupt/self serving) maybe solar might go on fast track like it should have gone 30 years ago or longer

What is used to create the electricity for those electric cars ?
Electric cars East of the Mississippi run on coal !

Once those coal plants reach the end of their lives, they will be phased out. No one except 3rd world countries like China and India are building new ones. Not cost effective in the US.

True coal power plants will be phased out. After that, where is the electricity going to be produced? No fee for charging? Electric and hybrids already don't contribute much to the system through gas taxes. As a side note. I have a plug in hybrid and solar panels on my home. Plus a big diesel truck for when I go hunting :)

The sooner we phase out fossil fuels, the better for the world. There are many alternatives:

See Dog, did you know that north of the artic circle a lot of transportation runs on dog power!?

How about mandating fast chargers in EVERY gas station in the State.
Has any of the "governing" morons thought about something as SIMPLE as that ? Obviously not : it's too "complicated" for them !

More unfunded government mandates are not the answer.