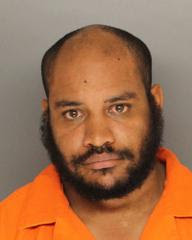 The Santa Barbara County Sheriff’s Office is releasing additional details regarding a stabbing that occurred yesterday, March 9, 2018 at a Vandenberg Village residence in Lompoc. The victim, a 71-year-old male, is in an area hospital recovering from multiple stab wounds. 31-year-old Jacob Salter, was detained at the scene and subsequently arrested. He is booked at the Santa Barbara County Jail on charges of attempted murder.
Sheriff’s detectives with the Criminal Investigations Division are investigating the circumstances surrounding the incident. While it is still early in the investigation, it appears the suspect and the victim both live at the residence. A family member called 9-1-1 at approximately 4:35 p.m. on March 9, 2018 to report the stabbing. When deputies arrived at the home located in the 700 block of Mercury Avenue, they located both the victim and the suspect. The motivation for the attack is still under investigation.
Salter is being held on one million dollars bail and is scheduled to appear in court for his arraignment on March 12, 2018.
Update by Santa Barbara County Sheriff's Office
9:40 p.m., March 9, 2018

The Santa Barbara County Sheriff’s Office is investigating a stabbing that occurred today, March 9, 2018, at approximately 4:35 pm. at a residence in the 700 block of Mercury Avenue in Lompoc. Sheriff’s deputies responded to a report of a stabbing inside the Vandenberg Village home. When deputies arrived, they located a male victim who had been stabbed multiple times. He was airlifted to a hospital with life-threatening injuries. Sheriff’s deputies also detained and arrested a male suspect at the scene.

Due to the active investigation, the identities of the victim and the suspect are not being released at this time. The victim and the suspect are known to each other and no other suspects are believed to be outstanding. Sheriff’s detectives are investigating the circumstances surrounding the incident. No additional information will be released at this time.

700 Block of Mercury in Lompoc Reporting Party freaking out Fight in the back round patient stabbed multiple times....

I thought the way the call went out the victim was a female...

Victim possibly being stabbed while on the phone with edispatch.

One down in the garage suspect detained.

The usage of "elderly" was

I'm sure every little bit

This is tragic, absolutely

3 kids already without a

"And Biden has never heard

Yet again Sac, you're the one

Fondo, even though he's a