David Mata, 39 of Goleta, is accused of driving his Black BMW sedan with a 14-year-old male as a passenger at high rates of speed on Kellogg Ave on Wednesday evening. For unknown reasons his vehicle left the roadway and collided with three cars parked in the Santa Barbara Nissan dealership, its sign, and a fire hydrant causing extensive damage.

Mata was arrested following the collision and transported to Santa Barbara Cottage Hospital with moderate injuries. The child passenger sustained minor injuries and was also transported to the hospital.

Mata is charged with felony counts of driving under the influence of alcohol causing injury, driving with a blood-alcohol great than .08 causing injury with an enhancement for driving with a blood-alcohol content of greater than 0.15 percent, child abuse under conditions likely to cause great bodily injury or death, a misdemeanor driving on a suspended license related to a previous DUI conviction (one in 2013 and another in 2018), and an enhancement for refusing to take a blood-alcohol test.

He is scheduled to be arraigned in court on October 27.

Three parked cars near the Santa Barbara Nissan dealership were severely damaged after a driver crashed his vehicle into them on Wednesday evening.

At 8:45 p.m., the Santa Barbara County Fire Department and AMR ambulance responded to the corner of Kellogg and Hollister Avenues in Old Town Goleta.

Crews determined a male driving northbound on Kellogg Ave at a high rate of speed crashed into three parked cars and the Santa Barbara Nissan sign causing extensive damages to all vehicles.

The driver was self extricated from the vehicle and transported to the hospital in an ambulance with moderate injuries. 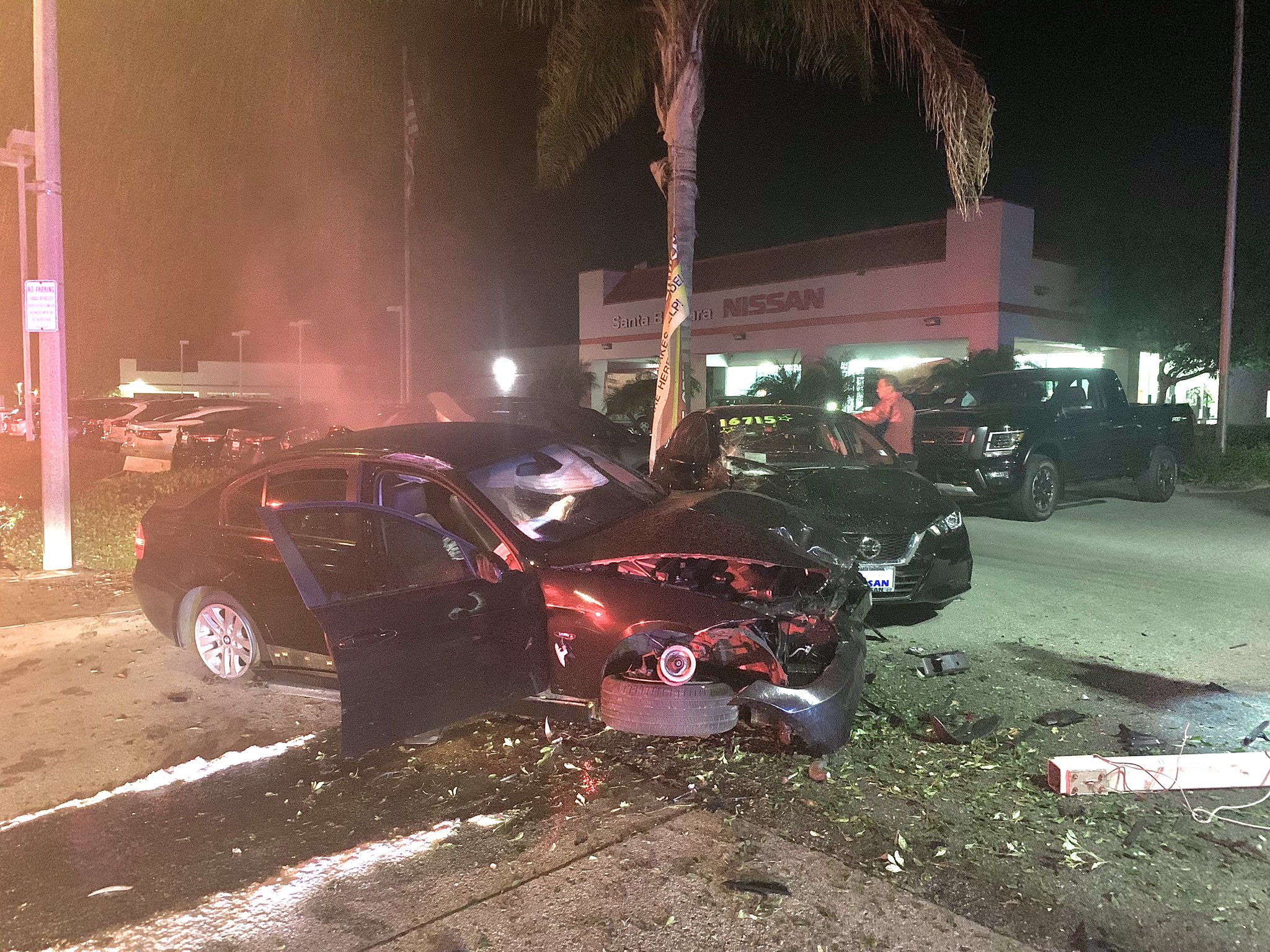 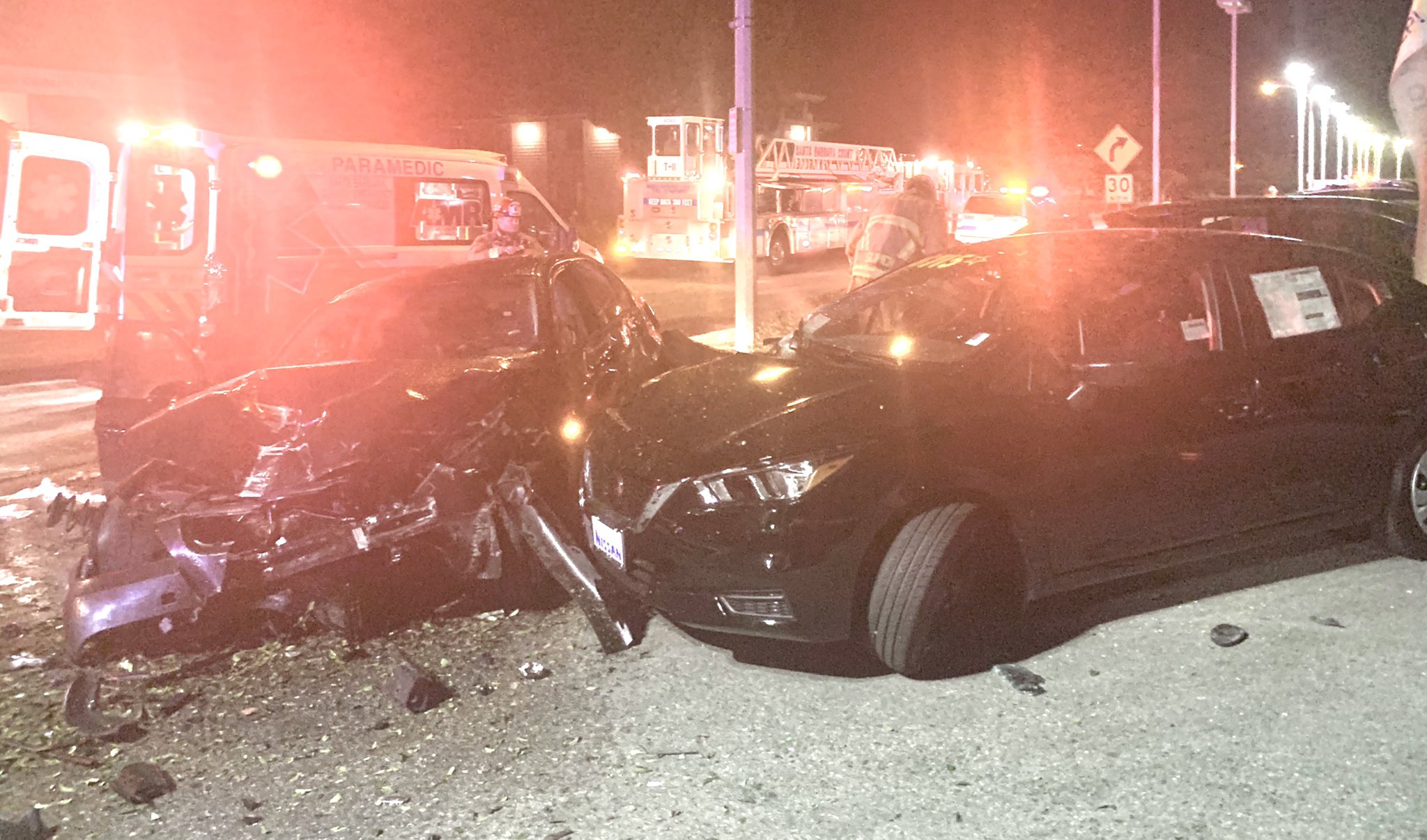 There appears to be some type of car crash in the lot of the Nissan car dealership on Hollister Ave in Old Town Goleta. It looks like the cars involved were on Hollister but collided and ended up in the lot. Significant damage to both sedans and a lot of emergency responders on scene.

Wow the pics on Noozhawk are gnarly! It was only 8:45pm, what the heck?!

The BMW being driven way too fast was northbound on Kellogg Ave. and lost control. There is moderate traffic on that street at that time due to the Drive-In theater.

David Mata owns West Coast Automotive which is also on that stretch of S Kellogg Ave.

For unknown reasons his drunkass speeding vehicle left the roadway!

Hope his license is taken away for good this time and he has to go to an in-facility long-term alcohol treatment program. He could have killed that child. Ridiculous!

Didn’t you read the article? He was driving on a suspended license.

Hope there is a 3rd strike for this that results in jail time and a requirement to go to rehab. Probably his son that was in the car with him, poor kid!

Time to get that court card signed Again.

Can someone explain this statement to me? - "and a special allegation that would preclude him serving any prison sentence in county jail if convicted."

Mountainman4865: some short prison sentences are served in jails. This quote seems to indicate that he would not be eligible to serve a prison sentence in a jail but would have to be sent to a prison.

I believe the special allegation requiring state time is the injury of another person during the course of the driver operating a vehicle while under the influence. Noozhawk says this is the guy's THIRD dui, after obtaining number one in 2013 and number two in 2018.

if he is sentenced to 1-2 years in prison it must be served in a prison, instead of county jail

Misdemeanor?! “Mata is charged with... a misdemeanor driving on a suspended license related to a previous DUI conviction (one in 2013 and another in 2018)...”. What the!

He was charged with that misdemeanor, along with a felony and other misdemeanors.. what is the problem?

Once again a three-time DUI person does massive property damage and injure a 14 year old passenger surely not impressed by a 39 year old now. He may have long lasting trauma and injury. Add meth/cannabis and one is mentally out of control if driving. Proven.
We need an article on the Budget discussion reported today in NP. The County budget reflects cannabis revenue was 12.2 for 2019-20 up from 6.7 million. Almost Double, and during COVID -19, a virus that weakens the immune system when alcohol is added, but not county coffers.
Deficits: Among the few excess budget needs reported were Sheriff, Probation, Parks, --anyone good at connecting the dots? Yes, let's defund those programs, add more legalized drug operators in the wings to offset real infrastructure needs. Keep eating, smoking, rubbing it all over one's body, then drive after a drink--SB Lifestyle? And one more dead homeless man today--out of his mind I am sure, suffering our ignorance and neglect within mental health programs, funded elsewhere as 3rd parties.

Misdemeanor DUI? 3X Loser! --fines for the government do not save lives, nor deter alcoholic/meth/cannabis insanity-- the cause of terrible accidents, cost to government for staff time, and reckless driving. This is also deliberate avoidance of health and safety mandates to be met.

As a member of the National Highway Safety Commission network and having DMV as a client, this is just more frustrating news for DMV and all of us in support of much needed engineering fail-safe advancements for unsafe drugged or reckless driving. If there is a passenger, that person, probably scared or feeling powerless with a bit more sobriety and judgment can push a "panic button" and slowly stop the car, while summoning help-- or let's improve sensing devices mandated in DUI cases for other issues--stroke, heart attack, blackouts ,etc. should a person be unfit to operate the vehicle. Panic button tech already exists with machinery, in banks, etc. New cars should have this mandated so a driver may want to push it to slowly stop vehicle and get help. The County is encouraging more bars, allowing booze at restaurants, and authorizing more legal licenses to grow and distribute pot? Doubles the revenue --great rationalization and waste of money and time in all departments.

WILL he be out on bail and driving some more. October 27th hearing. Bring back the old west and the hanging judges! Oh wait, that is where we are going? Probably fills his BMW with alcohol and not gas!

The way that crash looks, it's lucky that anyone is alive who was involved! THREE DUIs? WOW. Talk about a three time LOSER. Ugh. Some people never learn. 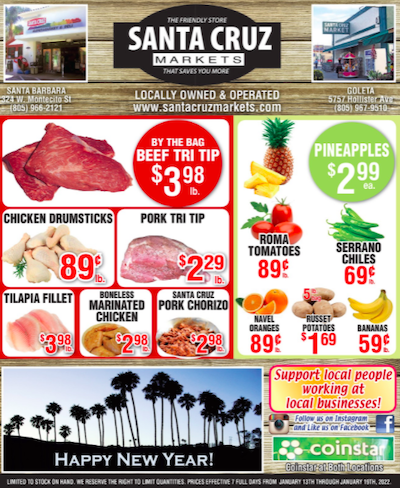 Tucker Carlson fan are you?

Sorry, didn't mean to be a

That isn’t what I heard

Detectives have a challenging

What ever device you are

I had trouble at first. My

One of my clients works for

Interesting that the shooter