The Central Coast Medical Association awarded Philip R Delio, MD, as the 2019 Physician of the Year for Santa Barbara County. The honor is for a physician who has worked to improve the quality of health care, contributed to the education of other physicians, and engaged in community service and other activities outside of medicine. 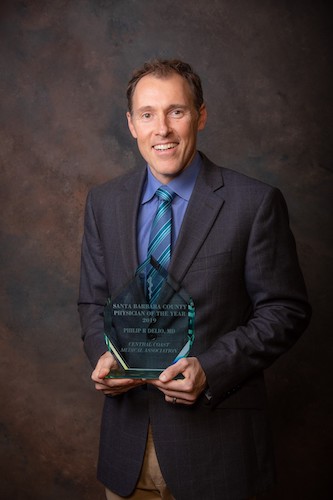 Dr. Andy Gersoff presented the award to Dr. Delio and described him as a physician, healer, teacher, and nurturer. After graduating from Georgetown University School of Medicine, Dr. Delio was interviewed by Dr. Gersoff for an internship at Santa Barbara Cottage Hospital. Dr. Gersoff still has his notes from that interview, and he had written, “A keeper.”

Following his time at Santa Barbara Cottage Hospital, Dr. Delio completed his neurology residency and fellowship at Stanford University before returning to Santa Barbara and joining the Neurology Associates in 2001. Dr. David Frecker stated, “Bringing him into the practice was the best thing I’ve ever done.”

He was Santa Barbara Cottage Hospital’s Internal Medicine Residency Program’s Teach of the Year twice, was instrumental in obtaining Advanced Certification for Comprehensive Stroke Centers by the Joint Commission, and is currently Chief of Staff. He is also the Vice Chair of the Department of Neurology and Medical Director of the Stroke Program.

Besides his work at Santa Barbara Cottage Hospital, Dr. Delio is an adjunct professor in the Department of Psychology with the University of California, Santa Barbara. Dr. Delio served as president of the Santa Barbara County Medical Society in 2010 and was also a delegate to the California Medical Association’s House of Delegates.

Upon receiving his award, Dr. Delio recognized his colleagues who continuously raise the bar on the practice of medicine in our community, and said he tries to emulate the physicians he admires. Dr. Delio also thanked his wife and two daughters for their support and said the award is as much theirs as it is his.

The mission of the Central Coast Medical Association is promoting the science and art of medicine, care and well-being of patients, protection of the public health, and betterment of the medical profession. The 600-physician member organization includes medical doctors of all specialties throughout San Luis Obispo and Santa Barbara counties. For more information, visit www.CCMAHealth.org.
Login to add Comments

I would pay good money to see

Stoker has a very long hard

*That was supposed to be a

Right? Unless you work at a

And though I’m mostly on Team

Anything a person in the