Dudley made the announcement Monday afternoon claims the "wildfire protection" company and its owner, James "Jim" Moseley, made false and misleading advertising claims about the effectiveness, environmental impact, and non-toxicity of its heavily marketed wildfire protection product, "SPF 3000 Clear Spray."

Dudley is seeking civil penalties of at least $5,000,000 in restitution from Moseley and Sunseeker Enterprises Inc., which does business as Sun FireDefense, for harmed consumers and a permanent injunction.

Sun FireDefense markets the "SPF 3000 Clear Spray" product as a clear coating that can be applied to the exterior of a home to prevent it from catching fire and burning down, particularly in a wildfire. Their advertisements claim it “provides protection against heat and embers up to 3000 degrees Fahrenheit,” is “effective for 5+ years after a single application,” was developed “through collaboration with NASA and the U.S. Forest Service,” is “non-toxic to humans or animals,” and uses “[t]he best eco-friendly fire protection materials.” Dudley claims these are false and misleading claims.

In a statement to edhat, Moseley said his products work and although there is nothing that is fireproof, his products have been tested by multiple agencies and witnessed by seasoned fire officials. "We've helped save homes [...] and haven't had any complaints," he said.

Moseley stated he has been and will continue to cooperate with the District Attorney as he also wants what is best for the consumer. "This is a huge responsibility for a company to do what we’re doing," he said while providing a video clip on the Discovery Channel showcasing a test of SPF3000 Clear Spray and a fire blanket that was designed for firefighters performed by Wildland Firefighters. 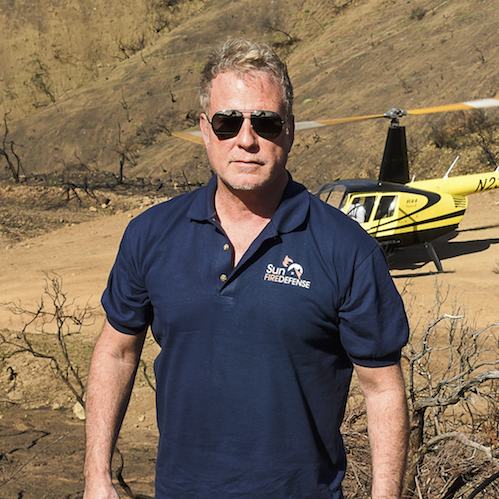 Additionally, Moseley provided copies of testing documents stating his products have a Class A rating, the most stringent rating available for building materials by the National Fire Protection Association.

A 2018 report from the accredited Guardian Fire Testing Laboratories tested the SPF3000 Clear Spray to evaluate the ability of the product to limit the surface spread of flame when over 30 minutes, also known as the 30 min Tunnel Test. The product met the conditions to gain approval. However, according to the report, "This standard is used to measure and describe the response of materials, products or assemblies to heat and flame under controlled laboratory conditions. It should not alone be used for fire hazard or fire risk assessment of the materials, products or assemblies under actual fire conditions."

Another report was conducted in 2017 by the U.S. Department of Energy who tested the same spray on electrically-caused fires on wood telephone poles. The report concluded that while the treatment will not prevent electrically-caused pole fires, "it may limit the damage to the structure in some cases."

Dudley also announced Los Angeles City Attorney Mike Feuer has joined Santa Barbara County in the filing of these charges. She explained that several months ago she saw a television commercial about this product and felt it was a predatory company trying to take advantage of our communities’ fear of wildfires. She then contacted consumer protection prosecutor, Deputy District Attorney Christopher Dalbey, who immediately began the investigation and ultimate prosecution.

“Our consumers have a right to accurate marketing information, a right that becomes all the more critical when making crucial and life-saving decisions about how to defend their homes and loved ones. Given the staggering danger posed by wildfires, it is critical that California consumers receive truthful, accurate, and scientifically-validated information about fire prevention and protection products.  Lives, homes, and our public’s safety depend on it.  If consumers falsely believe that their homes are protected from wildfires, when in fact their homes are not, those consumers could delay evacuation, placing their lives, the lives of their loved ones, and the lives of First Responders at great risk," said Dudley.

Los Angeles City Attorney Mike Feuer stated, “In the wake of the devastating wildfires that have plagued the state recently, unscrupulous companies will inevitably surface and attempt to take advantage of Californians’ legitimate safety fears and fears of losing their homes and cherished possessions. Consumers should carefully evaluate the advertising claims made regarding so-called ‘fire defense’ products.”

KEYT News interviewed Sun FireDefense's consultant Will Spyrison in 2018 while they applied their SPF3000 product to a local home. “The likely hood of the house burning down is pretty minimal. If the house were to take flames, it will get some black on it but you can take a power washer and wash it off, but it is a lot better than having your house totally destroyed,” said Spyrison during the interview. The homeowner asked not to be identified.

The next steps for tackling the mess of oil leaking onto Summerland beach are moving forward, with barge and contractors set to arrive here in June/July 2020.

Roger has the scanner reports. "Theft of car keys from a customer at Target in the 3800 Block of State Street, the thief was out in the parking lot looking for the victim's vehicle."

[Update]: One person died, three sustained injuries, and one driver was arrested for DUI in a traffic collision on Highway 154 at Painted Cave Road Thursday evening.

Santa Barbara Police arrested a woman who attempted to break-in to an outside supply area of the police department.

Local readers have put together their own coronavirus graphics to track the number of cases in Santa Barbara County.

A recent raid and felony charges give planning commissioners pause on approving a zoning permit for a large cannabis operation near Lompoc.