Dispatches from a Disaster: Part II

Scroll through the panoramic photo taken from the east bank of Montecito Creek, just below the bridge at East Valley Road, after the debris flow came through on Jan. 9. The flow hit hardest on the west bank, shown here as bare land where entire homes were swept away. (Photo: Marcus Lopez)

The worst horror of the catastrophic 1/9 debris flow struck on the west bank of Montecito Creek, just below the bridge at East Valley Road, where 11 people were swept away to their deaths.

Marcus Lopez, who lives across the creek, will never forget the moment he saw the massive wave of black mud and debris approaching.

“As soon as it hit the bridge, it launched; and then it came down with a curl like a swell and went up again,” he said. “You could only do one thing; get the hell away. I was running for my life. It wasn’t only mud; it was houses, walls and electrical lines, and it smelled like sulfur.”

On a recent weekend, Lopez invited Tom Dunne, a UCSB professor of geomorphology, to survey the mudlines on the trees on his property. Dunne is part of a UCSB team that has been hiking the creeks of Montecito, trying to reconstruct the deadly flow. Twenty-three people died on Jan. 9 and entire neighborhoods were destroyed, including the 1200 block of East Valley. 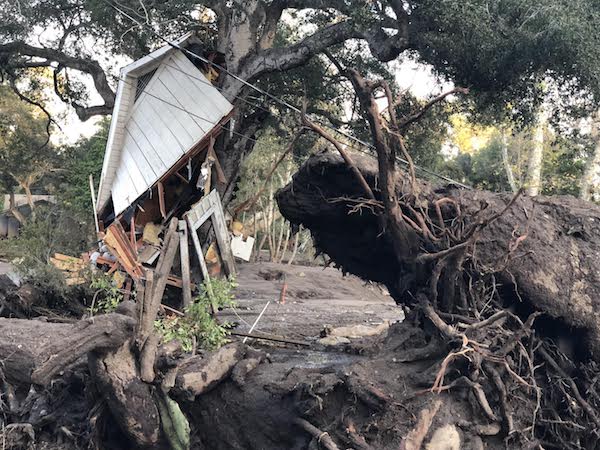 On the west bank of Montecito Creek below the bridge at East Valley Road, seven homes, including this one belonging to Larry Lopez, were destroyed. The Lopez family have been landowners on both sides of the creek since the mid-1800s, in a community historically known as Spanishtown (Photo by Mike Eliason, Santa Barbara County Fire Department)

Dunne moved from tree to tree on Lopez’ land, propping a surveying rod against the trunks like a giant ruler. He called out the height of the mudlines, 14 and 15 feet high, while a student recorded the elevations with GPS equipment.

The surveys, Dunne said, will help the team describe the depth, volume and velocity of the live flow as it surged down the canyons to the ocean. (By contrast, the FEMA recovery maps that are due out on June 11 will show flood water elevations based on the mud deposits that were left behind.)

The debris flow likely gained height as it clogged and then overtopped the East Valley bridge, Dunne said. Montecito Creek narrows as it drops below the bridge, and preliminary data show that the debris flow was traveling 25 miles per hour here. It overflowed both banks and spread 100 yards wide.

Below the bridge, the west bank of the creek is lower than the east bank. A bend in the west bank would have caused the flow to rise and accelerate, dumping more mud and debris over the banks, Dunne said. In addition, a back channel just to the west of the creek would have disgorged across the main flow through a large culvert on East Valley Road, making homes there even more vulnerable.

It’s fortunate that on flatter land above the bridge, the flow dropped a field full of boulders at Meadow Lane, Dunne said; if they had been carried farther downstream, they would have done more damage.

At the edge of the creek, Dunne and Lopez examined a large tree with an untouched, unmuddied barrel sitting at the base of the trunk on the downstream side.

“I never saw that on a debris flow before,” Dunne said. “The mud was whistling past so fast, at 25 miles per hour, that it couldn’t drain into this space. You could have poked your head down there and you’d be breathing air. We see this all the way down the creek.”

As for the smell that Lopez reported, Dunne said debris flows commonly give off a boggy scent of wet soil with decaying vegetation in it. 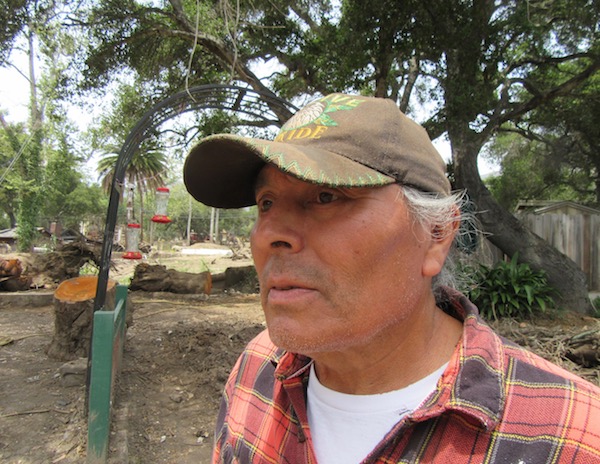 “I was running for my life,” said Marcus Lopez, who survived the debris flow as it surged over the East Valley bridge at Montecito Creek on Jan. 9. The Lopez family has owned land below the bridge for generations (Photo by Melinda Burns)

On Jan. 9, Lopez said, a vacant house belonging to the Montecito Fire Protection District house, originally built as a saloon in the 1800s, slammed into his sister’s house and tore it off its foundations, moving it 25 feet. It, in turn, demolished an old warehouse.

On the west bank, a house belonging to Lopez’ brother, Larry, was obliterated; luckily, he had decided to spend the night on the east bank. The family has owned land near the bridge since the mid-1800s, when it was part of a historic community known as Spanishtown.

Next door and upstream on Jan. 9, “We heard the roaring and rolling – you can’t even really describe the sound,” Leslie Muller, a district dispatcher, said. A torrent of mud rushed under her house, one of three district properties near the bridge, but a tree stump and a fallen power pole diverted the brunt of the flow. Muller, her husband and teenage daughter escaped through the destroyed back wall of their home. Fashioning a plank from pieces of debris, they made it to the road and higher ground, carrying their dog and a parrot.

“It took three to five minutes, but it seemed like an eternity,” Muller said. “Somehow, things fell just right, and it was not our day. There’s somebody much bigger than I, looking out for my family.”

After they were rescued, the couple went to work, fielding 9-1-1 calls. 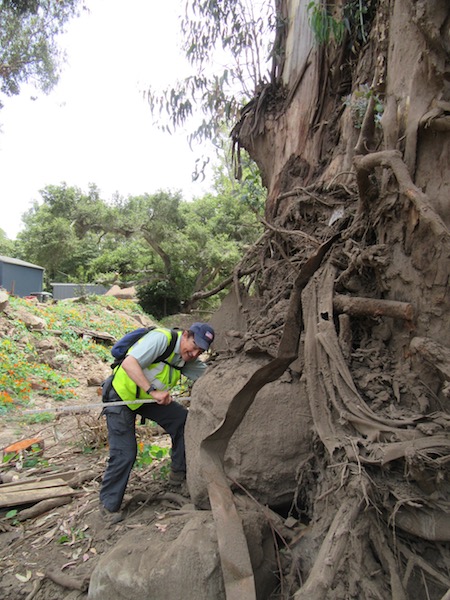 Tom Dunne, a professor of geomorphology at UCSB, is part of a team studying the Jan. 9 debris flow. Here, he is measuring the width of a boulder on Montecito Creek, near the East Valley bridge. The measurements will help scientists determine how boulders of this size and weight can be transported downstream (Photo by Melinda Burns)

Downstream from the Lopez family compound, Mark Karpeles ran to a third-story window in the tower of his stucco mansion to see flames shooting up from a gas line explosion to the northeast (the line broke when the flow jumped the banks of San Ysidro Creek).

“And then all of a sudden, we heard a rumbling sound,” Karpeles said. In the eerie orange glow of the fire, “almost like daytime on Mars,” he said, “I saw a wall of mud, trees and boulders coming right at us, and it was coming fast. It was 20 feet above the banks. I watched it for a second or two and turned my back, I was so scared. I thought we were going to be dead. I was expecting to hear the building falling apart.”

The mansion didn’t collapse; it was built on a partially buried basement of cinderblock. Karpeles turned around to find that the wall of mud had spread out and was eight feet deep, snapping trees as it surged along.

Amid the chaos, he remembered his neighbors on the west bank.

“I could see all the houses missing, and I was in shock,” he said.

Karpeles has cleaned up his property since Jan. 9, but he said it cost him $1,000 per truckload to cart away 287 truckloads of mud and debris, or $287,000. With no such resources, the Lopez family is counting on public donations from GoFundMe, an online crowdfunding platform, and a brigade of friends to help sort and haul away the debris, which includes tile, insulation and sheetrock from destroyed homes.

“Now, the difficult thing is that six months later, the mud has hardened like concrete,” Lopez said.

Dunne will give a presentation on the UCSB team’s research at the Karpeles Manuscript Library in Santa Barbara at 2 p.m. on July 21. 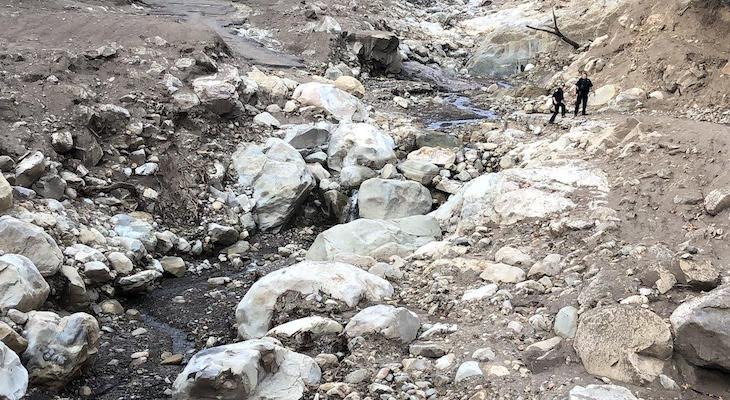