Dispatches from a Disaster: Part I

Tom Dunne has tramped all over the enormous debris flows, dozens of miles long, that were triggered in May, 1980, during a volcanic eruption and avalanche on Mt. St. Helens in Washington.

But he has never seen anything like what happened in Montecito on Jan. 9, when a catastrophic debris flow was triggered not by an eruption or landslide, but by a deluge that cut hundreds of thousands of narrow channels into the scorched mountain slopes.

How did that rainfall – a few intense bursts within a matter of minutes, beginning at 3:34 a.m. – generate enough mud to launch giant boulders down the narrow canyons, across the valley floor and all the way to the beach?

“That’s the thing I’m trying to understand – the unfathomable intensity of the event,” said Dunne, a UCSB professor of geomorphology, or the science of the physical landscape. “In terms of damage to an urban area, I’ve only seen something like this in Japan, where you’re living on the side of active volcanoes.”

The team is studying the physics of the debris flow, the historical record of such flows in Montecito and the rate of accumulation of the boulders in the canyons above the community. It’s an ambitious, long-range project; the scientists hope to advance the public’s understanding of what to expect after wildfires.

“I’ve never been close to something that happened so recently,” Jerolmack told an audience at UCSB’s Kavli Institute for Theoretical Physics in March. “The evidence is being erased day by day.

“We’re trying to do this forensic science of figuring out how big and how fast this flow was so that we can understand how it was made … We don’t have direct observations; it happened at night.”

In Montecito today, Jerolmack said, “It will be harder for something like this to happen again.” But, he cautioned, “There are some parts of these canyons where debris flows are just sitting there and never made it all the way down. So there are some boulders there, but not nearly as many as there were before.”

Keller and his students are mapping the boulders in the canyons above Montecito in order to measure the rate at which they pile up there – how rapidly the “gun” is loaded. It may take centuries for enough boulders to roll down the slopes and fill up these canyons, Keller said; no one really knows for sure.

Montecito and Santa Barbara were built on top of prehistoric debris flows, but scientists know the dates of only two of them; the flows at what is now Rocky Nook Park (1,000 years ago) and Mission Ridge (125,000 years ago). Much more work needs to be done before the overall frequency can be determined, Keller said.

In the short term, with little vegetation growing back in the burn scar of the Thomas Fire, the largest fire in California history, the Carpinteria Valley and Montecito and many communities in Ventura County are at risk of a debris flow or a debris-laden flood in heavy rains next winter.

“To the east of us, there are many canyons that burned and did not receive anywhere near the same intensive rainfall,” Dunne said. “They could unleash debris flows if they experienced a squall line like the one here.” 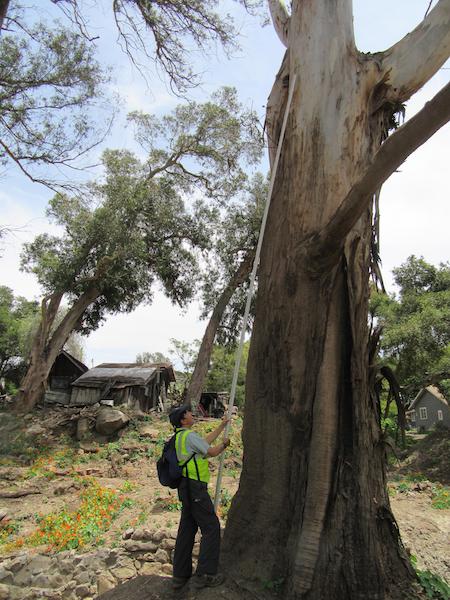 Tom Dunne, a UCSB professor of geomorphology, uses a surveying rod to measure the “super-elevations” where the debris flow ran up the trunks of trees along the east bank of Montecito Creek. From these mudlines, Dunne can calculate the peak velocities of the flow. (Photo by Melinda Burns)

Twenty-three people were killed on Jan. 9, and 470 structures were damaged or destroyed. It was several weeks before Dunne could get permission from the U.S. Forest Service to hike up into the charred canyons above Montecito. He wanted to see up close some of the hundreds of thousands of narrow channels, or rills, that the intense rainfall cut into the bare slopes on Jan. 9. If he could measure them, he could estimate how much mud they generated.

The rills – between 4 and 12 inches deep and spaced half-an-inch to an inch apart –formed very quickly in the deluge, Dunne and Jerolmack believe.

“The hillside went from being barren to being dissected by thousands of these rills,” Jerolmack said. “The rainfall eroded them, and these rills became like firehoses of mud shooting straight into the channels.”

The resulting slurry of mud had the consistency of honey, scientists say; it buoyed up piles of boulders that were stacked in the canyons and propelled them downstream, also in a matter of minutes.

“It takes a lot of power to move a boulder down a creek,” Dunne said. “No one has yet been able to explain the mechanism that produced mud at such a rate in this kind of event. If I understood it, I could predict the kinds of rainstorms that would produce other debris flows. But I don’t know whether I’ll be successful.

“What we know from other debris flow events is that the mechanism of initiation is critical to determining all the other things – how big the peak flow rate was, and how much warning time you have.”

There wasn’t much time on Jan. 9. Based on anecdotal accounts, the flow reached the sleeping community of Montecito sometime between 3:40 and 3:47 a.m., with the boulders bobbing and knocking against each other up front – a deadly battering ram.

The boulders resisted the mudflow behind them and made it deeper, intensifying the hazard, Dunne said. The data, he said, will show whether significantly more of the flow would have been contained in the creek channels without this levee of boulders in front.

Among other seemingly impossible tasks, Dunne and his wife, Joan, are photographing a boulder from enough angles to assemble a 3-D picture of it. Then they will calculate the volume and weight of the boulder and figure out how much mud it would take to pick it up. They learned the technique from students.

Dunne had only 24 hours in February to study the burned slopes before it rained again and the rills began to collapse. Now, he said, he is left to pore over high-resolution aerial photographs of the mountainside, taken shortly after Jan. 9.

“That set me back weeks or months,” he said. “Things that we could have measured quickly in the field, we have to figure out a way to get from photographs.” 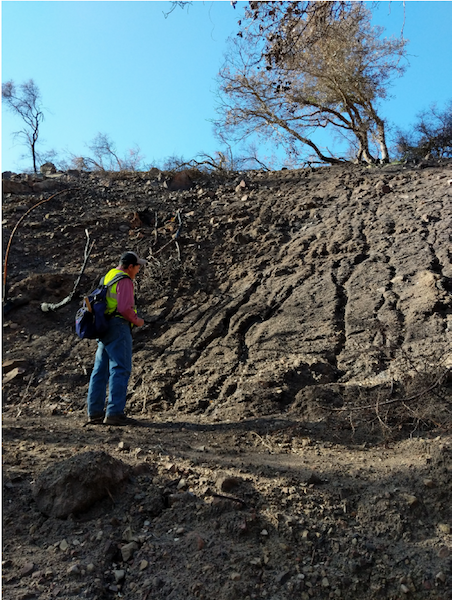 During an intense rainfall on Jan. 9, hundreds of thousands of narrow channels, or rills, pumped enough mud into the canyons above Montecito to trigger a catastrophic debris flow, scientists say. Tom Dunne, a geomorphologist, is part of a UCSB team studying the disaster. He is shown here in a tributary of San Ysidro Creek (Photo by Douglas Jerolmack)

In recent months, Dunne and his students have hiked Hot Springs, Cold Springs, Montecito, Oak and San Ysidro creeks and their tributaries from East Camino Cielo to the ocean, lugging survey equipment to record the elevations of mudlines on trees and buildings – hundreds of them.

Amid the massive cleanup of Montecito, the evidence is fast disappearing. “I see all this data going away,” Dunne said.

A public request in April for photos, videos and audio recordings of the flow yielded few results. So Dunne’s crew must piece together the data from the fragments that remain. They record the elevation of mudlines that haven’t yet been power-washed off of trees at the outside margins of the flow, where it was lowest and slowest, and nearer the main channel, where it ran deepest and fastest. The “super-elevations” – mudlines where the flow smacked into and ran up tree trunks as it surged downstream – will reveal the greatest velocities of the flow.

When the data is analyzed, the UCSB team will be able to describe the depth, volume and velocity of the live debris flow as it raced down the canyons and across the valley floor. By contrast, the FEMA recovery map, due to be released on June 11, will show the topography of the mud deposits that were left behind.

Preliminary observations suggest that the flow was traveling fastest – about 27 miles per hour – in the upper reaches of San Ysidro Creek, Dunne said. (Anecdotally, residents report two surges on San Ysidro.) The deepest flow recorded to date – more than 20 feet deep – was at the Cold Springs trailhead on East Mountain Drive.

Dunne hopes to finish surveying the mudlines in the lower reaches of Buena Vista, Romero and Toro creeks in the next few weeks. He and his students will survey Santa Monica and Carpinteria creeks in the Carpinteria Valley this summer.

In September, Dunne will travel to an observatory in Yunan, China where scientists can watch a debris flow triggered by a landslide every afternoon during the monsoon season. For 40 years, the Chinese have been monitoring a large number of flows of different sizes here. Will they have any insights into how an ocean of mud came down on Montecito?

“I’m going to talk to Chinese scientists who are actively research these processes, but I can’t tell you how I’m going to solve the problem,” Dunne said. “Science usually has to admit uncertainty.”

Tomorrow, in Dispatches Part II, Dunne and survivors compare notes on the deadliest stretch of the 1/9 debris flow.

Dunne will give a presentation on the UCSB team’s research at the Karpeles Manuscript Library in Santa Barbara at 2 p.m. on July 21. 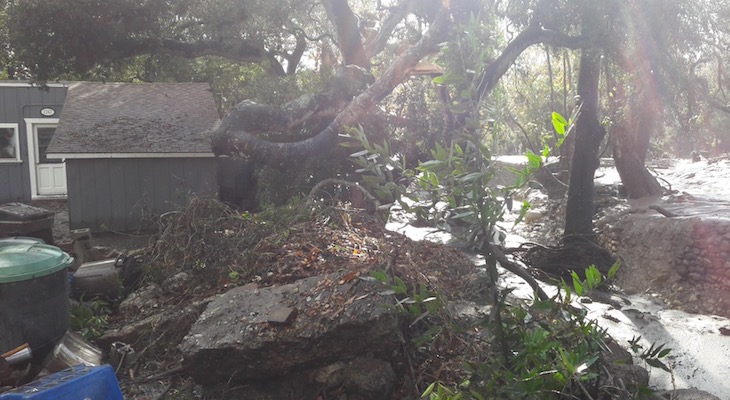 Toggle Comments (Show)
Dispatches from a Disaster: Part I
I went up Romero in February. Amazing. Major rejiggering of the landscape. The bridge up 0.5 mile from the red gate is completely gone. Only the abutments remain. An I-beam from the bridge washed down canyon most of the way to the road and ended up wrapped around a tree like a "U". If the steel was encased in concrete, it was stripped clean. I guess the cross section is 1/2" x 8" x 16". The ~12" tree is fine. I would love it if the professors would give talks about the geology and physics of what happened. Alluvial fans below desert canyons provide a visual of the power unleashed by rains. Check them out sometime on a drive cross country. All mountains will eventually wash into the sea.
Dispatches from a Disaster: Part I
I don't see any mention of the water lines from Gibraltar and Lake Casitas. From all of the initial scientific analysis I read, the millions of gallons of water released by the rupture of those lines played a significant role in the debris flow. Something I hope never happens again!
Dispatches from a Disaster: Part I
It is unfortunate that these experts were not allowed access sooner, while the evidence was still fresh. Their task is as huge as the debris flows themselves. We are fortunate to have such expertise working on this important project and I look forward to learning more.
Dispatches from a Disaster: Part I
"Preliminary observations suggest that the flow was traveling fastest – about 27 miles per hour – in the upper reaches of San Ysidro Creek, Dunne said. (Anecdotally, residents report two surges on San Ysidro.) The deepest flow recorded to date – more than 20 feet deep – was at the Cold Springs trailhead on East Mountain Drive."
Please Login or Register to comment on this.

I believe it was in Italy

I hear that the self-employed

The guy with the hole in his

The guy with the hole in his

My grandfather survived the

Thanks for your open honesty.

It IS IV... Possible that