Dimensions of a Monumental Cleanup

Montecito Mudslide
byMelinda Burns
2 Comments
Reads 3445
There’s a beach at Goleta Beach County Park because the county is dumping mud there from Montecito roads and creeks, part of cleanup operations in the wake of the catastrophic debris flow of Jan. 9. But the ocean is unsafe for swimming and surfing (Photos: Melinda Burns)

When the county dumps tons of mud from the catastrophic debris flow of Jan. 9 on the shores of Goleta and Carpinteria, is that “beach nourishment”?

Yes, and it’s a rare opportunity for the sand-starved coast, said Jim Bailard, a Carpinteria resident and technical advisor for the Beach Erosion Authority for Clean Oceans and Nourishment (BEACON), a joint powers agency of elected officials from Ventura and Santa Barbara counties.

“It’s actually a good thing, provided it’s being done responsibly,” Bailard said. “Basically, this is sediment that in the past would have gone down to the beach. That’s how you make beach sand. You place the sand at one point on the beach and the waves move it down the coast.”

Wave energy quickly separates out the mud from the sand and carries the mud offshore, Bailard said.

“You see lots of new sand as the beach has built out substantially,” he said. 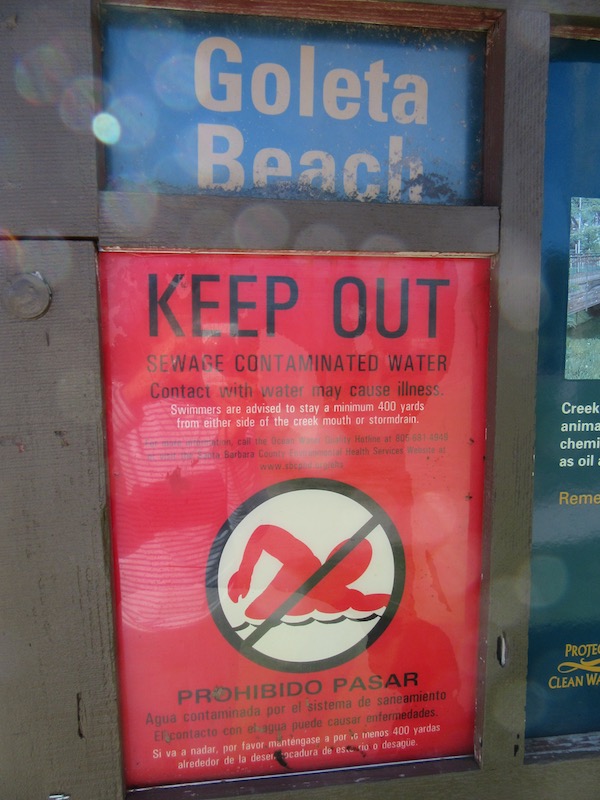 But even as the sand comes back, the water remains unsafe for swimming. A month after the Jan. 9 storm flushed a lot of dirty creek water into the ocean, the surf zone is testing clean again along much of the South Coast – two big exceptions being Goleta Beach and Carpinteria Beach at the end of Ash Avenue, where, as of Feb. 5, bacterial levels remained high.

Goleta Mayor Paula Perotte said she’s fielded hundreds of complaints from residents who don’t like the ban on swimming or the dump truck traffic at their local beach. Goleta Beach is a county park. The mayor said she was first notified of the dumping operation by a resident who saw it on KEYT news.

“We recognize that this was an emergency and of course we want to help,” Perotte said. “And though Goleta Beach is not in our jurisdiction, it’s our only beach for recreation. This isn’t like anything that’s happened before. So Goleta residents are asking, Will there be long-term effects? Might there be other locations that can share the impacts?”

Larry Fay, county director of Environmental Health Services, said that once the dumping stops, the high bacterial levels in the surf at Goleta and Carpinteria beaches will come down.

“I would say it will be a rapid recovery – weeks rather than months – once you stop putting new sediment on the beach,” he said.

Just last year, Fay noted, the county issued health warnings at beaches from Jalama to Carpinteria after a four-inch rainfall on Feb. 18, then lifted most of warnings by Feb. 27.

In conditions of high winds and winter swells, there can be an upwelling of the mud on the ocean floor and a return of elevated bacterial levels, Fay said, but these episodes are short and infrequent.

“It stabilizes pretty quickly when the weather and tides change,” he said.

Dumping mud at Goleta Beach is nothing new. Since 1995, records show, the county has trucked or piped in more than one million cubic yards of mud and sand, dredging it out of Goleta Slough and Santa Barbara Harbor – all part of a Sisyphean effort to restore the sandy beach at the county’s most popular park.

“The beach work will be wrapping up around that date,” Fayram said. “The roads have been mostly cleaned. There’s a lot of material on private property, but that’s not permitted to go there.”

To date, according to the Central Coast Regional Water Quality Control Board, a state agency, the mud that is going to Goleta and Carpinteria beaches complies with state standards with respect to silt content and toxic chemicals. Testing is performed every two or three days.

“The material, based on the information we have, is good for beach nourishment, but we have limited samples up to this point,” said Phil Hammer, a senior environmental scientist for the state board.

Meanwhile, UCSB scientists are testing bacterial DNA in the mud and the surf at Goleta Beach to determine whether the source of the bacteria is human, rather than from horses, dogs or birds.

The Montecito cleanup is a gargantuan task. The debris flow is believed to have left behind more than two million cubic yards of mud, boulders, mangled cars and pieces of houses in the small community, largely along Montecito and San Ysidro creeks. (By comparison, Hurricane Maria, one of the worst natural disasters in the Caribbean, left strewn an estimated one million cubic yards of trash and debris in the U.S. Virgin Islands, a territory of 160 square miles, last September.)

In the foothills above Montecito and Carpinteria, the U.S. Army Corps has cleared out nearly half of an estimated 377,000 cubic yards of mud and boulders from debris basins on local creeks, Fayram said. These truckloads are going to a reclamation site in Buellton. The work is expected to be finished by March 15.

In addition, county crews are excavating sections of creeks plugged with mud and debris at eight locations in Montecito, Fayram said. The Corps will haul away the mud and rocks to Buellton and Santa Paula, he said.

“It’s so much work, and we have to prioritize what’s important,” Fayram said. “At some point soon, we’ll be done, and we’ll stand by. If we get another storm, we’re reset to having to start all over again.”

By some estimates, fully half of the Montecito cleanup will fall to private property owners.

“I think it’s going to go on for many years, by the time this stuff has been dealt with.” Fayram said. “Some people may well never remove all the material.”

To Bailard’s way of thinking, the beach is where much of it belongs. Why is the Corps trucking rocks from the debris basins to Buellton? he wants to know. Baseball-sized rocks called “cobbles” form a base layer that help protects beaches from erosion during winter storms, Bailard said. In heavy flood events, these rocks would normally come down the creeks to the coast.

“It’s a public resource,” Bailard said. “To cart it away to landfills is really doing a disservice to the coastline. We’re going to lose our beach as sea level rises, and that’s what this is all about.”

Toggle Comments (Show)
Dimensions of a Monumental Cleanup
This is a good article except for the erroneous and unfortunately misleading beginning statement - "There’s a beach at Goleta Beach County Park because the county is dumping mud there from Montecito roads and creeks...". As a frequent observer of the Goleta Beach situation, I will say that the sand started to return to the beach this last Fall due to the coastal processes local to the area, plus it got a boost from the County dumping Goleta Slough sediment there in November.
Dimensions of a Monumental Cleanup
Excellent article - Thanks!
Please Login or Register to comment on this.

And what else do you want to

Twisted but sensible to me.

all of my kids go there and

Glad to see we are helping

i look out my window and this

Just WATCH me swallow this

Here is a short summary of