Deputies conducted a traffic enforcement stop that has resulted in the seizure of 92 firearms and over 90 grams of methamphetamine. At approximately 12:43 a.m. on Saturday, December 5, 2020, deputies in the Isla Vista area saw a Dodge Charger Hellcat peel out in front of pedestrians near Camino Del Sur. Deputies conducted a traffic enforcement stop of the vehicle in the area of Los Carneros and Hollister.

The case was then forwarded to Sheriff’s detectives who conducted a follow-up investigation including authoring a warrant for Dodge’s residence. Detectives served the warrant on Saturday, December 5, 2020 at an address on Vega Drive in Goleta. As a result of the search, they seized 70 additional firearms and approximately 50 containers of ammunition and magazines. This investigation remains ongoing. 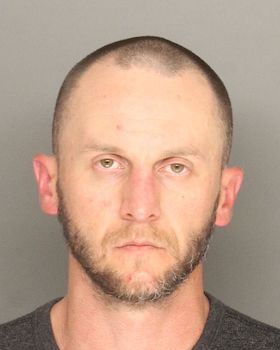 That's a lot of guns and meth. Thank you to SBSO for putting this menace behind bars!

Seems to me just another 2d Amendment fan.

CFreak: The 90 grams of meth are a lot less dangerous to the public health and safety than are the 22 firearms he was toting about.

RHS: I respectfully disagree. 90 grams of meth are absolutely a threat to public health and safety. For you to suggest otherwise is extremely naïve and irresponsible. Have you ever known anyone addicted to meth? I have, and they're insane. The lack of sleep and constant stimulation of neurotransmitter release in the brain actually makes these people psychotic and incredibly violent. In my experience, a meth fueled human is far more of a threat than a loaded firearm.

Gun worshipers can justify just about anything.

Now that I think about it, I've never heard of anyone getting hit or killed by a stray line of meth.

To Chemicalsuperfreak.
It's naive and irresponsible to put information out into the world that is not correct. Unless it's your intent, that kind of hype can harm others and deviate from the real issues.

Superfreak, you're a scientist s you should be able to apply a more rigorous line of thinking in these conversations. RHS didn't say the 90 grams of meth was not a threat to public health, RHS said that the 22 firearms he was likely illegally selling was a greater threat. And, more of a threat than a loaded forearm? Well, duh. Context, Super, context. A loaded firearm in a vault at the bottom of the sea is a threat to no one. Twenty two weapons being sold likely illegally, by a drug dealer, likely to others who are in the game slinging meth, or looking to otherwise use those weapons illegally is probably more of a threat than drugs.

Damn this guy seems like a ticking time bomb

Buying a used or new handgun in CA is next to impossible right now.... I need the Sheriff's Dept to have a yard sale!

Bro just buy a machete. That's what I have.

Anyone think this guy isn't total f-up right now? And he needed to be arrested as soon as possible? And...oh, but wait. What if there weren't officers out patrolling? Cut the officers' funding so we could have more social workers instead? And then he keeps rolling around selling drugs and making money, never getting caught because there's NO ONE OUT THERE THAT HAS THE TRAINING AND ABILITY TO HANDLE THAT JOB. Hmm...

How come Newscum didnt book and release him? -He seems like a nice guy

I see what you did with the Governor's name. Very clever. Not.

when one gun just isnt enough

How many wrenches does your mechanic have? When people realize there a tool and the real problem is mostly mental health issues. When guns are gone it will be knives, cars, buses or trucks. Oh wait that’s already happening in Europe where guns are outlawed!!!

Europe, where the death toll is much smaller. If you think firearms are illegal there, you are badly misinformed. However, they are regulated in a sane fashion, as opposed to the idiocy allowed here.

How many wrenches do you need per nut?

SAIL 380--yeah, totally, other than the fact that you're wrong. Europe has lower homicide rates than we do--it's actually a lot harder to kill ten or fifteen people with a knife.

If the Sheriffs caught this much at a traffic stop imagine how much they would get with solid police work using informants, undercover stings, and surveillance. Keep pulling people over SBSO, you’ll get to that level someday

Is it the same family? I'm sure you're correct. Not good, not good at all. Interesting Yelp review from 2016, led me to this:

Oh, whaddya know, Kyle is cited in the article. And the owner wants to pass off the the 2006 issues on an employee -- who happened to be a county probation officer at the time. But surprise, there were some record-keeping and inventory issues. Whew, stinky all around.

Yes, Kyle Dodge is from the same family. His father own’s Dodge City Shooting Shooters Supply. They are not allowed to sell FIREARMS!

If he hadn't given in to his silly machismo and not peeled out, he would've gotten away with whatever for another few days, weeks or years. HA ha! (Nelson laugh) Really glad he got busted. Thanks, Sheriff's dept.

Anybody hearing those dueling banjos....?

That is a lot of firearms for one person.

Hope investigators can trace his customers.

They are not allowed to sell what?

Looks like Meth wasn’t the only thing this dirtbag was selling. Don’t anyone take away our guns though...This is Merica and our precious 2nd Amendment must be protected at all costs. Eye roll.

I wonder if the meth maybe his bigger issue. Would not be surprised if many of the items he had in his possession were legal- "grandfathered in" so to speak. Just cuz they charged him doesn't mean it will all stick....

Our own little mass shooting event in the making. I wonder how many people like this are out there and are one incident away from changing this community forever. Our brains have invented these tools but can't figure out how to keep us safe from them. DNA about 98% the same as a chimpanzee sounds about right, no disrespect meant to the chimpanzees.

One incident away? I guess the other mass murders we’ve had don’t count. Is that because in only one, they used guns on most of the the victims? You should spend some time educating yourself at a gun range some time. There usually one of the friendliest places around. This is a criminal and 99.9% of gun owners do not tolerate this type of behavior.

Are you laughing while you type? I don't know many that would be able to type such bold faced lies with a straight face.

Nice job SBSO! Keep keeping the community safe. Glad this guy cant hurt anybody now-- wonder what was he planning with that many firearms? Good thing they aren't his anymore.

Let's all hope that is the case.

His biggest mistake was driving the Hellcat! If he'd been driving a Prius he likely wouldn't have been so noticeable.

Surfer in Distress at Rincon

Next, the baker's dozen of

Should I take this downvote

Making every effort to find

A great (and fascinating!)

Thanks, Tom, this is great