The towering forms of these pines were once quite numerous in the Santa Barbara urban forest.  Unfortunately, over the last 40 years, drought, insect infestations, and diseases have diminished their numbers and their prominence.  Where distinctive specimens formerly stood in many private gardens and public areas, including the County Courthouse, now only the most resilient ones have managed to survive.

This stately pine starts as an upright tree with a pyramidal shape; with age, it will develop a broad rounded crown that flattens at the top.  When growing on a windy site with ocean influence it develops a picturesque spreading growth habit that is asymmetrical and often with multiple trunks.  Under ideal conditions, it can grow to a height of over 100 feet with a branch spread of over 60 feet and a trunk diameter of over 4 feet!  Again, under ideal conditions - and if it escapes a lethal attack from insects and diseases -  it can live up to 150 years;  however, its normal life span here is relatively short for a conifer, only 80 to 100 years.

Its needles are one of its most distinguishing features.  The needles (3- to 6-inches long) occur at the ends of branches in dense clusters of 3 needles per cluster.  These clusters persist on the tree for up to 3 years, before turning brown and dropping off.  The needles also have a distinctive fresh fragrance when brushed or crushed. 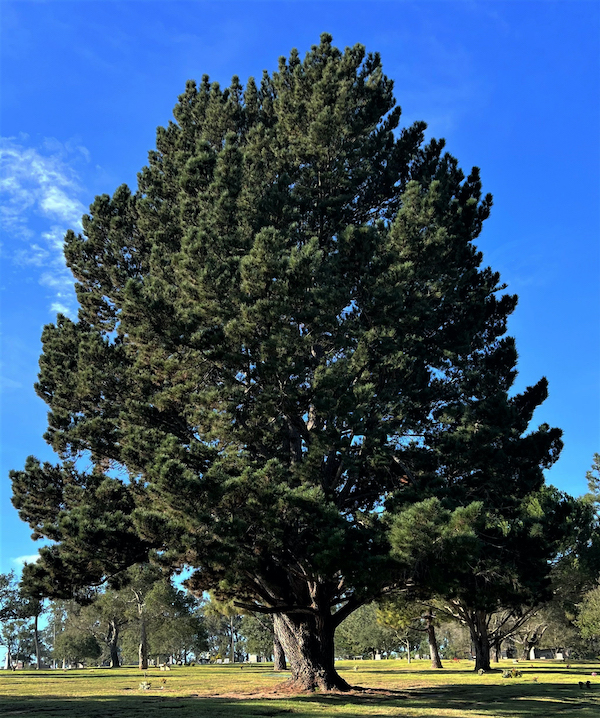 The male cones, which form in clusters on new tree growth, are cylindrical in shape (1/2- to 2/3-inch long), and are an orangey brown in color.  In the spring, the cones shed copious amounts of pollen, which is carried by the wind to cover the female cones – and the windshields of cars parked nearby.

The female cones (2- to 6-inches long and 2- to 3-inches wide) are ovate, though asymmetrical in shape, and tend to curve backward on the stems.  These cones are lavender in color when first appearing, turning an orangey brown at maturity, and then a grayish brown with age.  They can occur as a single cone standing alone but more often form at the ends of branches in radiating whorls of 3 to 5 cones.  When pollinated, they will develop into mature cones only after two years have passed.  Mature seed cones normally persist on the tree for 6 to 20 years, but sometimes remain attached for over 40 years!  Some cones are serotinous, meaning they will remain closed until stimulated by high heat or fire.

The female cones produce compressed-ellipsoid shaped winged seeds (a ¼- inch long seed capsule attached to a flat, papery, wing that is 1-inch in length).  The seeds are generally dispersed by the wind - but are also carried away by scrub jays or small mammals who are looking for a nutritious and tasty snack.

The bark is thick and rather rough, with deep vertical fissures.  It is a light gray brown when young; as it ages, it turns dark gray to black, with reddish brown within the fissures. 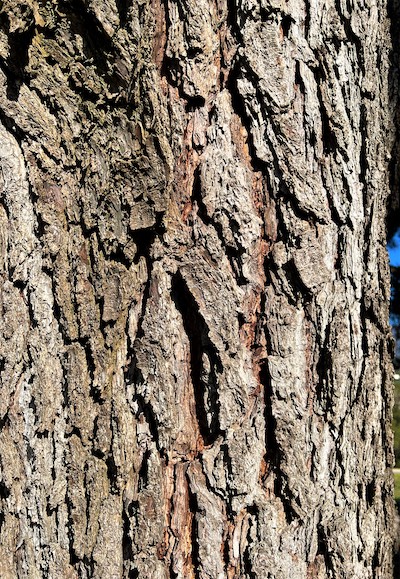 The native range of Monterey Pine is limited to the fog belts in only three coastal areas of California and from sea level to 1,200 feet elevation.  The first population is in San Luis Obispo County, extending south and east of Cambria to San Simeon and Hearst Ranch; the second is in Monterey County; and, the third is in Santa Cruz and San Mateo Counties.  Surprisingly, a 2-needled subspecies is found on Guadalupe Island and on Cedros Island, both of which are off the west coast of Baja California, Mexico.

Remarkably, despite its small native range, Monterey Pine is now the most widely planted pine species in the world!  In the world!  It is greatly appreciated in the forest industry - for its rapid growth and for its use in the production of lumber and wood pulp.  Its bark is harvested as chips for landscape purposes and for orchid mix.

All these fine qualities have resulted in Monterey Pine becoming the leading introduced species in Australia, Chile, Argentina, Uruguay, Kenya, South Africa and Spain, and New Zealand. In fact, in New Zealand, it is presently the most commonly planted tree.  Importantly, instead of displacing the indigenous forest trees in those countries, this imported immigrant has reduced the economic pressure to cut down native forests.  Hurray!

Historically, indigenous peoples in California gathered Monterey Pine nuts as a highly nutritious and major food staple.  A native stand in Pacific Grove, California, continues to be a major wintering habitat for the monarch butterfly.  People often remember that, during the 1970s through the 1990s. it was the conifer most often grown on local Christmas tree farms for sale as “cut yourself” trees and as living trees in containers.

The common name “Monterey Pine” pays homage to the Monterey Peninsula, where the largest native groves still exist;  it is the common name most used in California.  Its other common names, “Radiata Pine” and “Insignis Pine”, are increasingly used worldwide.

Its botanical name is Pinus radiata.  The genus name, Pinus, is Latin for “pines”. The specific epithet, radiata, is also Latin and means “radiating”, referring to the way the mature seed cones ring the branches like radiating spokes on a wheel.  Some sources say it also refers to the radiating marks on the cone scales.

Monterey Pine tolerates a wide variety of soils but does prefer well drained, sandy loam.  It should be planted in full sun and in areas that will get fog in the spring and summer.  Of course, it should always be given ample room to develop to its mature size.  Once established, it can survive on our normal rainfall;  nevertheless, it will become stressed during drought conditions, so supplemental irrigation will then be necessary.

When stressed, Monterey Pines can become susceptible to attack by common bark borers, small insects that will weaken and ultimately kill the trees.  Beginning in the mid-1980s, Monterey Pines additionally began to be infected with an invasive fungal disease, called “pine pitch canker” (Fusarium circinatum), which causes significant dieback of new growth.  While this fungal disease has caused considerable damage - and death - to both native and cultivated trees, many infected trees have shown a natural resistance and continue to thrive - giving hope that these strong trees can be cloned for replanting.

Monterey Pine grows readily from seed, germinating in about four weeks at room temperature.  It can also be propagated asexually by cuttings, creating trees that are genetically identical clones.

In California, Monterey Pine had been planted for many decades primarily as a landscape tree, which significantly extended its native range.  However, it has fallen out of favor in recent years, due to its susceptibility to insects and disease, and is now rarely propagated by commercial nurseries.  Perhaps by cloning disease-resistant cultivars, it will once again be regularly available on the market.

Fortunately, we are still able to enjoy the majestic beauty of Monterey Pine in many locations around town.  Mature trees can be seen in the Douglas Family Preserve, in the 800 block of Carrillo Street (mixed with Monterey Cypress), in the 3700 block of Modoc Road (mixed with other conifers), in Skofield Park, in MacKenzie Park, in Hidden Valley Park, in Oak Park, and at the Santa Barbara Cemetery.

[ED Note: This article has been updated with corrected information about the Monterey Pine locations.]

There is hope if your pine tree is attacked by the bark beetle. Weeping sap around the trunk is an early sign of infestation, and the top of the tree will be the first area to turn brown. If you catch the infestation before it does too much damage, you can save the tree. Do your research and apply a systemic insecticide like Acecap. This method will stop the beetles in their tracks and protect the tree for a considerable time. I think it’s also very interesting these trees native to places like cambria and Monterey experienced so many fires over time they adapted cones to release seeds when exposed to heat. The best time for a seed to grow is after a fire, so this adaptation would have helped the species tremendously. I believe the lack of fires in recent years due to human intervention is a major contributor to the diseases and pests that are now destroying so many of these beautiful trees. Fires not only create ideal conditions for new trees to grow, they also wipe out pests.

When I purchased my home 25 years ago the front yard had 4 scraggly K-Mart Christmas tree left-overs that the previous owner had gotten free after the sale lot packed up and left. They were 3' high and surrounded by weeds. One succumbed to pine tree blight, one has been hit several times by speeders losing control coming down the hill but has weathered the gouges, and two are now 3-story tall beauties. Wonderful trees.

Monique Limone got an

Sorry if my answer was

My bill more than DOUBLED

Art Culture and teaching the

SHASTA - all the more reason