The two properties — Dayspring owns one and he co-owns the other with Michael Siegfried of Roseville, Calif. — are located along an oak-studded ridge just east of Tepusquet Canyon, a picturesque rural neighborhood of about 375 homes.

Siegfried was seeking permits to grow five acres of cannabis under hoops on the in-holdings, which total 160 acres; he proposed to employ 60 workers during two seasonal harvests per year. He took over the permit applications last August, signing them as manager of Depp Mts 3 and 4, a limited liability company with the same business address as the Natural Healing Center, a pot shop that Dayspring opened in Grover Beach.

Siegfried did not respond to a request for comment this week, but his withdrawal of the applications appears to mark the end of any efforts to grow cannabis on Dayspring’s land in this county, at least for the foreseeable future. Brand-new applicants face a long wait because the 1,575-acre cap on North County cannabis cultivation has already been reached.

“This is about as good news as we can expect,” said Dave Clary, who for years headed up a cannabis “crisis committee” in Tepusquet Canyon with his wife, Lil, filling what he said were “six binders” to keep track of Dayspring’s operations.

“Frankly,” Clary said, “Dayspring has just kissed everybody off. He has proven to be a crook, which does not surprise anybody. We don’t want him around.” 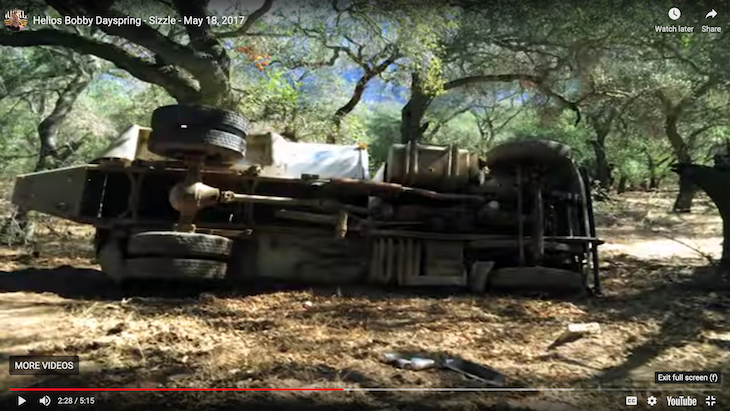 Dayspring’s speeding water tankers sometimes wound up wrecked on Tepusquet Road, a narrow and winding road through a remote rural canyon of about 375 homes. (2019 Courtesy photo)

Residents had complained for years about night lights, noisy generators, truck wrecks, boomboxes and heavy truck traffic to and from Dayspring’s “grows” in the narrow canyon and the Los Padres beyond. Dayspring claimed to have been growing medicinal marijuana in these locations before 2016: under the county’s permissive cannabis ordinance, he was then allowed to continue cultivation under “legal, non-conforming” status, so long as he applied for permits.

Dayspring’s “grows” in the Los Padres racked up a host of zoning violations that have not been corrected to date, including illegal grading; illegal trailers, generators and gas tanks, and illegal expansion of cannabis plantings, county records show. Dayspring also was cited there for state water quality violations, including improper waste disposal and growing marijuana too close to a creek.

In Tepusquet Canyon, where Dayspring was seeking permits for 44 acres of cannabis on four properties, he was similarly cited for multiple county and state violations. His operations in the canyon were shut down in 2020 when the county Board of Supervisors banned all “grows” in rural neighborhoods. Dayspring’s violations regarding illegal trailers, hoop-houses, generators and fuel tanks in the canyon remain uncorrected today, county records show. 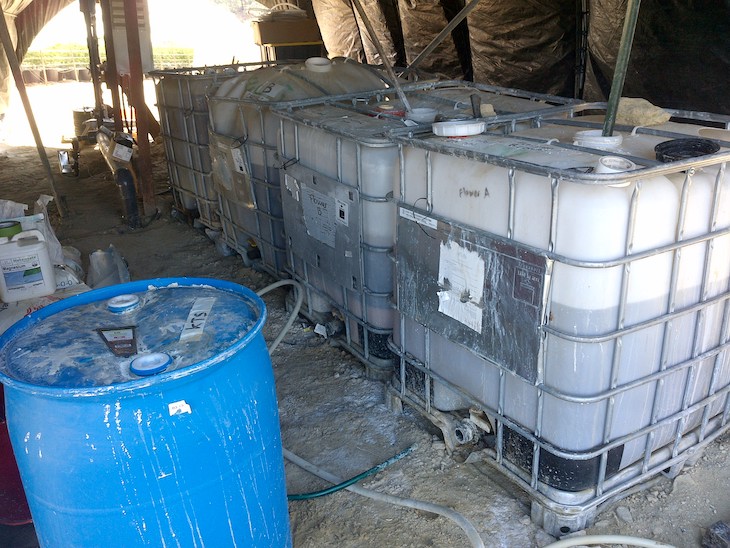 Liquid fertilizer tanks on Dayspring's property in the Los Padres were stored on bare ground within the 50-foot creek setback. (2019 Photo by the Central Coast Regional Water Quality Control Board)

Last year, Dayspring’s company, 805 Agricultural Holdings, paid a $40,000 fine to Santa Barbara County and the state Department of Fish and Wildlife for violations of the state Fish and Game code. These included polluting Tepusquet Creek with diesel fuel, pesticides, fertilizers and plastic pipe; removing vegetation from the creek; grading a road and erecting a hoop house within the creek; and dumping tires, a TV and a bed frame near the creek. Dayspring co-owns the property in question at 1556 Tepusquet Road, together with Luis Gonzalez and Knut Siegfried.

On May 27, Dayspring is scheduled to be sentenced in the U.S. District Court of Los Angeles; he faces up to 13 years in prison for tax evasion in San Luis Obispo and Santa Barbara counties and bribery of a San Luis Obispo County supervisor. Court records show that the bribe was $32,000, and that Dayspring must pay the Internal Revenue Service $3.4 million.

Melinda Burns is an investigative journalist with 40 years of experience covering immigration, water, science and the environment. As a community service, she offers her reports to multiple publications in Santa Barbara County, at the same time, for free.

This is good news. He should be pursued or sued for the uncorrected violations. Need $$ from him to repair land damage. Good riddance.

Racers use this straight away

By the way, UCSB Daily Nexus

Duke you are sympathetic of

Kind of kludged up here; the

This is just tragic. We heard

To be factual, Republicans

This is so very sad!! They

And Duke - about two hours