It is with great sadness that the family of David Lewis Thoreson, longtime resident and personality of Santa Barbara, announces his passing in Lynchburg, Virginia, on October 10, 2018. Dave and his wife Janie had moved to Lynchburg in 2008.  Dave was a beloved physical education teacher at La Colina Junior High School for 38 years where he was renowned for his enthusiasm, humor and zany approach to life circumstances. 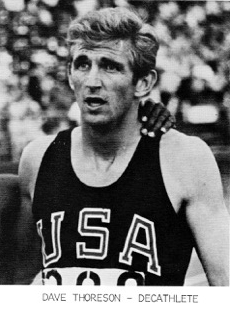 David was born in Valley City, North Dakota on May 16, 1941. His parents moved the family to California where Dave spent his early years in the Oceanside-Carlsbad area. He loved people and described those years almost like a Huckleberry Finn adventure. Dave never met a stranger he couldn’t find some commonality with.

Dave was a talented athlete and earned a track and field scholarship to Westmont College. Dave competed in the Decathlon where he was nationally ranked for many years and won the bronze medal in the 1967 Pan American Games.

His inventive mind developed the Thoreson Fitness Obstacle course which can still be found at several local schools, as well as an exercise bike for disabled people - the Hardy walker. He also came up with the idea of the 30 Minute Decathlon – a Herculean event to finish even for Olympic level athletes and not often attempted - but just crazy enough that it caught on as a right of passage for Decathletes.  Dave’s score of 6233 was a World Record for several years.  Dave also performed stunt work in several Disney movies.

Dave is usually remembered with a smile and a humorous tale by all who came in contact with him, including those he competed against in track.

But he was probably best known in Santa Barbara as “Mr. Thoreson” to the many thousands of La Colina Junior High students who enjoyed his unconventionality, such as running up the sides of walls, jumping over seemingly too high objects, and his ability to motivate students to push themselves beyond what they believed they were able to do physically.

David was an institution at La Colina. Even in retirement it was not uncommon, when walking around the Santa Barbara area with Dave, for adults - sometimes with children of their own - to hail Dave with a big smile and, “Hey Mr Thoreson. Do you remember me?” To which Dave always answered, “Of course I do!”

Dave is lovingly remembered by his wife, Janie, of 43 years, and his children, Ozzie Thoreson, Mike Patton, Lisa Patton (deceased), Tamara Orozco, Tye Thoreson, Tiffany Wallace, and seven grandchildren and his siblings, Cheryl Johnson, Jack Thoreson, and all their spouses and kids.

But especially Dave “Mr Thoreson” will be remembered by the kids - kids young and old - because Dave was always a kid at heart.

Memories of Dave can be sent to [email protected]

Mr. Thoreson was loved and admired.

A great teacher and a great man...he will be missed!

Absolutely remember Mr. Thoreson when I was at La Colina. Always looked forward to PE class because of him...Will be missed!

For real - pretty sure it was

One Death and 77 New Cases

Where in the world does it

If you, or any dog owner, is

MY point was that your

I saw what you wrote.

He was 76 and obviously had a