Today, following an update on the Whittier Fire, some of the first responders who were involved in the widely publicized Circle V Ranch Camp rescue on July 8, 2017 were present to provide more details of the incident. This press conference provided additional facts and insight into the coordinated effort involving the multiple agencies who rescued 82 campers, counselors and staff members who were trapped by the fire at the Circle V Ranch Camp.

At July 8, 2017 at 1:42 p.m., concerned citizens reported a fire now known as the Whittier Fire to the Santa Barbara County Public Safety Dispatch Center.  The fire was located near the entrance to Camp Whittier and the Cachuma Lake Recreation Area.  The fire burned toward the Circle V Ranch Camp where 124 people including 88 campers, 36 adult staff members and counselors were attending a summer camp.  Thirty campers and 12 staff members were able to evacuate in vehicles.  Eighty-two people could not leave when a wall of flames, falling trees, rocks and debris blocked the dirt road that led to Highway 154 from the camp.

At 2:19 p.m., Dispatch received the first report that campers and staff members were unable to leave the Circle V Ranch Camp.  At 2:20 p.m., Oaks and Sheriff’s Lt. Brian Olmstead began an evacuation and rescue plan.

At 2:25 p.m., Sheriff’s Deputy Brice Bruening who is assigned to the Santa Ynez Band of Chumash Indians, notified Dispatch that the Chumash Casino would send buses to help in the evacuation effort.

At 2:30 p.m., Sheriff’s Deputy Dave Wicklund drove toward the Circle V Ranch Camp up the dirt road but was not able to drive to the camp due to flames and falling debris.

At 2:45 p.m., Sheriff’s deputies in eight patrol cars, led by Sgt. Neil Gowing attempted once again to access Circle V up the dirt road.  They drove up the road about one mile but when, a wall of flames engulfed the roadway, they were unable to proceed any further.

At 2:59 p.m., Dahlberg, who had trained for structure protection simulations at Circle V Ranch in the past, drove the one and one-half mile dirt road to the Circle V camp.  When he arrived, he met the campers inside the dining hall area along with a handful of staff members waiting outside.  Dahlberg assessed the situation and decided the safest course of action was for the campers, staff members, and counselors to shelter in place.

Santa Barbara County Firefighter Mark Linane had offloaded his bulldozer in the area of Camp Whittier to begin cutting fire lines on the fire’s edge.  When he heard there were children trapped at Circle V Ranch and he turned his dozer, heading toward Circle V Ranch.

For the next two hours, Dahlberg calmed the campers and reassured them of their safety.  They remained sheltered in place inside the dining room building until Linane joined Dahlberg when he reached the Circle V Ranch Camp in his dozer.

When Santa Barbara County Battalion Chief Matt Farris arrived at the Circle V Ranch he, Dahlberg and Linane began active fire suppression to minimize the impact on sheltered campers and protect the structures from encroaching flames.

At 4:30 p.m., the Sheriff’s Search and Rescue team and Sheriff’s personnel staged at the Circle V Ranch entrance on Highway 154.

At 4:40 p.m., Oaks directed Olmstead to send the extraction vehicles to the camp.

At 4:56 p.m., they arrived at the Circle V Ranch Camp and coordinated with camp staff members to assign children, counselors and staff members to the vehicles.  Once everyone was safely in vehicles, the bulldozer, driven by Linane, led the caravan down the dirt road toward Highway 154.  The bulldozer minimized the threat to the vehicles and cleared fallen trees and other obstacles partially blocking the roadway.

At 5:30 p.m., the caravan reached the intersection of the camp road and Highway 154.  The children, counselors and staff members transferred from the caravan vehicles into two Chumash buses that shuttled them to Mission Santa Ines where they were reunited with their family members.

This rescue is a great example of the cooperation among various agencies who have worked together on major incidents over the years.  This working relationship has developed a great foundation that was evident during this potentially devastating situation.

Rescue crews safely evacuated a large group of children that were camping at Circle V Ranch who became trapped by the Whittier Fire on Saturday. 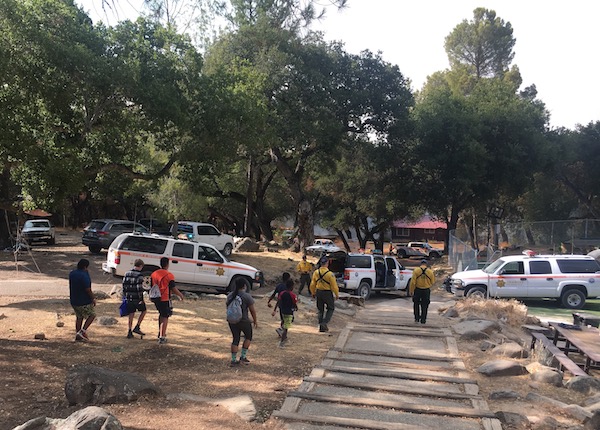 When crews were evacuating Circle V Ranch, the road became inaccessible due to flames on both sides of the road. A group of approximately 63 young campers and staff members were forced to shelter in place. Firefighters on scene were able to stay with the campers until the roads became accessible.

While trying to evacuate the children, a patrol car parked along SR-154 became engulfed in flames and was destroyed. 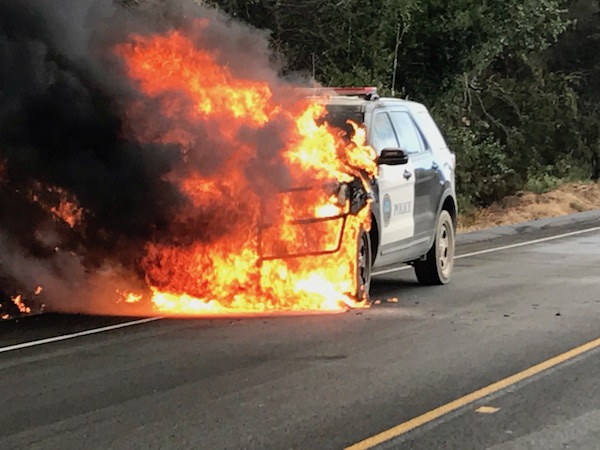 "On behalf of Circle V Ranch Camp Director Ray Lopez, we are so very grateful to first responders, staff and volunteers who helped safely evacuated ALL our Session 2 campers and staff yesterday (Saturday, July 8, 2017). All Session 2 campers and staff are safe and accounted for and returned to their parents/guardians throughout the counties of Santa Barbara, Ventura and Los Angeles by 11:15pm on Saturday, 7/8/17," said Laura Kath, spokesperson for Circle V Ranch Camp, in a written statement.

The Session 3 Space Week at Circle V Ranch Camp has been canceled until further notice due to the Whittier Fire and all fees paid will be refunded.

"Circle V Ranch Camp has been on 30 acres of leased land from the US Forest Service since 1990. As of this time, we understand from officials that structures have been saved on the camp site itself," said Kath.

I used to tell my girl friend

If you live in the homes

SBOBSERVE - I mention kids to

OBSERVE THE RULES: "Rules for

I agree with other comments

Nothing you do or write