An effort spanning more than two decades to restore a heavily polluted system of streams high in the Sierra Nevada of California has been declared a qualified success — and there is more work to come.

Leviathan, Aspen and Bryant Creeks, once crystalline natural streams and home to a plethora of native birds, fish, and insects, have at times run a sickening and toxic rusty-orange color. The culprits: iron and other acidic, heavy metal pollutants released from the so-called Leviathan Mine, a badly scarred 250-acre open-pit sulfur extraction site located about 25 miles southeast of Lake Tahoe.

But now, several miles of polluted stream is recovering and toxic flows are being abated, thanks to a collaboration led by a team of UC Santa Barbara scientists. Years of compiled research on the Leviathan project has been published in the Journal of Environmental Toxicology and Chemistry. 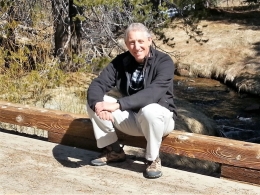 “This is an encouraging story that shows the success of lasting efforts to capture and treat the mine effluent and improve stream water quality and ecological health,” said David Herbst, a UC Santa Barbara freshwater aquatic scientist who oversaw the group working for government regulators and industry representatives. “At the same time, it also is cautionary in that there is still work to be done to complete the restoration.”

First established by Anaconda Mining in 1951, the sulfur extracted from Leviathan was trucked to another mining facility near Yerington, Nevada, where it was used to dissolve copper ore. In 1962, Anaconda ceased operations and sold the property to local interests. In 1977 Anaconda was purchased by Atlantic Richfield, later becoming a subsidiary of British Petroleum. Today BP remains actively involved in the cleanup effort at Leviathan, a “superfund” site as designated by the U.S. Environmental Protection Agency.

While open-pit or strip mining continues in the U.S. and around the world, it is widely regarded by scientists, naturalists, and regulators as a dangerous environmental practice, posing a significant threat to the environment as such operations contaminate above-ground waterways and underground aquifers. The first step in abating the pollution, Herbst said, was through a process of containment.

Most of the snowmelt and rainfall draining off the exposed soils of the mine was captured in large ponds built at the lower end of the pit, to hold back polluted water and prevent it from entering into the streams. Chemical reaction tanks then treat the water in stages, neutralizing the pH with a calcium oxide base, precipitating dissolved metals back into solid form and releasing the cleansed water into Leviathan Creek. The sludge is allowed to settle in evaporation ponds from which the dried sediment is trucked off to hazardous waste storage sites.

An alternative treatment system on Aspen Creek uses sulfate-reducing bacteria to essentially reverse the chemical process that first formed the acidic soup of metals, turning these back into minerals that settle in a microbial wetland from which the biologically cleansed water flows back into the stream.

But the question for the project team was: How can we be sure that the newly reclaimed creek water will safely support and help restore life?

Herbst, who has dedicated much of his career to studying freshwater insect life, monitored the return of many insect species — including midges, mayflies, stoneflies, and caddisflies — in downstream areas of the creek system and discovered that they began to flourish, moving upstream as they recovered. As the water quality has improved, and the food web becomes re-established, fish and other aquatic and riparian life can recover.

“The monitoring of stream bugs then tells us, by their numbers and variety, how well the treatments have worked to alleviate the toxicity,” said Herbst, who has studied the ecology of mountain streams for some 20 years from his laboratory at UCSB’s Sierra Nevada Aquatic Research Laboratory in Mammoth Lakes, part of the UC Natural Reserve System. “Clearly, this is a case of the ‘canary in the coal mine’ and I’m glad to report that our canaries are alive and doing well.”

Altogether, Herbst said, the work shows that efforts to clean the water and restore life have been successful along downstream portions whereas upstream areas closer to the mine, while improved, remain in a damaged state. But because the mine location and altitude make it subject to heavy and inaccessible snows each winter, the toxic remediation efforts cannot be implemented 12 months a year.

“Complete recovery may require that cleanup efforts of chronic pollution continue year-round rather than only for the part of the year when the remote site can be accessed,” Herbst said.

Herbst called the project a resounding success, crediting his University of California colleagues, the U.S. EPA and other community and industry stakeholders. He noted that because of these efforts, some eight miles of polluted stream is recovering and toxic flows are no longer reaching the main stem of the East Carson River.

“One of the most important lessons from this work is that we cannot retreat from basic science,” Herbst said. “How it has been used in this case demonstrates the importance of using science to inform how we go about doing environmental cleanups and large-scale restoration projects. We must know what works and what doesn’t and under what circumstances, so we can be most successful and prudent in how we spend funds to restore damaged ecosystems.”

Toggle Comments (Show)
Damage Undone
I'm very glad to hear about these successes. And I'm sorry it often takes so much research, effort, and work to restore what humans so easily destroy. As an avid fly fisherman, hunter, and hiker I have witnessed many situations where mining has ruined and polluted beautiful natural areas, so I applaud the UC's Natural Reserve System. Two thumbs up for everything you do!
Please Login or Register to comment on this.

Yes, Santa Barbara has its

Oooh. Oooooooh. I love that

It's interesting to note that

they wear them regardless,

Ironically when gangs are

nope didnt hear a thing, we