Santa Barbara County firefighters have determined the cause of the fire to be an automobile traveling northbound on Hwy.1. The fire was determined to be accidental.

The Cruces Fire is now 100% contained. It's estimated to have burned 77 acres.

The Cruces Fire is now at 40% containment at approximately 80 acres. Containment will continue to increase throughout the day with 100% containment expected by 6:00 p.m. tonight.

The estimated acreage dropped from 170 to 80 after visibility increased, although it may shift again as firefighters walk and map the hilly perimeter with GPS.

As of 7:00 a.m. Thursday, all evacuation orders have been lifted. 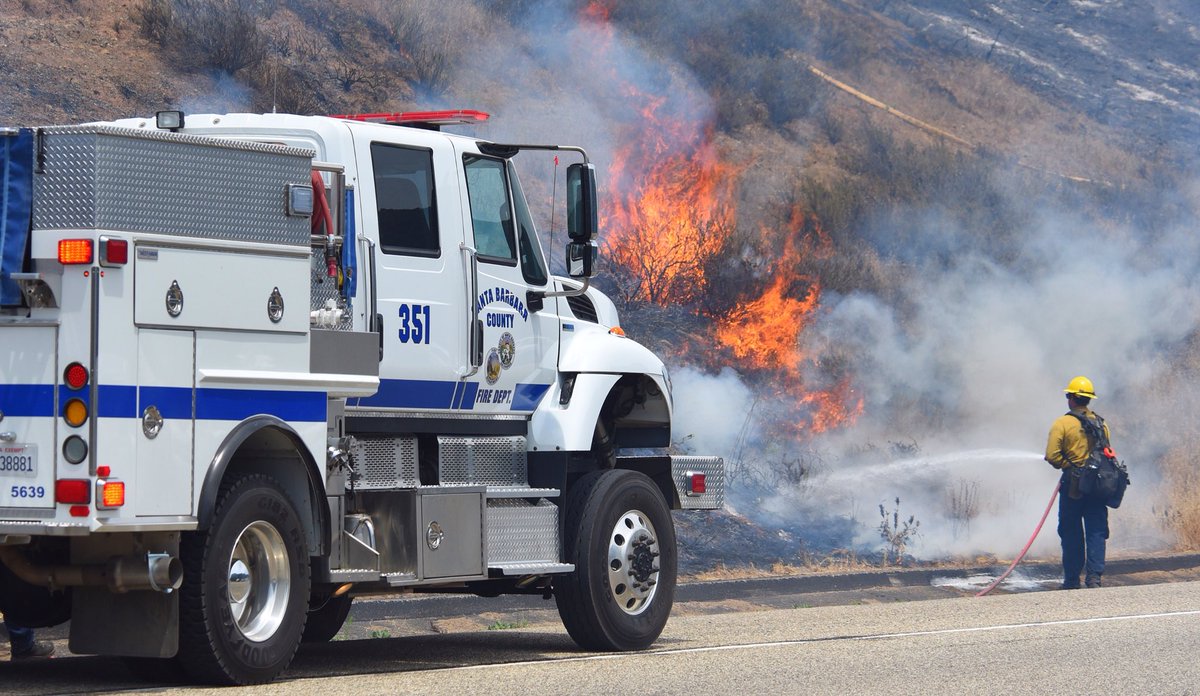 The Cruces Fire is currently 150 acres with the potential to grow much larger, said Captain Dave Zaniboni.

The fire along Highway 1 is in good shape, but the northern edge of the fire is hard for crews to access, said Zaniboni.

There are approximately 150 firefighters on scene, including 9 engines with 5 more en route, 2 helicopters, 4 air tankers, 3 hand crews, and 4 dozers.

The only evacuation ordered from Incident Command on this fire is in the 7200 block of Highway 1. There were a couple of ranches close to where the fire was burning and they have been safely evacuated. An evacuation warning has been issued only for the Hollister Ranch, Cojo, Gaviota State Beach areas.

The cause of the fire is unknown and investigators are on the scene.

Highway 1 is closed from SR-246 to Highway 101 in both the northbound and southbound directions. Traffic is also delayed in the surrounding areas.

Call the 2-1-1 helpline for information 24 hours/day, 7 days/week in multiple languages. If you haven't already done so, sign up for emergency alerts from Santa Barbara County at www.readysbc.org.

Crews work the western edge of the Cruces fire with the help of air tankers and water dropping helicopters from the Santa Barbara air support unit. Call Newsline for updated information pic.twitter.com/nsBO6pEpQP

Update by edhat staff
12:55 p.m., July 18, 2018
Highway 1 is shut down near the Highway 101 interchange and evacuations have been sent out for a rapidly growing brush fire.

Now being called the Cruces Incident (Cruces Fire), it's located 3-4 miles from Highway 101 and currently is not threatening any structures. A 2nd alarm call has been issued for this fire as 4 air tankers and 2 helicopters were ordered to make water drops.

Santa Barbara County Sheriff's Office advised the fire has the potential to grow 500-1000 acres or more.

As of 12:50 p.m., the fire was about to jump Highway 1. A report of a Reverse-911 was activated for people in the Hollister Ranch and Gaviota State Beah areas, although this has not been officially confirmed.

Ranchers are cutting fences for fire crews and cattle may be wandering on the roadway.

More information will be updated to this article as soon as it's available.

Highway 1 is shut down near the Highway 101 interchange for a reported brush fire and heavy smoke in the area.

California Highway Patrol reported the fire started at 11:54 a.m. with visible smoke and a truck pulling a trailer seen next to the fire.

As of 12:03, Highway 1 has been closed in both directions due to heavy smoke in the area. The vehicles in the southbound lanes are being told to turn around.

It's unclear how long the roads will be closed or what the status of the fire is.

More information will be updated to this article as soon as it's available.

Interesting how many so

I totally agree. This would

I don't know about the

The mural is from the heart.