The Santa Barbara County Fire Department is pleased to announce that the California Department of Forestry and Fire Protection (CAL FIRE) has awarded the Department a California Climate Investment (CCI) Fire Prevention Grant for the Lompoc Valley Fuel Reduction Project. The Lompoc Valley Fuel Reduction Project is a 4-year, $2.5 million project with the Santa Barbara County Fire Department acting as the lead agency. The plan includes treatments for community defensible space around Vandenberg Village and Mission Hills; 15.1 miles of roadside fuel reduction along Harris Grade, Rucker and Burton Mesa Roads; various fuel reduction efforts with California State Parks, including the removal of over 150 dead trees within the La Purisma Mission; and an 18-mile fuel treatment area spanning from Vandenberg Air Force Base to the outskirts of Buellton.

In response to the unprecedented and damaging fires California has experienced over the last three years, former Governor Jerry Brown and current Governor Gavin Newsom have made preventing and mitigating large wildland fires a priority for their administrations. As a result, the State has increased grant funding available for fuel reduction, fire planning, and fire education programs. As California continues to take measures to prevent damaging wildfires, CAL FIRE recently announced over $43 million in grant awards to fund 66 local fire prevention projects across the State, of which the Lompoc Valley Fuel Reduction Project was one of the awardees.

Santa Barbara County has experienced six major wildfires over 5,000 acres. The Lompoc Valley is an area with a history of large wildfire activity. The most prominent historic fires include the Honda Canyon, 2002 Sudden, and Harris Fires. The Lompoc Valley was also home to the 2016 Canyon Fire that consumed 12,742 acres and the 2017 Rucker Fire, which threatened 100 homes and State Responsibility Areas. Within the proposed project area, old age class Burton Mesa chaparral, as well as stands of pines and grasslands are continuous and threaten the public, firefighters, structures, wildlife, watersheds, and the environment. The Lompoc Valley Fuel Reduction Project boundary influences several communities encompassing approximately 14,300 homes.

The Lompoc Valley Fuel Reduction Project is designed to reduce the impacts of wildfires to this area by mitigating fuel continuity, protect the public, and to provide improved safe separation distance for firefighters. Additionally, the fuel reduction activities in the Lompoc Valley Fuel Reduction Project collaterally benefit the environment by reducing the release of carbon during large wildland fires, a major goal of the California Climate Investment program. The activities in this project protect the surrounding wildlife, watersheds and the environment; while also promoting age class diversity and resiliency for the local vegetation. The Burton Mesa Land Management Plan, completed by the California Department of Fish and Wildlife in 2007, will serve as the guiding document for many of the project activities.

Supervisor Hartmann expressed her pleasure at the funding of the Lompoc Valley Fuel Reduction Project, “I am grateful to the Santa Barbara County Fire Department for developing this plan and applying for this grant. I would also like to thank community members from the Burton Mesa area, the Vandenberg Village Association, and the Mission Hills Community Council, for calling for greater fire safety and for elevating this project as a community priority.” 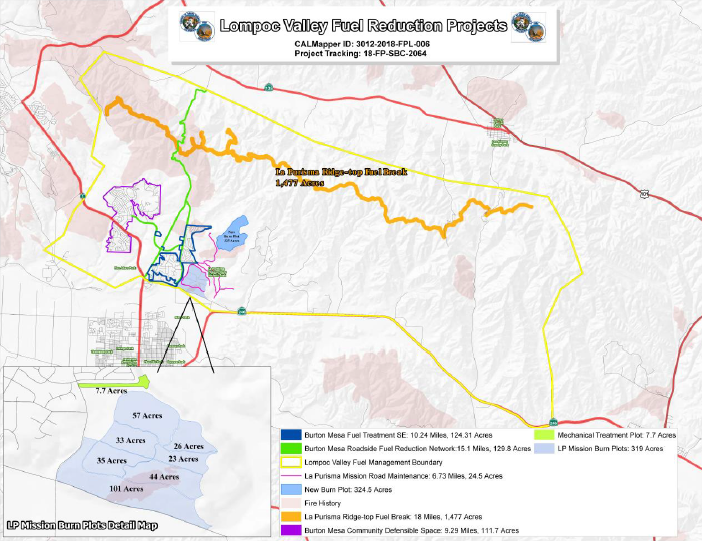 But LOCAL, the City

Ohhh these girls are

If you sit at an outdoor