The Climate Crisis is very much in the news now. This is a global problem, but some of the solutions are happening at a local or regional level.

Craig Lewis of the Clean Coalition gave a spirited talk to the Science and Engineering Council on the subject of Community Microgrids as a way to promote sustainable energy and local energy resilience. He says this is his favorite subject! 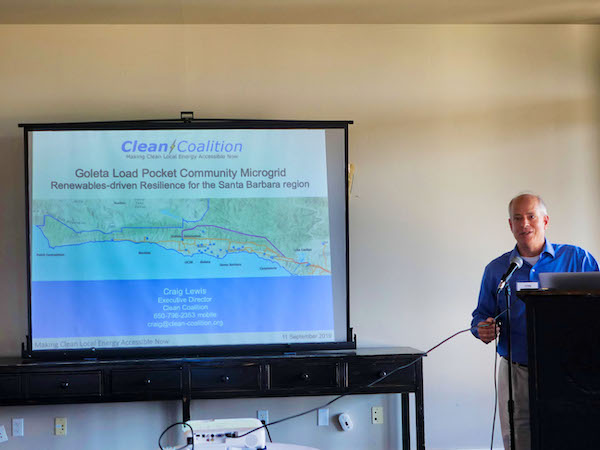 Here are my photos from this event as well as the slides from the talk that Craig Lewis has kindly made public:
http://swt.org/events/sec-microgrids-2019-0911/

Lewis grew up here in the Santa Barbara area then moved away for 30 years for college and career. He is back now and excited to be working on this issue.

The Clean Coalition has a goal of 100% renewable energy with 25% of that being local renewable. That is a magic number to provide community level resilience in case of a disaster that cuts us off from the outside power grid.

"Community Microgrid" is a new approach with a significant part of the energy mix being local. 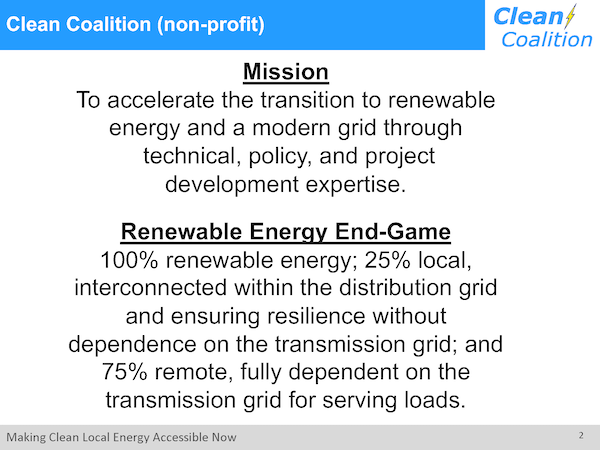 On a large power grid if there is extra demand in one place, power can be drawn from sources on distant parts of the grid. But for local resilience it is necessary to have local energy storage.

Balancing the grid means having stability of Frequency, Voltage and Power.

The "Goleta Load Pocket" is partially in Goleta. It is served by the Goleta Substation. But it spans 70 miles of coastline, from Point Conception to Lake Casitas. It is currently very much dependent on the outside power grid as very little power is currently generated locally. 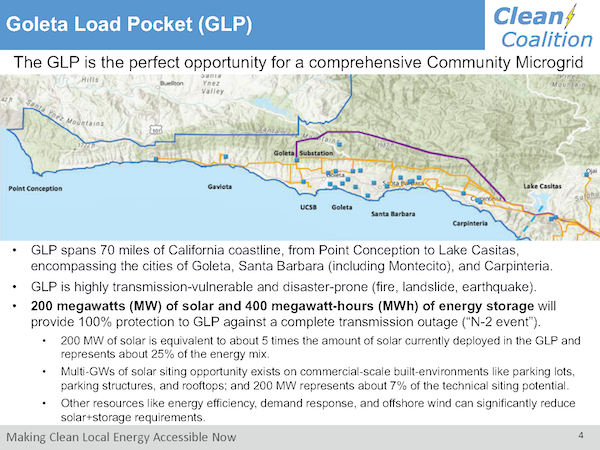 It lies at the end of the regional grid, getting almost all of its power from one set of transmission lines. This makes it very vulnerable to catastrophic failure due to fire, earthquake or heavy rains. A blackout from such disaster could last weeks or even months. 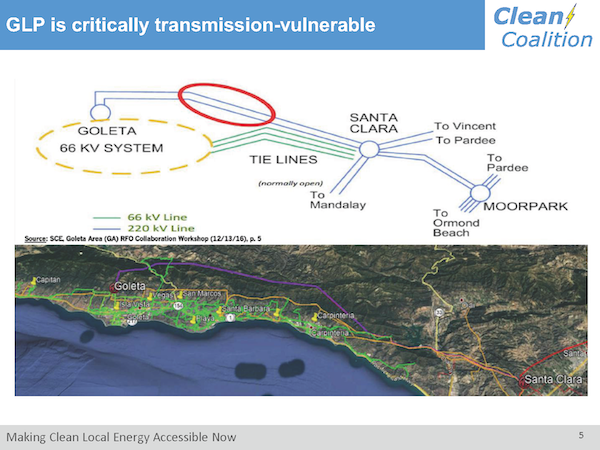 The Clean Coalition wants the Goleta Load Pocket to be a model of a microgrid that is resilient in a disaster and that is powered by renewable energy sources.

What do we need to keep the lights on? We need 200 megawatts (MW) of additional solar power. (That is the peak rating of the panels.) And 400 MW hours of energy storage.

Surprisingly, the storage is not so much of a problem. It is the solar power that is more of a challenge as it needs lots of land. This would be five times more than the current solar power capacity in this area. But it is a reachable goal.

It would require 7% of the built environment to be covered with solar panels. The main point that Craig Lewis wants to convey: If you have connections to commercial property to offer such space, the Clean Coalition wants your help!

We have two transmission lines into our area, but they are on the same towers! They come here from Ventura and enter the area near Glen Annie Road. This area is especially vulnerable to fire and mudslides.

We were hearing his talk at the Frog Bar and Grill at the Glen Annie Golf Course. He noted the room we were in is in the extreme fire threat zone. 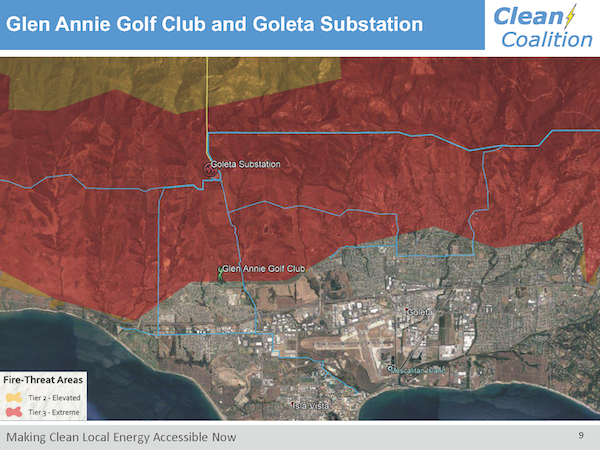 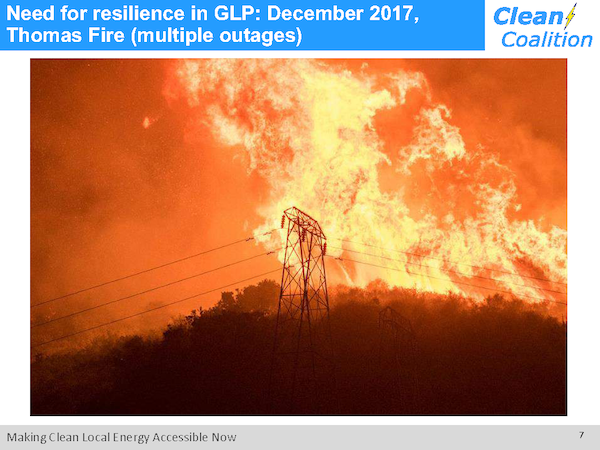 If we lost the transmission lines, the distribution lines could only handle about half the power that is needed.

"Gas peakers" are local generators powered by natural gas. They have been used in the past to add power when the outside grid can't deliver enough. But they are "nasty" for a number of reasons. They are not allowed to run more than 5% of the time.

Southern California Edison (SCE) applied to extend the life of their existing gas peaker at Ellwood. The Clean Coalition helped defeat that. 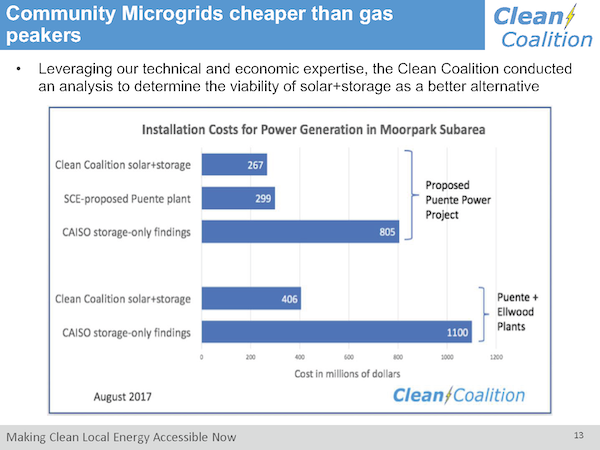 In addition to the local noise and pollution, there is a significant climate impact of natural gas that has been missed by many policy makers: The process of extracting and delivering natural gas (methane) often leaks the gas into the atmosphere.

We often hear of carbon dioxide (CO2) as the main driver of the Climate Crisis. But methane is 120 times as potent as CO2 as a greenhouse gas. (It does not last as long in the atmosphere as CO2, so the effect in the long run is more like 34 times.)

By some estimates, methane is as bad as coal if the leakage is taken into account. It is hard to get solid figures on how much leakage there is.

A similar battle occurred in Oxnard over a larger peaker there Such massive infrastructure costs hundreds of millions of dollars and would be around for a long time. The Clean Coalition defeated it only in the final round.

Natural gas is also not resilient. If a natural gas main line is damaged in a disaster it is down for a long time. 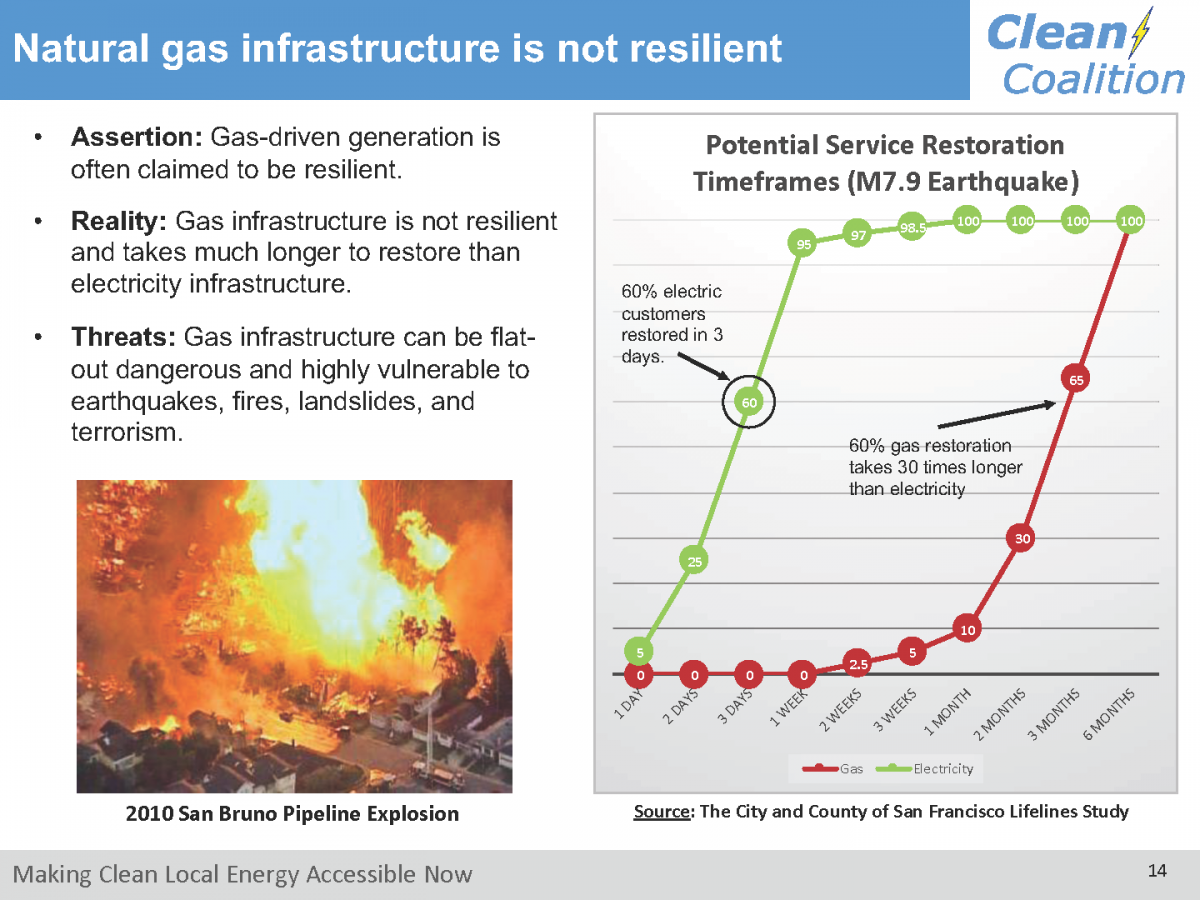 UC Santa Barbara is the shelter of last resort for the region in a disaster. Surprisingly, they have no energy resilience! Not even diesel generators for shelters! The Clean Coalition designed a microgrid just for UCSB. It just needs approval and funding. After those plans were developed, the Thomas Fire hit. 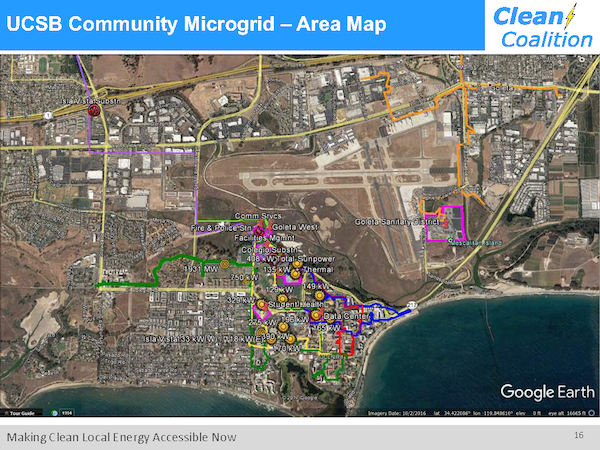 The Clean Coalition did a Solar Siting Survey for Montecito. 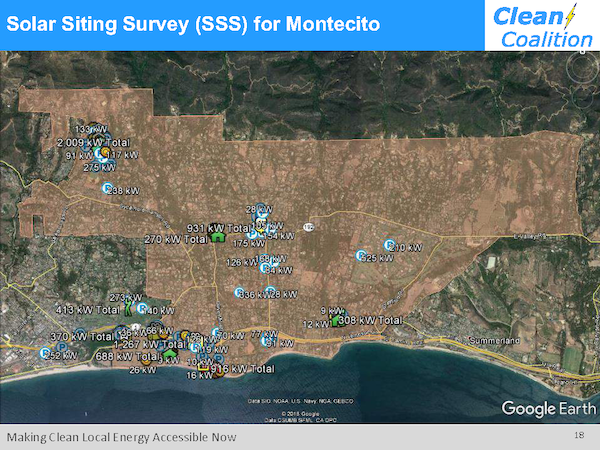 The Water District is a high priority. They pump water needed for fire fighting. The Montecito Union School is the next highest priority. Emergency operations are based there. The Bucket Brigade keeps its gear there.

There are many stakeholders for a Community Microgrid. The one entity that has not been helpful are the "Utilities". We need them because we need to use the existing distribution grid.

SCE has been secretive with their numbers. The Clean Coalition had to reverse engineer public numbers to figure out the need for storage capacity.

Some policy changes are needed. Santa Barbara County bans "utility scale solar power". Fortunately, the Board of Supervisors are unanimous in asking to fix this.

It is good to compare Germany and California since 2002 until now. There is a huge gap. California has 70% more solar power per unit of land area than Germany due to being further south and having clearer skies.

Yet they have covered 90% of their built environment with solar panels! If we did what they did, we would be paying just three cents per kilowatt hour!

Lewis said that "Feed in Tariffs" and "Dispatchability" were key to success in Germany. Feed in Tariffs allowed small solar power producers to sell their power to the grid at the price that it cost them to produce. At first, this was quite expensive. But the economy of scale brought the cost down over the years.

The seemingly arcane "Feed in Tariffs" are essential to encourage rapid development of solar power. 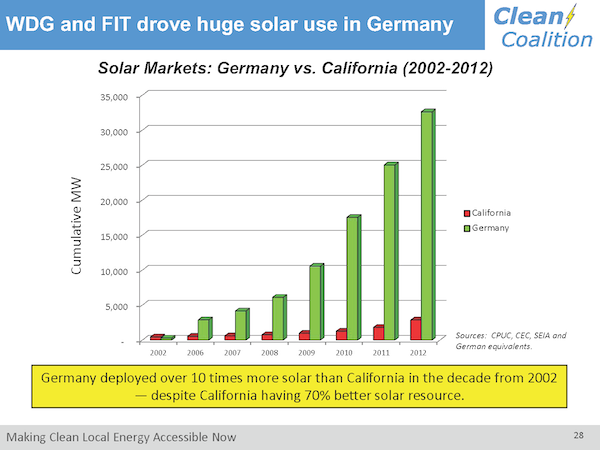 Dispatchability is the ability to use small solar power sources rapidly on demand as needed.

Direct Relief International has a huge roof and parking lot. They currently have enough solar capacity to meet their needs. But 2/3 of their rooftop is just waiting for more solar panels. There is no way to make that work economically because of current regulations that limit what they can do with that extra power. 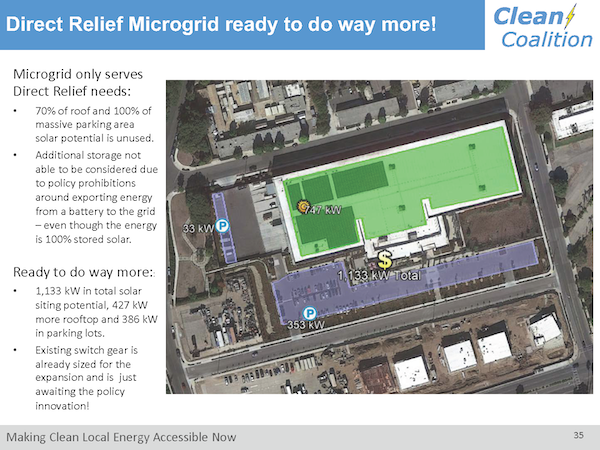 To be resilient locally means being able to keep the most essential needs being met. This includes refrigeration, medical equipment and telephones, for example. This amounts to about 25% of the total power load under normal circumstances.

He gave an example of Valencia Gardens housing in San Francisco for seniors and low income people. It is important that the residents can shelter in place in an emergency. Relocating them would be difficult. Energy storage allows for that security.

Grid Isolation Equipment allows critical loads to be kept on when other power services get cut.

In addition to solar, we have the opportunity for offshore wind power for the Goleta Load Pocket in the Santa Barbara Channel. There are three decommissioned oil platforms out there. It would cost hundreds of millions to remove them. Some can be used for wind infrastructure. Including the underwater power lines.

The Clean Coalition has mapped out the options in some detail to avoid shipping lanes. A floating wind turbine array could be a part of this.

How can we help make these plans happen? The Clean Coalition welcomes contributions. They are not set up currently for individual memberships. But donations of $1,000 or above can be put to effective use.

But their biggest need is access to properties that can be used for solar power and energy storage.

Here is more information about the Clean Coalition:
https://clean-coalition.org/

Craig Lewis urges people to contact him if they have any ideas or information about locations to host solar power and/or energy storage. 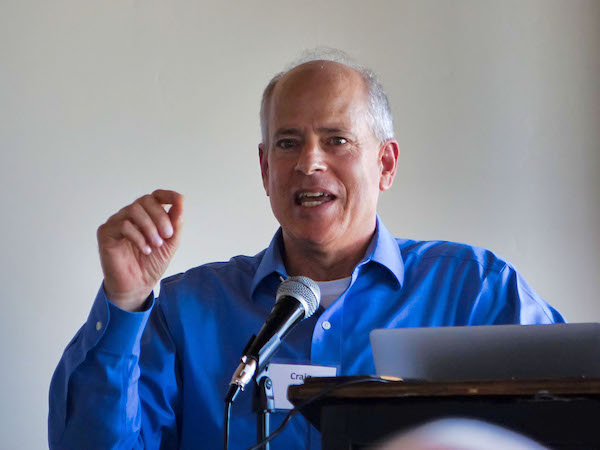 Here is the Contact page for the Clean Coalition: https://clean-coalition.org/contact/

I will add that this presentation was provided by the Science and Engineering Council of Santa Barbara. 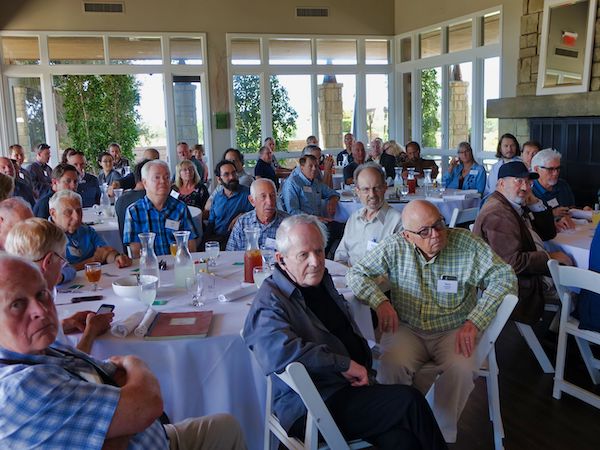 They host monthly talks on local technical innovation as well as providing scholarships and other services to encourage young people to go into science and engineering careers.

Here is more information about the Science and Engineering Council:
https://www.scieng.org/

Big you are typical of

You don’t seem to understand

They should hold the high

Don't know if I'll be hearing

I hear lots of sirens by the

Heard a call out all my