The Oxnard pest control companies that spray avocados in the Carpinteria Valley have pulled out of a proposed agreement with cannabis greenhouse operators, saying they can’t risk contaminating the marijuana crop.

Under the deal, cannabis growers in the valley would have agreed not to sue the commercial sprayers during the weeks they normally spray in the spring. The companies would have been able to use pesticides that work well on avocados but are on the state’s “red list” as contaminants for cannabis.

“We’re all disappointed, but we’re just not going to do it,” said Rob Scherzinger, the founder and manager of Aspen Helicopters, Inc., one of four Oxnard pest control companies that work in the Carpinteria Valley. “It’s just a snake-in-the-grass that will bite us one of these days. It’s a potential loss we can’t afford.”

Graham Farrar, president of the Cannabis Association for Responsible Producers, or CARP Growers, said all 27 cannabis growers in the valley had been willing to sign an agreement and cooperate with the commercial sprayers. No commercial cannabis in Carpinteria has tested positive for pesticide “drift” from avocado orchards since testing began three years ago, he said.

The whole dispute started when the cannabis growers gave the commercial sprayers their phone numbers earlier this spring and asked to be notified when spraying began, so that they could close their greenhouse vents, Farrar said. Members of CARP Growers use beneficial insects, not pesticides, on cannabis.

“There’s no grower that’s ever threatened to sue an applicator or an avocado guy,” Farrar said. “No cannabis growers got mad or tried to push anybody out. We were just trying to be good neighbors.”

But the standoff has upended business as usual for Carpinteria avocado growers. They say they will be forced to revert to an organic pesticide they last used 25 years ago, one that is on the state’s “green list” as compatible with cannabis but is not very effective on avocados. If there is an insect infestation in the orchards this spring, they say, they could wind up next year with scarred fruit that resembles Russet potatoes and sells for half the market price.

“So, marijuana growers will make millions and I will lose up to half the value of my crop,” said Sharyne Merritt, who owns 13 acres of organic avocados near Cate School on Casitas Pass Road. “Doesn’t seem fair to me.” 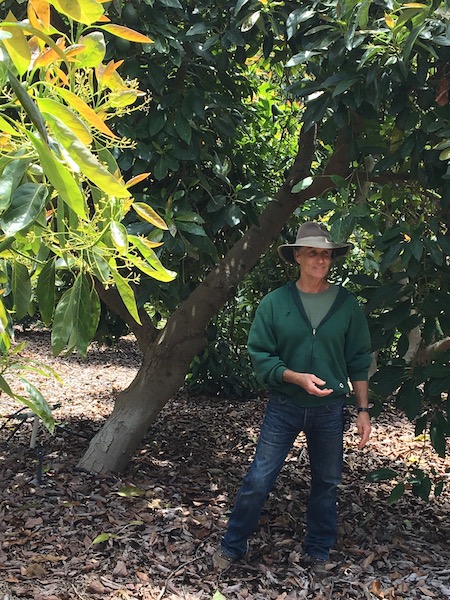 Avocado growers in the Carpinteria Valley such as Scott Van Der Kar say they will be forced to revert to an inferior pesticide this spring, one that is compatible with cannabis but not very effective on avocados (Photo by Melinda Burns)

The avocado industry in the Carpinteria Valley is 70 years old and operates on 2,200 acres. Cannabis has been grown in the valley for about five years; the county has said it will limit the crop to 186 acres.

State law prohibits pesticide “drift” on adjacent properties. If even one part per billion of an insecticide on the “red list” is found in a batch of dried marijuana, the entire batch has to be destroyed. Scherzinger said attorneys have advised the commercial sprayers that they cannot be “held harmless” if they break the law.

“It’s happened too quick for us to react,” he said. “We’re afraid of it this year.”

Scherzinger said Aspen would start spraying Carpinteria avocado orchards this week with Veratran, an organic, plant-based insecticide that is on the “green list” for cannabis. Years ago, when he was using it, Scherzinger said, he would get calls from frustrated growers asking, “Did you put anything in the tank?” Veratran doesn’t work well in the overcast weather known locally as “May Gray” and “June Gloom,” the growers say.

“I voted for Proposition 64,” she said, referring to the 2016 ballot initiative that legalized marijuana in California. “But I did not vote for this. I did not vote to be put out of business.”

Merritt, who serves on the county’s Agricultural Advisory Committee, is also concerned about her land on Santa Rosa Road in the Santa Ynez Valley, where a tenant farmer is growing row crops. Three of Merritt’s neighbors have applied for permits to grow cannabis in “hoop houses,” the tunnel-like structures of white plastic that are often used for growing berries.

“This isn’t only about avocados,” Merritt said. “Olives, walnuts, grapes and vegetables all have pests that farmers treat, even organic farmers.” 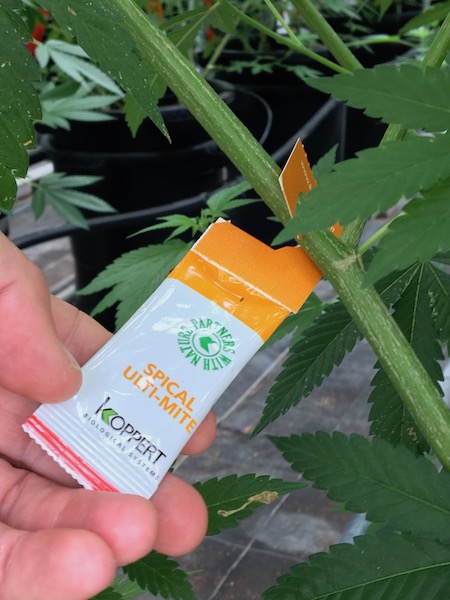 Members of CARP Growers use beneficial insects, not pesticides, to control pests on the marijuana crop (Photo by Melinda Burns)

County Supervisor Das Williams, who lives in Carpinteria, had urged the cannabis growers to come to an agreement with the commercial sprayers.

“I’m not sure what more they can do,” he said this week. “The cannabis folks have bent over backwards and the lawyers are mucking it up.

“Living in Carpinteria, we’re all really close. We all have our kids in the same schools, recreate on the same beaches and go to the same events. If it was just up to Carpinteria, we would have already figured it out.”

Scott Van Der Kar, who grows avocados, lemons and cherimoyas on 50 acres in the Carpinteria foothills, said the high price of cannabis puts the crop “in an entirely different realm,” from, say, daisies or lettuce next door. A pound of marijuana sells for up to $800; a contaminated 50-pound batch would represent a loss of about $40,000.

Van Der Kar is worried that not only avocados but also lemons may be affected by the pesticide restrictions on cannabis. He sprays his lemon orchards four times yearly to fend off the Asian citrus psyllid, a pest that destroyed half the citrus industry in Florida and made its way to California in 2008.

“With the avocados, we’re just talking about fruit damage,” Van Der Kar said. “With the lemons, we’re talking about losing the fruit tree … Why am I bearing the cost and the negative impacts of this new neighbor? What do we get out of this?”

In Ventura County, where 90,000 acres are in row crops, lemons and avocados, some farmers are beginning to grow hemp, a variety of cannabis that can be used for medicinal oils. Hemp is worth much less than marijuana – about $60,000 per acre vs. millions of dollars per acre – but the potential problems of pesticide contamination are the same, said Andy Calderwood, the Ventura County deputy Agricultural Commissioner.

“It will be a concern for surrounding growers,” he said.

(To view the Resolution of the Board of Directors of CARP Growers, click here)

Melinda Burns is a freelance journalist in Santa Barbara. 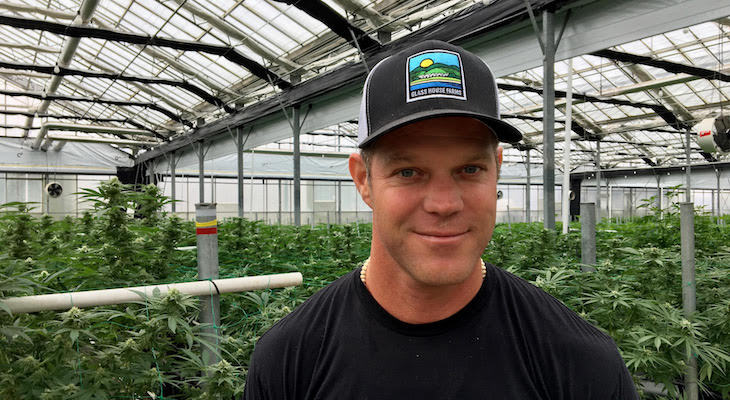 May 9, 2019: The Unintended Consequences of Cannabis

Not only that, but how would

Thank you Salud for working

I agree! Very sad indeed. The

Your reasoning seems to be

The driver was not cited

Haven't we heard enough of

Oh Chip, so naive. It is so