As a prelude to Memorial Day and as a way to honor the first responders of the Thomas Fire and Mudslide, the businesses and merchants of 1187 Coast Village Road joined with Pierre Claeyssens Veterans Foundation (PCVF) Wednesday, May 22, to unveil and dedicate a large flag made from an actual fire hose. Some 25 local firefighters participated along with other first responders, local officials and dignitaries.

The fire hose flag was created by retired Santa Barbara City firefighter John Carrillo to honor the first responders who risked their lives to aid those who were impacted by the Thomas Fire and Montecito Debris Flow. Carrillo agreed to create a limited number of fire hose flags available for purchase, with all proceeds benefitting first responders and PCVF and local veterans. 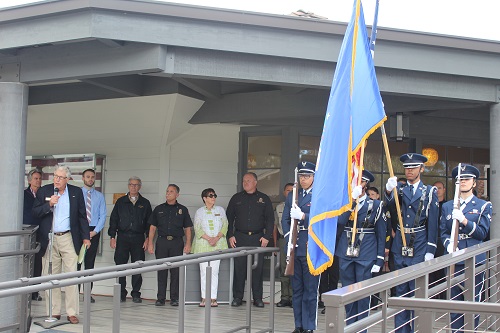 “As soon as we met with John [Carrillo] and saw how beautiful and unique the flag was, we knew it was something that would serve as a touching tribute to first responders, and an important reminder of the resiliency of our local communities,” said PCVF Co-Founding Director Hazel Blankenship. “We are so grateful he was willing to create additional flags, giving more people impacted by the Thomas Fire an opportunity to reflect, and of course raising critical funding for local veterans and first responders in need.” 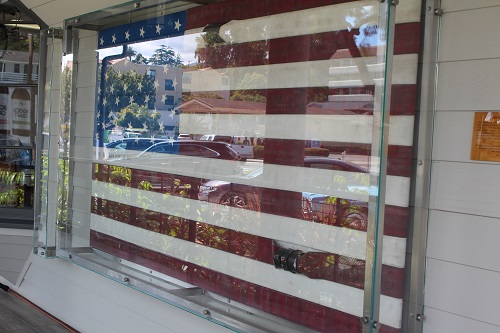 Three original flags are still available at $2,500 and are totally tax deductible.

Thank the Firefighters for their service in saving our lives, God Bless Them....

There is no reason that this sort of phony patriotism should be associated with public firefighting service as though firefighters were super patriots or especially worthy folks. For every opening in the fire departments thousands of people apply and are not accepted. They are appropriately well paid and good public servants but the attempt to garb them in some sort of "red white and blue" mystique is outside their job description.

With the stars rotated like that, is it even considered an official flag?