Here's a composite image of the flyby of asteroid (7482) 1994 PC1 on Tuesday night, taken as the clouds moved in, between about 8:01 and 8:06 PM PST, as the rock was cruising about 1.2 million miles away through the dim constellation Pisces, fairly high in the SSW. 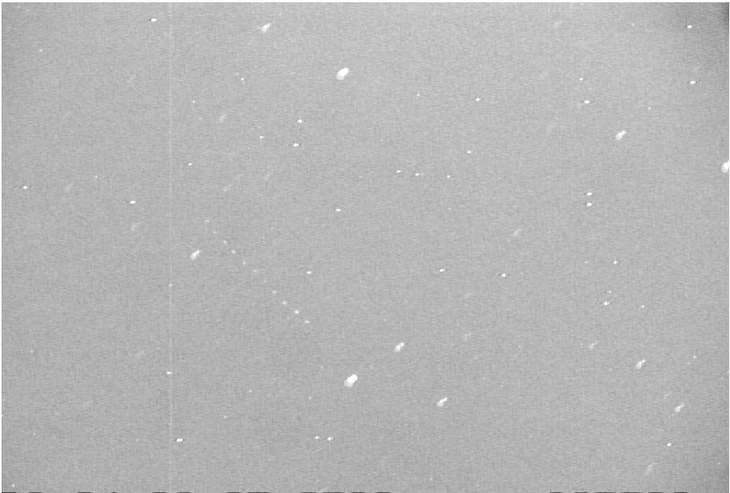 It's a montage of frames taken from a monochrome video, spaced 30 seconds apart, and then superimposed. The tracking mount drifted, so the background stars are a bit smeared, but you can see the asteroid's path as a series of dots, varying in brightness as the clouds waxed and waned. The clouds and moonlight also brightened the sky in the image considerably.

You may have seen news reports about a largish (1Km) sized potentially hazardous asteroid, (7482) 1994 PC1, that will be flying by Earth over the next few days. It’s big enough that, even missing us by more than 1.24 million miles, it will be visible in scopes 4 inches or more in aperture.

Details may be found in this nice article by Bob King at Sky & Telescope, complete with finder charts: https://skyandtelescope.org/astronomy-news/see-a-large-stony-asteroid-race-across-the-sky/

The best viewing for us will be on Monday and Tuesday, but there are clouds and maybe rain (yay!) in our forecast. There is a chance the clouds will clear for us on Tuesday, when PC1 will be high in the southwest at 7 PM PST (0300 on 01/19 UTC), azimuth 225, altitude 60.

Watch the weather, and give it a look if you get a sucker hole!

Thank you for giving us this information.....

How feasible do you think a DART mission to be ? Obviously the sooner you catch one the "less" energy you need to deviate it enough to no longer be a danger .
Thanks for your infos as usual !

DART, as its name implies, is just a feasibility test, to find out how much they can deflect the asteroid with an impactor of known kinetic energy. We should get a lot of good information from it.

However, a lot also depends on the composition of the target asteroid. If it's a pretty solid hunk of rock or metal, an impactor can probably function well. If it's a loose rubble pile, or full of voids, the impactor may just disappear inside it and do practically nothing, or just blow it into pieces. In that case, the center of mass of the debris cloud will continue along essentially the same trajectory, and you end up with a shotgun blast coming your way, instead of a bullet. That could end up depositing lots of thermal energy throughout our atmosphere.

You could also try to cover an asteroid in white reflective paint, and let the momentum transferred by reflected sunlight alter its course, but that needs a lot of time to be effective.

Dr. Philip Lubin of UCSB has proposed using powerful lasers to heat one side of an asteroid, in effect acting as a rocket motor. Lately, he has pivoted to suggesting thermonuclear detonations, arguing that the resulting large cloud of small debris would be a less dangerous impactor.

Other approaches envision attaching a rocket motor or parking a dense mass next to the asteroid, but maneuvering it to keep away from the asteroid as it's attracted by gravity, towing it to one side.

Most of these techniques could only be used if you see the threat early, and all work better the farther away it is.

Putting up the crowded satellite constellations for internet is going to really hamper the synoptic telescopic surveys that are trying to spot hazardous asteroids, so keep your fingers crossed!

If the asteroid is a blown into pieces pile of rubble then each (small) piece would fly it's own way and enter the atmosphere in different places and smaller sizes and so (hopefully) burn more in the atmosphere than if it were one solid rock of the total combined mass and hence be "less likely" to make it all the way down with much impact potential.

Fond - Yes, but the total energy is still the same, and it has to go somewhere - in that case as heat into the atmosphere. I'm guessing it's more a case of less massive pieces decelerating more efficiently, and then falling to the ground, rather than ram heating the air and burning up.

The rocket motor idea makes me think of "The Expanse" (shameful plug for season 6 which just concluded the TV series adaptation).

it's my personal choice to be hit by asteroid. Freedom!

Dugin: Good one! Reminds me of the issues with the asteroid at hand that could actually have the desired effect on things! Let's hope it passes us by without anythings happening (like we usually have on days/times like this).

It's going to miss, by about 1.2 million miles.

Why is it "potentially hazardous" if it is 1.24 million miles away? That's around five times the distance from the earth to the moon.

"These are the asteroids considered hazardous because they are fairly large (at least 460 feet or 140 meters in size), and because they follow orbits that pass close to the Earth's orbit (within 4.7 million miles or 7.5 million kilometers). But being classified as a PHA does not mean that an asteroid will impact the Earth: None of these PHAs is a worrisome threat over the next hundred years. By continuing to observe and track these asteroids, their orbits can be refined and more precise predictions made of their future close approaches and impact probabilities."

Another little fact to drop into this article, illustrating how far we've come: Asteroids are given a number when their orbit is determined. This asteroid was discovered in 1994, and assigned number 7482 when there were enough observations to characterize its orbit. As of January 2022, the list of numbered asteroids is at 612,011.

How would you reinvent it

Racers use this straight away

By the way, UCSB Daily Nexus

Duke you are sympathetic of

Kind of kludged up here; the

This is just tragic. We heard

To be factual, Republicans

This is so very sad!! They

And Duke - about two hours