The California Transportation Commission recently awarded the City of Santa Barbara $15,000,000 to construct the Las Positas/Modoc Off-Street Bike Path. “This bike path project has been in the City’s plans since 1974. It is a legacy project for our community and is also a benefit to Californians by completing a gap in the Pacific Coast Trail,” said Public Works Director Rebecca J. Bjork.

The grant money will be used to construct 2.6 miles of Class I (multiuse) path along Las Positas and Modoc Roads for bicyclists, runners, and pedestrians of all ages and abilities. The project will provide key connections to local and regional destinations, schools (La Cumbre Junior High, SBCC), parks, and the beach. The project begins along Modoc Road at the western City limit (Calle de los Amigos), traveling to Las Positas. It then continues south for approximately 1.6 miles along Las Positas Road to Cliff Drive and Hendry’s Beach. The Las Positas Valley provides some of Santa Barbara’s best open space, with Arroyo Burro Creek and the Mesa coastal hills framing the scenery. It has a regional park (Elings) and a popular beach (Hendry’s). But Las Positas is also one of the most uncomfortable places to walk or bike because of high roadway speeds. Severe injuries and death have occurred along the corridor for both cyclists and pedestrians. The project will provide the community a safe way to experience the scenic beauty and connect cyclists and pedestrians safely to work, school, and recreation.

The project is made possible by the State of California’s SB1 funding, which is a recent gas tax added by state legislators. SB1 (the gas tax) has been placed on the November state ballot for a proposed repeal. If California voters repeal the gas tax, this project will no longer have funding and will not proceed.

The final design of the project is nearly complete. If the gas tax on this November’s ballot is not repealed by voters, the project is expected to complete construction by the end of 2020 or the beginning of 2021. 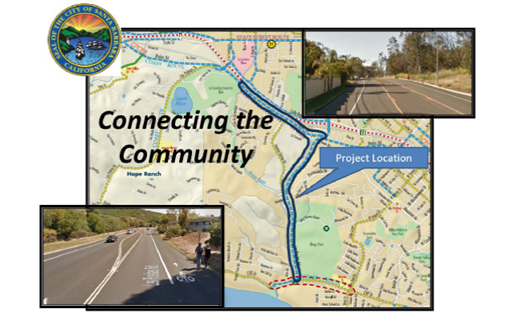 We are overlooking a huge possible savings on the price of the project. PITMIX can win the bid to construct the project with his budget projections, and its a Win-Win for the community. Anybody can bid, i will be awaiting for PITMIX to put his money where his mouth is and be a hero.

I mean really? The gas tax is that big a deal to you all? Two solutions: drive less or buy gas where they give you a discount for paying cash. I drive about 5000 miles per year and have paid cash only for over 40 years.

Not everyone has the luxury of choosing to simply "drive less." Glad you do though, must he nice!

Remember when the lottery showed up and 33% went to schools? So how'd that boondoggle work out?
Same scam different time.

Not to mention that California is a "Donor State". We have always sent way more tax money to Washington than we get back in Federal funding and grants.

This isn't actually true. Politifact says "In January 2017, the California Legislative Analyst’s Office said by several measures California is, indeed, a donor state, but just barely. It receives $0.99 in federal expenditures per dollar of taxes paid, which is below the national average return for states of $1.22 per dollar paid, according to its review of a 2015 New York Comptroller study." Hardly enough to cry about.

People wake up! The gas tax is a heist and a 15 million dollar path thats already in place is ludicrous ... If you agree to this path then its obvious you're not a SB Native or remotely close to having lived here for very long...I grew up in Hidden Valley, there has been a sufficient bike route/path in all directions since the '70's that links you to Goleta, the beach, and toward State St. What a joke I hope you like it when gas hits $5 dollar plus mark so you can give your monies to the local Road Construction Unions that have been robbing this community over and over rebuilding the streets over and over, never planning for population increase, Technology etc... Look around, you never stop seeing, these compaines working on the same streets, highways, corners, etc. They've redesigned this Las Positas overpass area 2 times now in my life now in which sufficient bike path rt away zones have been built into this latest reconstruction design, that specifically put into place a designated bike lane...Oh do you need imported trees and plantings and woodchips to make you feel better for 15 million dollars...

As a native you should also know how much this route is used by bikers. This is one of the heaviest biked routes in the area. Yes, there is a bike lane, but a dedicated path would save lives and likely convince a few more people to commute by bike. Is it absolutely necessary? ... No. Would it add value to the community?... absolutely yes.

I look forward to this bike path. It's in my neighborhood, and will greatly improve the bike ride to work, to the beach, and to junior high for the kids. Las Positas is pretty scary to bike along.

I do agree for these purposes the bike path improvement is going to make it safer and more appealing, but more taxation I feel is the wrong direction for a sustainable economy...

Pretty blatant bribery / coercion here. Do not repeal the gas tax and you will get a bike path. Kind of shady.....

It isn't "free money" but money that the people have allocated to be used for infrastructure and other good stuff. This is what democracy is about. While it may seem expensive, we cannot actually know the details as to what costs are involved. In any event it is much preferable to spend money on projects that employ folks in decent paying non-military jobs that make our community more livable. Or perhaps critics simply prefer to spend this money on a small portion of a jet fighter that will probably be obsolete in a couple of years.

We can actually know the details of how this is being spent because this is a democracy. The fact that the planners don't make this available through a weblink is just crazy. We deserve better.

Do we not all see the bribary ploy here?
Hey we've been awarded money!
We're going to build a bike path and everyone loves biking!
All the money is ready and we're almost ready to go.
That is, as long as you don't repeal the gas tax. For if you do, we're going to take it all away...

It's not our fault it's yours. We're going to take are ball and go home. My gosh. How do these people write like this? What's worse, how do people buy into it? You're going to bribe us with an over priced bike path? Then you're going to tell us the money is funded but we WILL take it away? How about... FIX THE ROADS THAT NEED IT FIRST! And take your gas tax and your fancy games and split.

Is that like 3 million a mile? Wow. Notice that no link is provided to the project budget so that we can understand if this is due to labor, materials, environmental reports, or who knows what. And what is the ridership on those streets so we know how many people will benefit? So far the gas tax overturn is winning in the polls so this project will not proceed anyway. Let's see what happens in November.

It astounds me how much these things cost. But heck, it is free money. Who cares?
I am a bike rider and am in construction. I've ridden Las Positas many times and never thought there was a problem.
The Beatles's song is always playing loudly in the background... "The Taxman".

Attaboy LOCALMATT, and tax shoes to pay for sidewalks.