Just because you're being responsible by isolating at home during the pandemic, it doesn't mean you can't keep your mind active. Almost everyone loves astronomy, and the night sky is still up there for you to enjoy on clear nights. And even if you don't go outside, the internet is full of learning opportunities, as well as citizen science projects to advance our knowledge of the Universe. At the end of this article, I have included numerous links to astronomy activities you can do at home with your family.

A citizen science activity that I enjoy is observing asteroid occultations for IOTA, the International Occultation and Timing Association. An occultation occurs when one object passes in front of another, like during a lunar or solar eclipse. In the case of asteroid occultations, an asteroid passes in front of a distant star, blocking the star's light for the time it takes the asteroid to transit. You might think the chance of that happening is pretty slim, but there are hundreds of thousands of cataloged asteroids with measured orbits, and millions of stars with measured positions. Even though the shadow path is essentially just the width of the asteroid as it sweeps across our planet, every month there are between a dozen and 30 such events for the Santa Barbara area.

IOTA publishes lists of predicted events, giving the date and time, path, duration, brightness drop, and other particulars. Here's a sample path map for an occultation on the night of April 6, 2020 that was passing nearby. 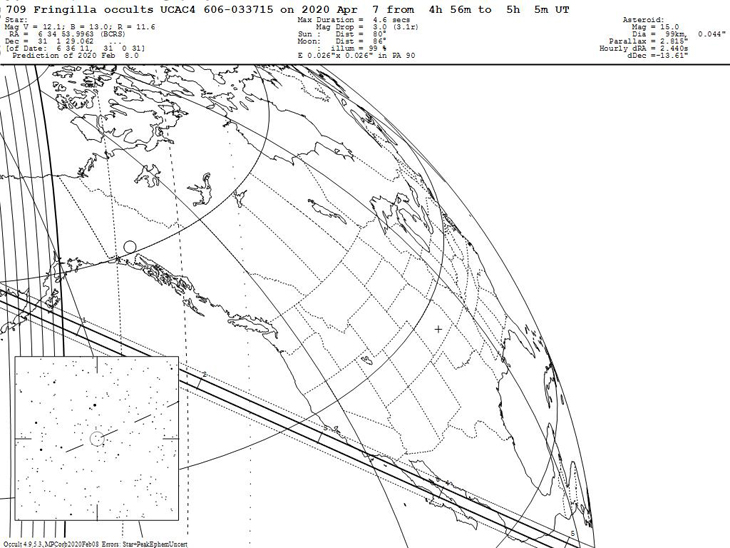 Not only was that night clear, even the asteroid's name, (709) Fringilla, made it an appealing target. It was discovered in 1911 by astronomer Joseph Helffrich at Königstuhl Observatory near Heidelberg, Germany. It is estimated to be about 61 miles across, and resides in the main belt of asteroids between Mars and Jupiter, with an orbital period just less that 5 years.

Virtually all asteroids are small enough that it's difficult to determine their size and shape with even large modern telescopes by direct imaging. Those parameters are estimated based on an assumed composition and reflectivity, mainly in infrared wavelengths, which are less affected by surface reflectivity. These shape and size measurements by direct imaging are subject to errors caused by variations in surface material and the changing angle of illumination as they orbit. But with careful observations of asteroid occultations, even amateurs may obtain very precise measurements of sizes and shapes, exceeding even the capabilities of the Hubble Space Telescope. For star positions, the measurements can be so precise that even the tiny gravitational bending of light caused by the Sun's mass must be taken into account!

Amateurs do this by recording a video of the disappearance and reappearance of the star along with precise timing and location data provided by GPS. Even a single observation provides information on the orbit of the asteroid and/or the position of the star, even if the occultation does not occur. Especially useful information is gathered when several observers distributed across the shadow path capture an occultation, because multiple chords can build up an image of the asteroid's shape. Here's the result for Fringilla. 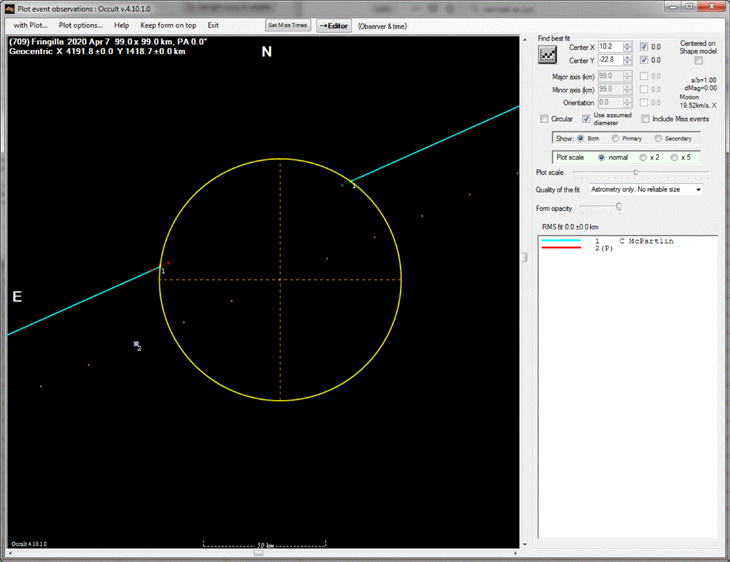 Unfortunately, I was the only observer for Fringilla, but here's the result from a February occultation where multiple observers were able to measure chords across the asteroid (451) Patientia. Some asteroids have conjectural shape models determined by changes in their reflectivity as the rotate, and multiple chord occultations may help in determining which shape models fit best. 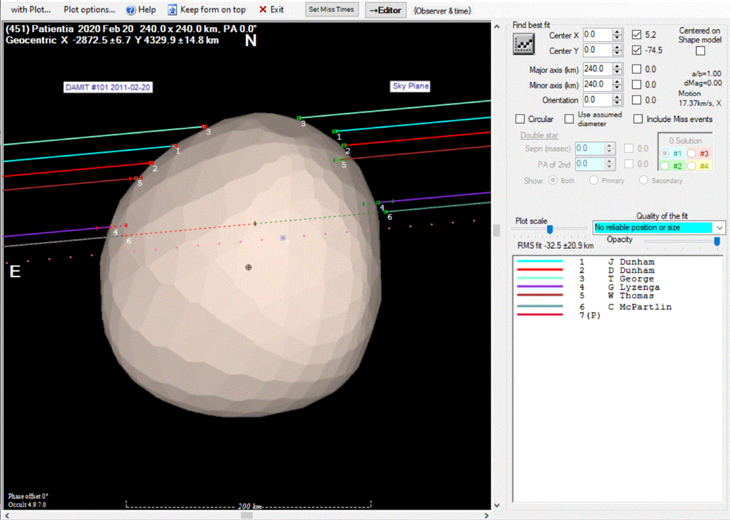 Some asteroids have even been found to be binary bodies, and the contact binary "snowman" shape of the Kuiper Belt object (486958) Arrokoth which was visited by the New Horizons spacecraft in 2019 was first hinted at in occultation data.

Even fairly small amateur telescopes are capable of making these observations. My telescope has only five inches of aperture, but by recording video from a modified sensitive monochrome security camera to my laptop, with overlaid timing and location from a GPS-equipped VTI (Video Time Inserter), I can collect useful data, including a detection of Pluto's atmosphere during an occultation in August of 2018. The asymmetry in the light curve is because my chord across Pluto was not at a central angle, and passed through different depths of its atmosphere.

If you have an interest in Nature, even an armchair interest, look around on the web to see whether you can combine having fun with advancing our knowledge of the Universe!

Links for a Cloudy Evening

A number of online resources can help you refresh or extend your astronomy knowledge.  Here are some that could be of use:

POTIF - SB Nature from Home, Globe at Night, NASA at Home, and the homeschool resources would be worth a look.

Thank you for this informative, interesting info. Appreciated!

Are any of these that might be good for youngsters? I am mainly thinking around 9 years old.

SBLife: No thanks for your

Businesses that can't hack it