SBIFF’s Executive Director Roger Durling stated, “For 35 years, SBIFF has been a reflection of the city that hosts this festival - inclusive - diverse - intelligent - warm and welcoming. Celebrating cinema and all of its aspects - has become the conduit to bring together visitors from near and far, locals, old friends - and national and international artists to our beloved town. We're proud of our festival, and grateful for your love and support throughout all these years.”

Presented by UGG®, the festival will feature 47 world premieres from 50 counties and 71 U.S. premieres, as well as the usual tributes, panels, and outreach programs. 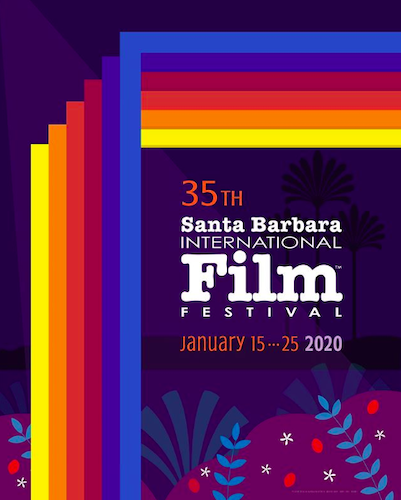 The Opening Night Film will take place on Wednesday, January 15, at the historic Arlington Theatre with the U.S. Premiere of "A Bump ALong the Way" directed by Shelly Love and starring Bronagh Gallagher, Lola Petticrew, Mary Moulds, Dan Gordon and Brendan Farrell.

The female-led, feel-good, comedy-drama is set in Northern Ireland and features a middle-aged woman whose unexpected pregnancy after a one-night stand acts as the catalyst for her to finally take control of her life and become the role model her teenage daughter needs and craves.

Following the film, the Opening Night Gala will take place at the Paseo Nuevo Mall in downtown Santa Barbara.

For the Closing Night Film, SBIFF highlights the local Santa Barbara area with a series of short documentaries by local filmmakers. This distinctive selection of films covers a range of iconic people and places in the Santa Barbara area including immigrant farm workers, an aging bronco rider, a female cyclist that defied all odds, backpackers exploring the Los Padres National Forest, artists documenting the breathtaking landscapes of the Carrizo Plain, and a celebrated local guitarist who performs in parking garages and public spaces throughout downtown Santa Barbara.

The closing night films will take place on Saturday, January 25, as the 35th annual SBIFF comes to a close.

For more information and to purchase tickets for any of the SBIFF events, visit www.sbiff.org.

Herbert Bayer designed the chromatic gate to be placed on the beach, so people could look at the sunset through it. Instead the city overruled his intent and stuck it on the edge of the vagrant sport field. And don't forget Herbert died because he was walking here and was hit by a car. We did not do well by that elderly genius. It is typical of Santa Barbara not to mention his name as the creator of the Gate in the press release, and typical of EdHat to write this: "poster featuring the Chromatic Gate and official lineup for this year's festival" when in fact there is no "lineup" on the poster.

@LUCKY 777 I’m in total agreement, except for your deliberate misinterpretation. The poster and the lineup were unveiled. (Dear kids, grammar is important and this is why)

I gave up commenting/countering/arguing years ago. I love the sculpture. I love the poster. So hate me. :-)

You are SO right! lol. Okay, I gave up countering/arguing.

YIN YANG. Yet here you are again, opining on it.

Over the years there have been a lot of negative remarks about the gate. We are lucky to have a Herbert Bayer work in our town. Hope that people can find a way to enjoy it - I like it.

The "gate" has finally found it's usefulness. Makes a beautiful poster.

Love the gate and the poster is beautiful. Very classy. The best one so far.

Wonderful work of art by local artists Herbert Bayer who, at the time, was known as the last surviving master of Germany’s renowned Bauhaus school.

Can't stand the "gate," but the colors do make for a dynamic poster.

just an opinion ......possibly the ugliest piece of "art" in the Region

@CORALINE JONES Thanks for adding your 2¢ to the conversation.

I could tell immediately that the order of colors/geometry is wrong...

Factotum, that's not what I'm talking about. The artist mirrored the actual design, probably to make it look better on their poster. If you are looking at the "blue" side in reality, it angles away in the opposite direction. Not a big deal, just super obvious to me after seeing it for decades.

It is not a "rainbow" gate. It is titled a chromatic gate. Herbert Bayer chose the particular colors and order; not Roy G. Biv..

VOR, when it comes to the

Thx for bringing a smile to

No where near a bad as

I want to thank Mr. Adrian

Wear your mask and keep your

I have recently seen deer