A comet visible to the naked eye (easier with binoculars) has been seen for several weeks.  Known as Comet 46P/Wirtanen, it was discovered by astronomer Carl Wirtanen in 1948 and appears now at its brightest in 20 years.

Don't get excited, because it is a very tiny greenish smudge, nowhere the equal of such wonders as Comet Hale-Bopp, for example.

Never-the-less, I was anxious to view and photograph it.  Having been thwarted in that effort due to a recent bright moon and passing clouds and overcast skies, we were given a clear window on Christmas Eve.

The first photo was taken with a 50mm lens, selected to give a view that closely approximates our normal field of vision.  Thus, the comet and stars appear in the photo at close to the same size as we would see them with our naked eye.  Overhead power lines are included to give a sense of scale and proportion. Clouds are seen moving through the bottom of the scene during the time exposure.

The second photo gives a slightly closer detail view of this elusive orb. 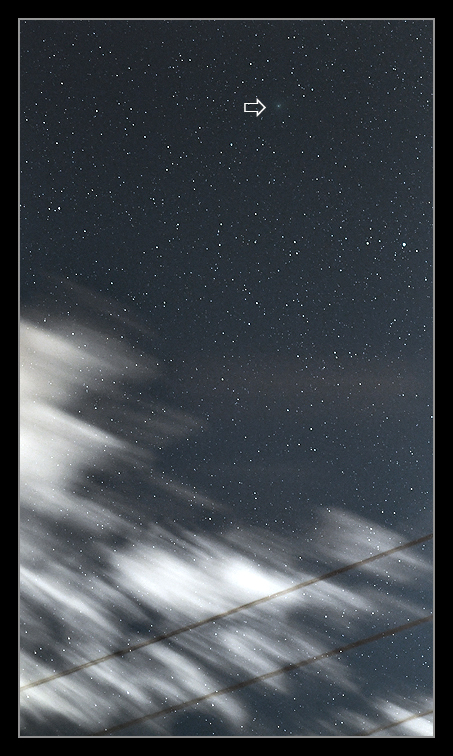 Thanks for the reminder! I also considered last week but the moon was up. According to Stellarium, the comet will be in the northeast before the moon rises at 9:40p tonight. If you bring your binoculars, the Andromeda galaxy will also be in the sky to the west (will also look fuzzy but cool knowing it's a galaxy 2.5 Million light years away).

Good to hear you captured Andromeda. I was able to grab a few APS-C camera-only images of the comet up on Camino Cielo but conditions were marginal given the clouds and light pollution from Carpinteria. Oh to be in dark skies.

EASTBEACH: OP here - Thanks for the reminder yourself. Just came in from photographing the Andromeda galaxy. Decent pix considering I was only shooting with camera alone and not attached to my 8" Meade Schmidt-Cassegrain.

You're welcome. Always a real treat to spy an otherworldly object, in this case one that is about half-a-mile wide and 6.5 million miles away.

Spaceweather.com keeps track of several interesting things and regularly has photos of cool things such as the northern lights and comets. The newest addition to the site is the Thermosphere Climate Index which is the output of the SABER Satellite which has a link to explain it. This is found on the left hand side below the sunspot data. In short the drop in sunspot activity is causing a cooling of the atmosphere >100km above the surface of the earth. The article on the SABER Satellite discusses this.

SHASTA GUY, thank you for the information. Interesting.

Nice. I’ve been following it at Spaceweather.com.

DBD, is it all vaccinations

Watch the time on the clock,

VOICE - none of those quotes

"“There’s no reason to be

Pitmix, is that why she didn

Or you could send it to Rowse

Find me where he said masks