Earth Day is celebrated worldwide on April 22 and has ushered in promising legislation throughout the globe for Mother Earth. Although for Santa Barbarans, Earth Day means much more.

For those who have lived here long enough, 1969 was the year everyone became intimately aware of human's effect on the environment. On January 28, a well drilled by Union Oil Platform A off the coast blew out. More than three million gallons of oil spewed, killing over 10,000 seabirds, dolphins, seals, and sea lions.

Local activists banned together to create environmental regulation, education, and in effect, Earth Day. That's right, in case you didn't know, Earth Day was founded in Santa Barbara. We have Selma Rubin, Marc McGinnes, Bud Bottoms, and many more to thank for this.

On the first anniversary of the oil spill, January 28, 1970, Environmental Rights Day was celebrated locally. A Declaration of Environmental Rights was written by Rod Nash during a boat trip across the Santa Barbara Channel while carrying a copy of Thomas Jefferson's Declaration of Independence. Many activists and local politicians spoke during the event that drew a giant and passionate crowd ready to enact change. 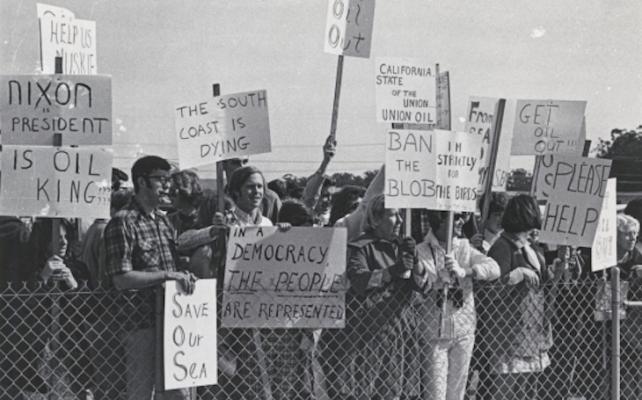 Environmental Rights Day organizers had been working closely with then-Congressman Pete McCloskey to consult on the creation of the National Environmental Policy Act, the first of many new environmental protection laws sparked by the oil spill. Wisconsin Senator Gaylor Nelson also founded Earth Day during an environmental teach-in first held on April 22, 1970. Local activists also went on to develop the first undergraduate Environmental Studies program of its kind at the University of California at Santa Barbara.

Today, Santa Barbara holds to its traditions and continues an annual Earth Day Festival. The Community Environmental Council (CEC) pioneers real-life solutions in areas with the most impact on climate change. CEC’s annual Santa Barbara Earth Day Festival prides itself on making it one of the cleanest, greenest, and most sustainably-minded events around, improving every year.

The CEC will host its 2021 Santa Barbara Earth Day Festival virtually this year from Thursday, April 22 to Saturday, April 24. There will be conversations with climate leaders, musical performances and art contests, the ability to connect with eco-minded exhibitors, and the option to learn how you can lean into climate action at this urgent moment.

Learn more and livestream the event on SBEarthDay.org from anywhere you are.

If you care about your community, sign up with Caltrans to do Adopt a Highway. The SB/Montecito/Goleta stretch needs attention, especially with all the homeless encampments hidden in the bushes. Get a group together and sign up with caltrans. You have to work once a month. If you have a dozen or so volunteers, it shouldn't take longer than 2 hours. If you own a business, you can hire an approved contractor. Key is making sure the work is done monthly. The stretch through this area is one of the most trashed in the state. We can do better.

I just read a man on FB