In a surprise move, the owners of El Dorado Farms on Highway 246 west of Buellton recently withdrew their proposal for 35 acres of cannabis under hoop-houses next to the Pence Vineyards & Winery, county records show. The project had generated bitter opposition from some vintners and residents in the region.

Blair Pence, who heads the Santa Barbara Coalition for Responsible Cannabis, a countywide nonprofit group that has sued several growers on 246, appealed to the county Planning Commission last fall to overturn the project. Pence told the commissioners that the stench of cannabis from El Dorado would jeopardize his tasting room and equestrian business and discourage wine tourism in the Sta. Rita Hills, the federally-designated American Viticultural Area between Lompoc and Buellton.

“It appears that this project is dead,” Pence said this week. “I couldn’t be more pleased.”

Eva Turenchalk, an agent for the El Dorado owners, Kevin Kruse of Santa Barbara and his son, Ryan Kruse of Solvang, said their decision to withdraw the project at 1807 W. Highway 246 “was made as a result of competing business interests for the Kruse Family, and was not related to the appeal of the project.”

“At this time, the Kruse family will be focusing on their family business and other interests, and so they have made the difficult decision that this would not be the time to undertake a new venture,” Turenchalk wrote in a Jan. 3 email to the county Department of Planning & Development. In an email to this reporter, she added, “We feel confident that we would have succeeded on the appeal issues.”

The Kruses’ withdrawal comes during a glut on the market for the cannabis industry in California and a sharp downturn in prices, compared to a year ago. Outdoor growers are hardest hit; they can’t command the higher prices that greenhouse growers get for their product. 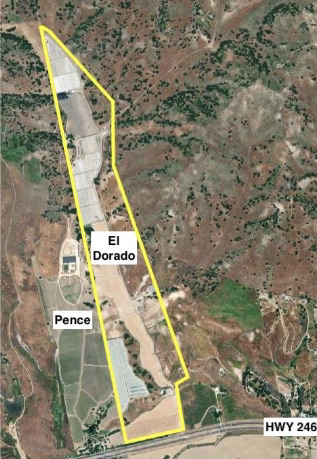 The El Dorado Farms property is about two miles from Buellton; the city had opposed the cannabis project because the smell from other "grows" in the vicinity permeates city neighborhoods during harvest seasons. (Photo taken from a slide presentation for the county)

Before it was withdrawn, the Kruses’ cannabis project, called El Dorado Gardens, had been heard by the commission on Nov. 8 and was scheduled for a second hearing in early February. The commissioners voiced concerns about well water supplies for the project and the lack of a plan for handling odors and complaints. And for the umpteenth time, they expressed frustration with the county’s permissive cannabis ordinance, which doesn’t require odor abatement plans for large agricultural properties such as the Kruses’.

“Really, the original sin here is the ordinance, and we can’t rewrite that, as much as we’d like to,” said Commissioner John Parke, who represents the Sta. Rita Hills.

Pence told the commission that his asthma had worsened and his wife Dianne had suffered splitting headaches for two years from the pungent smell of an illegal cannabis “grow” at the same location that was being proposed for El Dorado Gardens. The grow, which was under different ownership, was finally raided and shut down in 2019. By then, sales of wine at the tasting room, the bread and butter of his operation, had plummeted, Pence said, and one of the vineyard wells had started spewing up sand because of the excessive pumping for pot next door.

“There’s nothing theoretical about the effects here,” he told the commission. “We’ve already lived through them.”

The City of Buellton supported Pence’s appeal, noting that Buellton was already experiencing significant odors during several months of the year from the handful of cannabis grows currently operating west of town. These total about 100 acres and are located outside the Sta. Rita Hills. To date, the county has approved permits for about 335 acres of cannabis in the Sta. Rita Hills; most of these operations are not yet up and running.

“As impacts due to cannabis cultivation continue to mount unabated as more cannabis grows are authorized, Buellton residents have begun to question whether the County has their best interests at heart,” City Manager Scott Wolfe wrote in a Nov. 8 letter to the commission.

The county should “implement some sort of reasonable control,” either by limiting concentrations of cannabis or requiring odor abatement and monitoring, Wolfe said: “To date, none of these actions on the part of the County appear to have taken place.” 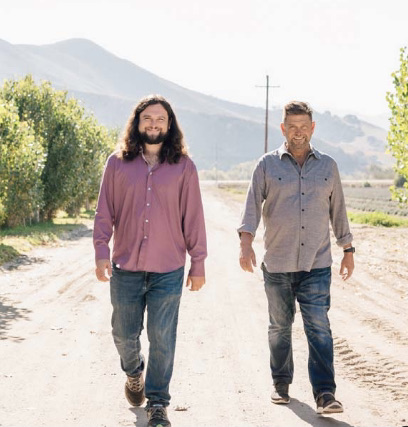 Ryan Kruse, left, and Kevin Kruse, recently withdrew a proposal to grow 35 acres of cannabis at El Dorado Farms, a 183-acre property at 1807 W. Highway 246. (Photo taken from a slide presentation for the county)

As things stand now, county officials said, the Kruses could resubmit the same cannabis project or a different project at a later date, but they would have to start at the beginning of the application process and would lose their place in line for a business license under the county’s 1,575-acre cap for outdoor cannabis in unincorporated areas.

The cap was reached last month, and the county has invited the first two operators on the cannabis wait list to submit their business applications in place of the Kruses. They are Tranquillity AGI, LLC, for nine acres of cannabis at 2753 Gypsy Canyon Road in Lompoc; and 9451 Cultivators, LLC, for 30 acres of cannabis at 9451 Batchelder Rd. in Los Alamos.

The Kruses come from a California agribusiness family that goes back generations in diary farming, cattle ranching and crop production for feed. In 2020, they bought the 183-acre ranch west of Buellton, part of the old Skytt Ranch, and began farming organic raspberries, lavender and row crops there, in addition to grazing long-horned cattle. Those operations will continue on the property, Turenchalk said.

County records show that the Kruses proposed to harvest cannabis two or three times per year “to enhance productivity on this historical agricultural property,” specifically, on a narrow strip of land stretching along two miles of the Pences’ property. They planned to process their cannabis at a 17,000 square-foot building they had purchased for that purpose in Grover Beach. The Kruses also own and operate a cannabis distribution and manufacturing plant in Grover Beach.

The El Dorado team had argued that the project would significantly reduce the historic water use on the property because cannabis would replace water-guzzling peppers, hay and feed grass. As for the smell from past cannabis there, Turenchalk told the commission last fall that the illegal operators that were busted had been processing cannabis onsite, likely cutting and drying the plants and worsening the smell; and, she said, they may have been growing on up to 100 acres.

“We truly believe our odor impact is going to be negligible,” she said.

But the commissioners had questions on several fronts. They asked for another hearing on the project so that county staff could study how pumping well water for cannabis would affect the underground recharge to the Santa Ynez River. They suggested that the Kruses consider two, not three harvests per year and come up with an odor management plan.

Chair Larry Ferini, who represents a portion of the Sta. Rita Hills, asked the El Dorado team, “Have you considered a larger buffer? … Buellton is not interested in receiving more smells … It would be nice to see some goodwill expressed from you and your group. Do you have a plan, or are you going to stand there and say, ‘It’s our right and we don’t care’?’’

Show Comments
Cannabis Project Next to Pence Vineyards is Withdrawn

This is good news and I am happy for those who did not want the project. El Dorado and the Kruses have lots of projects and are very well off. Why do they need more? Always more?

That operation that was already there puts out lots of really bad odors. When you drive by, you can almost 'taste' it, the smell is so strong. This is great news for residents/businesses east of there into Buellton. County Planning must do something to right the wrongs of their terrible ordinances.