On Sunday (1/13/19), Ladouceur arrived at the Chula Vista Campground located near the summit of Mount Pinos.  She parked in the parking lot of the snow play area and hiked a short distance to the campground where she had planned to camp in the snow for a few days.  On Monday afternoon, a significant winter snow hit the area and Ladouceur was not prepared for the accumulation of snow which the summit received.  Ladouceur retreated to her vehicle and began to call for assistance.  At approximately 1630 hours, Lockwood Deputies were notified and responded to the area.  As the deputies attempted to reach the stranded camper, the heavy snow fall on the road leading up to the summit became impassable even for the deputies 4X4 vehicles. 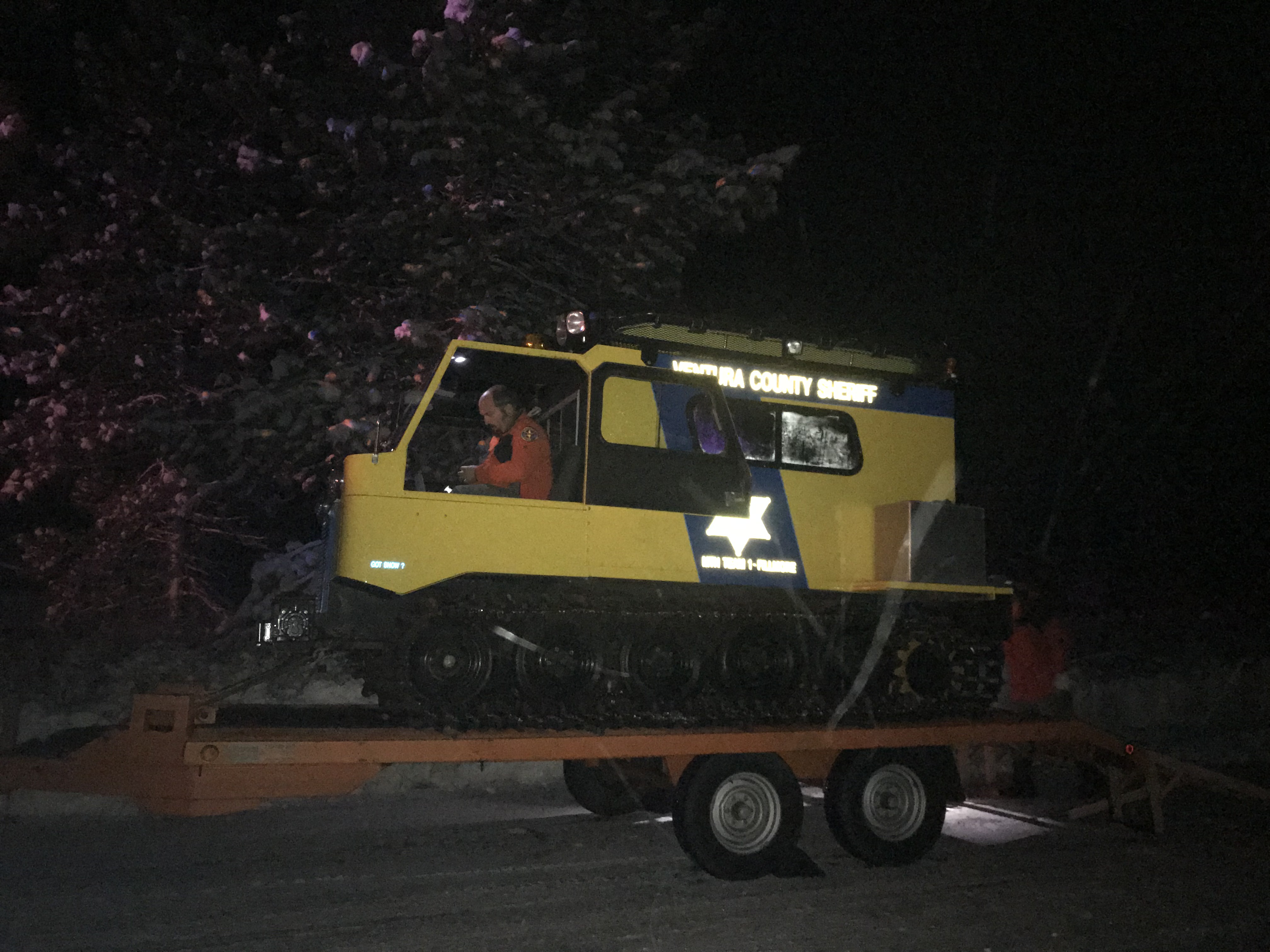 The Fillmore Search and Rescue Team along with Kern County Search and Rescue were activated and responded to the area with special Snowcat vehicles that are designed to operate in deep snow conditions.  As the temperature dropped and snow continued to fall, the two search and rescue teams worked together to reach the summit and safely rescue Ladouceur who had sought refuge in her vehicle.  Ladouceur was transported by Snowcat to the command post where she was taken to Lebec and reunited with her family.

Ventura County Sheriff’s and Kern County Sheriff’s Search and Rescue Teams are made of community volunteers who train and devote countless hours in preparation for scenarios just like this.

Toggle Comments (Show)
Camper Rescued from Mount Pinos During Snow Storm
This case has two stories. The first is a woman who chooses to go sleep in the deep. She wants to sleep in the snow and knew what she was getting into. She simply became overwhelmed when cut off from society, realizing her car couldn't drive her out. That's fear. I'm sure she was prepared and as uncomfortable as it got, prepared enough with supples, warmth, food and water to survive throguh this. Her car alone offered refuge for a few nights shelter. The other story is about boys being boys and having fun with their toys! That Snow Cat looks awesome! Of course sure, they'd have much rather been warming by a fire somewhere. They had work to do and did it well.
Camper Rescued from Mount Pinos During Snow Storm
Who doesn’t check the weather before HEADING OUT ALONE TO A HIGH ELEVATION AREA IN THE SNOW. Stupidity knows no bounds.
Camper Rescued from Mount Pinos During Snow Storm
There was nothing unexpected about a snow storm at that elevation when there were several days of rain expected in the area.
Camper Rescued from Mount Pinos During Snow Storm
Local weather forecast was 2 feet of snow at over 5,000 feet and campground was closed due to government shut down . Think she might of wondered why she was the only one up there at 8,300 ' Hope she put the $ 10 per night fee in the box.
Please Login or Register to comment on this.