Around 1:30pm, the subject that unlawfully entered the home near the area of Verano Drive and San Martin Way was safely taken into custody without incident.

SBPD Crisis Negotiators, who work in collaboration with the Santa Barbara County’s Behavioral Science Unit Manager, attempted dozens of times to communicate with the suspect in hopes of him surrendering. All forms of verbal communication failed, and the suspect refused all requests from law enforcement.

At one point prior to arrest, the suspect had armed himself with a wine bottle. The home fortunately had large glass windows that provided Officers a clear view into the residence where they were able to monitor most of the subject’s actions. Once the suspect had disarmed himself of the wine bottle, SWAT members entered the home to take the suspect into custody. A search and arrest warrant was authorized prior to entry.

The suspect, identified as German Hernandez Jr., a 27-year-old transient was arrested in a bedroom on the second level of the home. During the arrest, Hernandez Jr. resisted and spat at Officers.

Hernandez Jr. was not injured but was transported to Cottage Hospital Emergency Room for a medical clearance and evaluation. Once medically cleared, Hernandez Jr. was taken to Santa Barbara County Jail and booked for Committing a Felony while out on Bail (felony), Burglary (felony), Looting During a State of Emergency (felony), Resisting Arrest (misdemeanor), and Prowling (misdemeanor). He was booked on $75,000 bail.

Hernandez Jr. had just been released from jail yesterday for a similar incident that occurred in the County of Santa Barbara earlier this week.

The reason Hernandez Jr. entered the home is still under investigation and is not known at this time.

The family dog was found safe in the house and was reunited with their owners.

The roads were re-opened shortly after the incident had concluded. 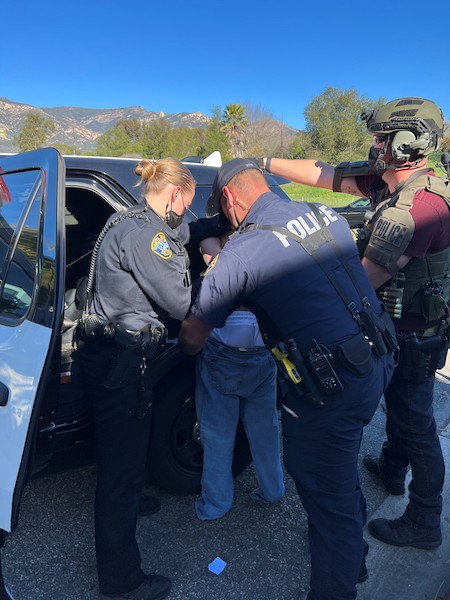 On January 6, 2022, around 09:21am, the Santa Barbara Police Combined Communications Center received a report about a burglary in progress from a resident in the area of Verano Drive and San Martin Way. The resident informed dispatchers that her and her younger daughter had locked themselves in an upstairs bathroom and a subject unknown to them was still inside the home.

Multiple officers responded to the area and were able to safely extricate the residents from a second story bathroom window using a fire department ladder.

It is believed there is one male suspect inside the residence at this time and he is refusing all verbal commands to exit the home. A perimeter has been established and SWAT, Crisis Negotiation Team, and County Mental Health are currently on scene.

This situation is currently unfolding. No further information at this time.

Hearing a large Sheriff Deputy response on the scanner on San Martin Way, off Highway 154 in the unincorporated SB area.

Something about a burglary suspect being barricaded or hiding. Streets are closed in the area. 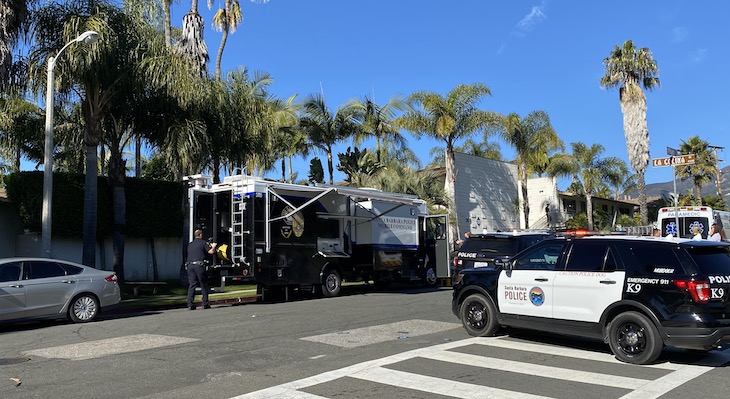 CA law: Any person using force intended or likely to cause death or great bodily injury within his or her residence shall be presumed to have held a reasonable fear of imminent peril of death or great bodily injury to self, family, or a member of the household when that force is used against another person, not a member of the family or household, who unlawfully and forcibly enters or has unlawfully and forcibly entered the residence and the person using the force knew or had reason to believe that an unlawful and forcible entry occurred. As used in this section, great bodily injury means a significant or substantial physical injury.

CONSERVATIVE - and you'd be going to jail. Shooting (presumably as we all know your love of guns) a clearly unarmed (if he's naked without a holster) person who walks into your home, is likely unjustifiable unless they're attacking you or putting your life in danger. Naked homeless guy? Come on....

Apparently, a (supposedly) homeless person walked into a home on the corner and barricaded himself inside the residence - and decided to get naked. There was a mother and daughter home at the time, and I believe they were able to get out safely. LE is trying to get the man out of the house now.

That's somewhat of an ironic

I should have added that

"Do I go to Parler and cry

The GOP is dead - backing